Rock And Roll 15 Here To Stay! 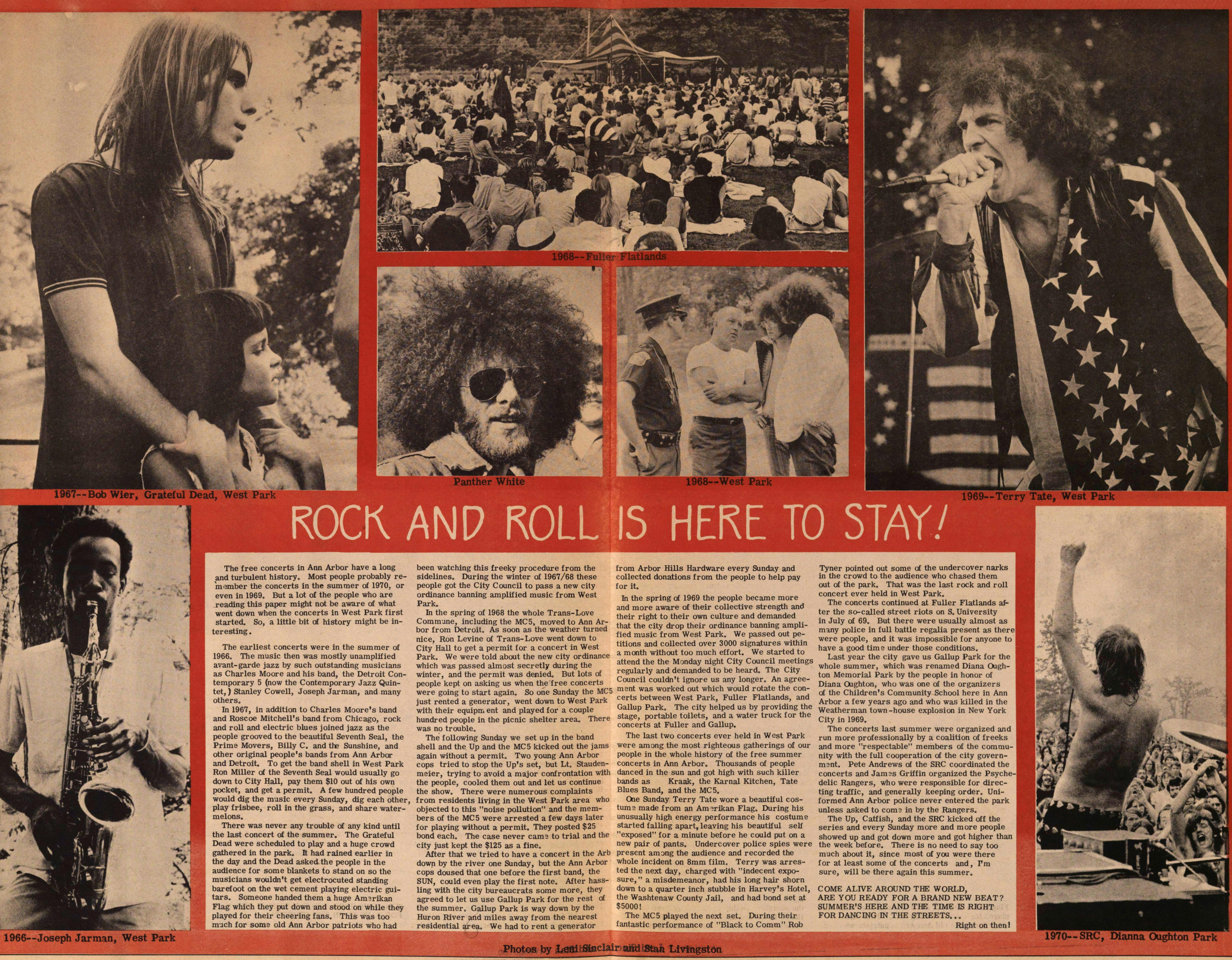 The free concerts in Ann Arbor have a long and turbulent history. Most people probably remember the concerts in the summer of 1970, or even in 1969. But a lot of the people who are reading this paper might not be aware of what went down when the concerts in West Park first started. So, a little bit of history might be interesting.

The earliest concerts were in the summer of 1966. The music then was mostly unamplified avant-garde jazz by such outstanding musicians as Charles Moore and his band, the Detroit Contemporary 5 (now the Contemporary Jazz Quintet, ) Stanley Cowell, Joseph Jarman, and many others.

In 1967, in addition to Charles Moore's band and Roscoe Mitchell's band from Chicago, rock and roll and electric blues joined jazz as the people grooved to the beautiful Seventh Seal, the Prime Movers, Billy C. and the Sunshine, and other original people's bands from Ann Arbor and Detroit. To get the band shell in West Park Ron Miller of the Seventh Seal would usually go down to City Hall, pay them $10 out of his own pocket, and get a permit. A few hundred people would dig the music every Sunday, dig each other, play frisbee, roll in the grass, and share watermelons.

There was never any trouble of any kind until the last concert of the summer. The Grateful Dead were scheduled to play and a huge crowd gathered in the park. It had rained earlier in the day and the Dead asked the people in the audience for some blankets to stand on so the musicians wouldn't get electrocuted standing barefoot on the wet cement playing electric guitars. Someone handed them a huge American Flag which they put down and stood on while they played for their cheering fans. This was too much for some old Ann Arbor patriots who had been watching this freaky procedure from the sidelines. During the winter of 196768 these people got the City Council to pass a new city ordinance banning amplified music from West Park.

In the spring of 1968 the whole Love Commune, including the MC 5, moved to Ann Arbor from Detroit. As soon as the weather turned nice, Ron Levine of Love went down to City Hall to get a permit for a concert in West Park. We were told about the new city ordinance which was passed almost secretly during the winter, and the permit was denied. But lots of people kept on asking us when the free concerts were going to start again. So one Sunday the MC 5 just rented a generator, went down to West Park with their equipment and played for a couple hundred people in the picnic shelter area„ There was no trouble.

The following Sunday we set up in the band shell and the Up and the MC 5 kicked out the jams again without a permit. Two young Ann Arbor cops tried to stop the Up's set, but Lt„ Staudenmeier, trying to avoid a major confrontation with the people, cooled them out and let us continue the show. There were numerous complaints from residents living in the West Park area who objected to this "noise pollution" and the members of the MC 5 were arrested a few days later for playing without a permit. They posted $25 bond each. The case never came to trial and the city just kept the $125 as a fine.

After that we tried to have a concert in the Arb down by the river one Sunday, but the Ann Arbor cops doused that one before the first band, the SUN, could even play the first note. After hassling with the city bureaucrats some more, they agreed to let us use Gallup Park for the rest of the summer. Gallup Park is way down by the Huron River and miles away from the nearest residential area. We had to rent a generator from Arbor Hills Hardware every Sunday and collected donations f rom the people to help pay for it.

In the spring of 1969 the people became more and more aware of their collective strength and their right to their own culture and demanded that the city drop their ordinance banning amplified music from West Park. We passed out petitions and collected over 3000 signatures within a month without too much effort. We started to attend the the Monday night City Council meetings regularly and demanded to be heard. The City Council couldn't ignore us any longer. An agreement was worked out which would rotate the concerts between West Park, Fuller Flatlands, and Gallup Park. The city helped us by providing the stage, portable toilets, and a water truck for the concerts at Fuller and Gallup.

The last two concerts ever held in West Park were among the most righteous gatherings of our people in the whole history of the free summer concerts in Ann Arbor. Thousands of people danced in the sun and got high with such killer bands as Kraak, the Karnal Kitchen, Tate Blues Band, and the MC 5.

One Sunday Terry Tate wore a beautiful costume made from an American Flag. During his unusually high energy performance his costume started falling apart, leaving his beautiful self "exposed" for a minute before he could put on a new pair of pants. Undercover police spies were present among the audience and recorded the whole incident on 8mm film, Terry was arrested the next day, charged with "indecent exposure," a misdemeanor, had his long hair shorn down to a quarter inch stubble in Harvey's Hotel, the Washtenaw County Jail, and had bond set at $5000!

The MC 5 played the next set. During their fantastic performance of "Black to Comm" Rob Tyner pointed out some of the undercover narks in the crowd to the audience who chased them out of the park. That was the last rock and roll concert ever held in West Park.

The concerts continued at Fuller Flatlands after the so-called street riots on S. University in July of 69. But there were usually almost as many police in full battle regalia present as there were people, and it was impossible f or anyone to have a good time  under those conditions.

Last year the city gave us Gallup Park for the whole summer, which was renamed Diana Oughton Memorial Park by the people in honor of Diana Oughton, who was one of the organizers of the Children's Community School here in Ann Arbor a few years ago and who was killed in the Weatherman town house explosion in New York City in 1969.

The concerts last summer were organized and run more professionally by a coalition of freaks and more "respectable" members of the community with the full cooperation of the city government. Pete Andrews of the SRC coordinated the concerts and James Griffin organized the Psychedelic Rangers, who were responsible for directing traffic, and generally keeping order. Uniformed Ann Arbor police never entered the park unless asked to coma in by the Rangers.

The Up, Catfish, and the SRC kicked off the series and every Sunday more and more people showed up and got down more and got higher than the week before. There is no need to say too much about it, since most of you were there for at least some of the concerts and I'm sure, will be there again this summer.

COME ALIVE AROUND THE WORLD, ARE YOU READY FOR A BRAND NEW BEAT? SUMMER'S HERE AND THE TIME IS RIGHT FOR DANCING IN THE STREETS. . . Right on then!!