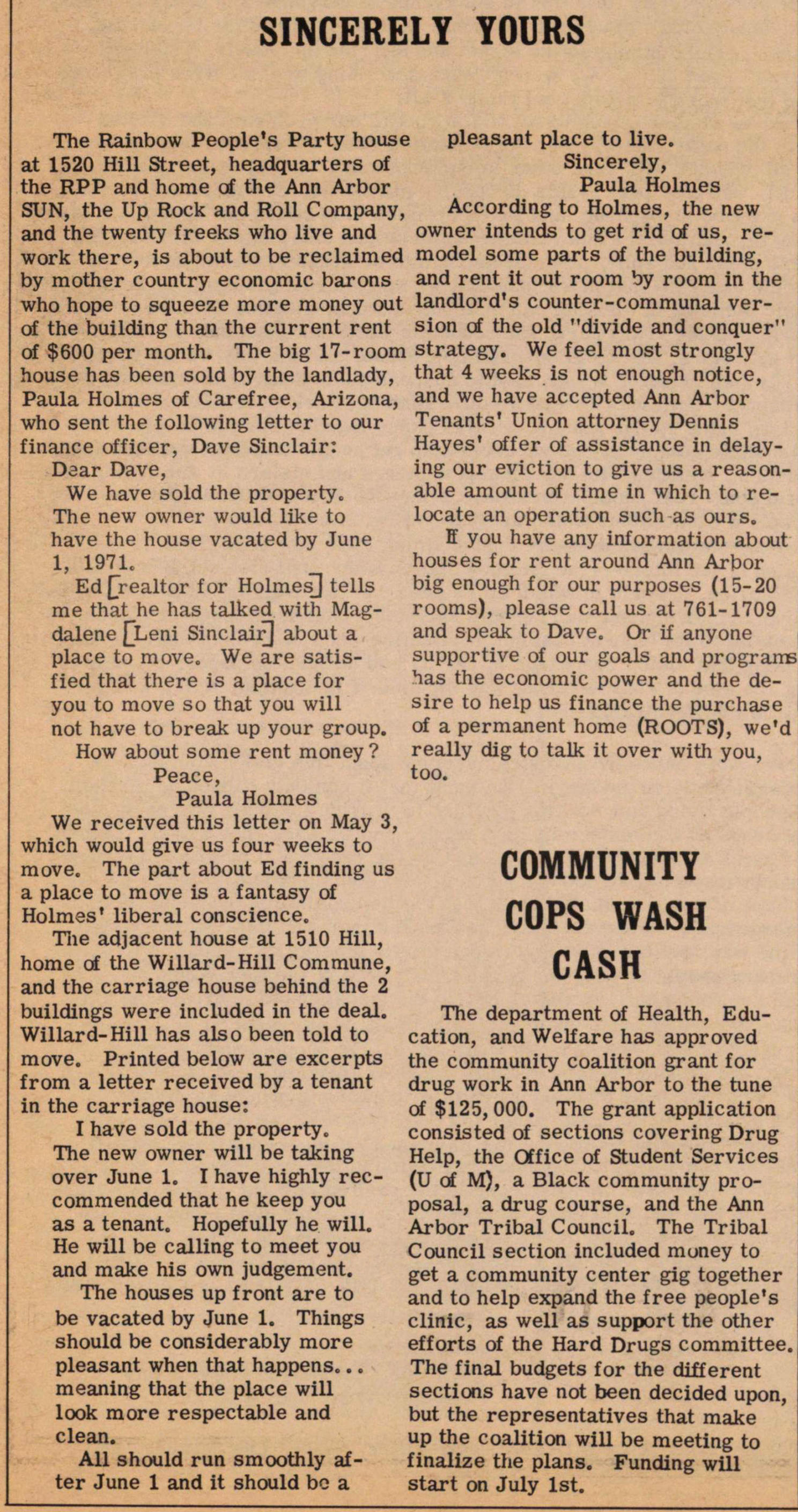 The Rainbow People's Party house at 1520 Hill Street, headquarters of the RPP and home of the Arm Arbor SUN, the Up Rock and Roll Company, and the twenty f reeks who live and work there, is about to be reclaimed by mother country economie barons who hope to squeeze more money out of the building than the current rent of $600 per month. The big room house has been sold by the landlady, Paula Holmes of Carefree, Arizona, who sent the f ollowing letter to our finance officer, Dave Sinclair: Daar Dave, We have sold the property. The new owner would like to have the house vacated by June 1, 197L Ed [realtor f or Holmes] tells me that he has talked with Magdalene [Leni Sinclair] about a place to move. We are satisfied that there is a place for you to move so that you will not have to break up your group. How about some rent money ? Peace, Paula Holmes We received this letter on May 3, which would give us four weeks to move. The part about Ed finding us a place to move is a fantasy of Holmes' liberal conscience. The adjacent house at 1510 Hill, home of the Willard-Hill Commune, and the carriage house behind the 2 buildings were included in the deal. Willard-Hill has als o been told to move. Printed below are excerpts from a letter received by a tenant in the carriage house: I have sold the property. The new owner will be taking over June 1. I have highly reccommended that he keep you as a tenant. Hopefully he will. He will be calling to meet you and make his own judgement. The houses up front are to be vacated by June 1. Things should be considerably more pleasant when that happens. . . meaning that the place will look more respectable and clean. All should run smoothly after June 1 and it should bc a pleasant place to live. Sincerely, Paula Holmes According to Holmes, the new owner intends to get rid of us, remodel some parts of the building, and rent it out room by room in the landlord's counter-communal version at the oíd "divide and conquer" strategy. We feel most strongly that 4 weeks is not enough notice, and we have accepted Ann Arbor Tenants' Union attorney Dennis Hayes' offer of assistance in delaying our eviction to give us a reasonable amount of time in which to lócate an operation such as ours. K you have any information about houses for rent around Ann Arbor big enough for our purposes (15-20 rooms), please cali us at 761-1709 and speak to Dave. Or ií anyone supportive oí our goals and programs has the economie power and the desire to help us finance the purchase of a permanent home (ROOTS), we'd really dig to talk it over with you, too. The department of Health, Education, and Welfare has approved the community coalition grant for drug work in Ann Arbor to the tune of $125, 000. The grant application consisted of sections covering Drug Help, the Office of Student Services (U of M), a Black community proposal, a drug course, and the Ann Arbor Tribal Council. The Tribal Council section included muney to get a community center gig together and to help expand the free people's clinic, as well as support the other efforts of the Hard Drugs committee. The final budgets for the different sections have not been decided upon, but the representatives that make up the coalition will be meeting to finalize the plans. Funding will start on July lst.