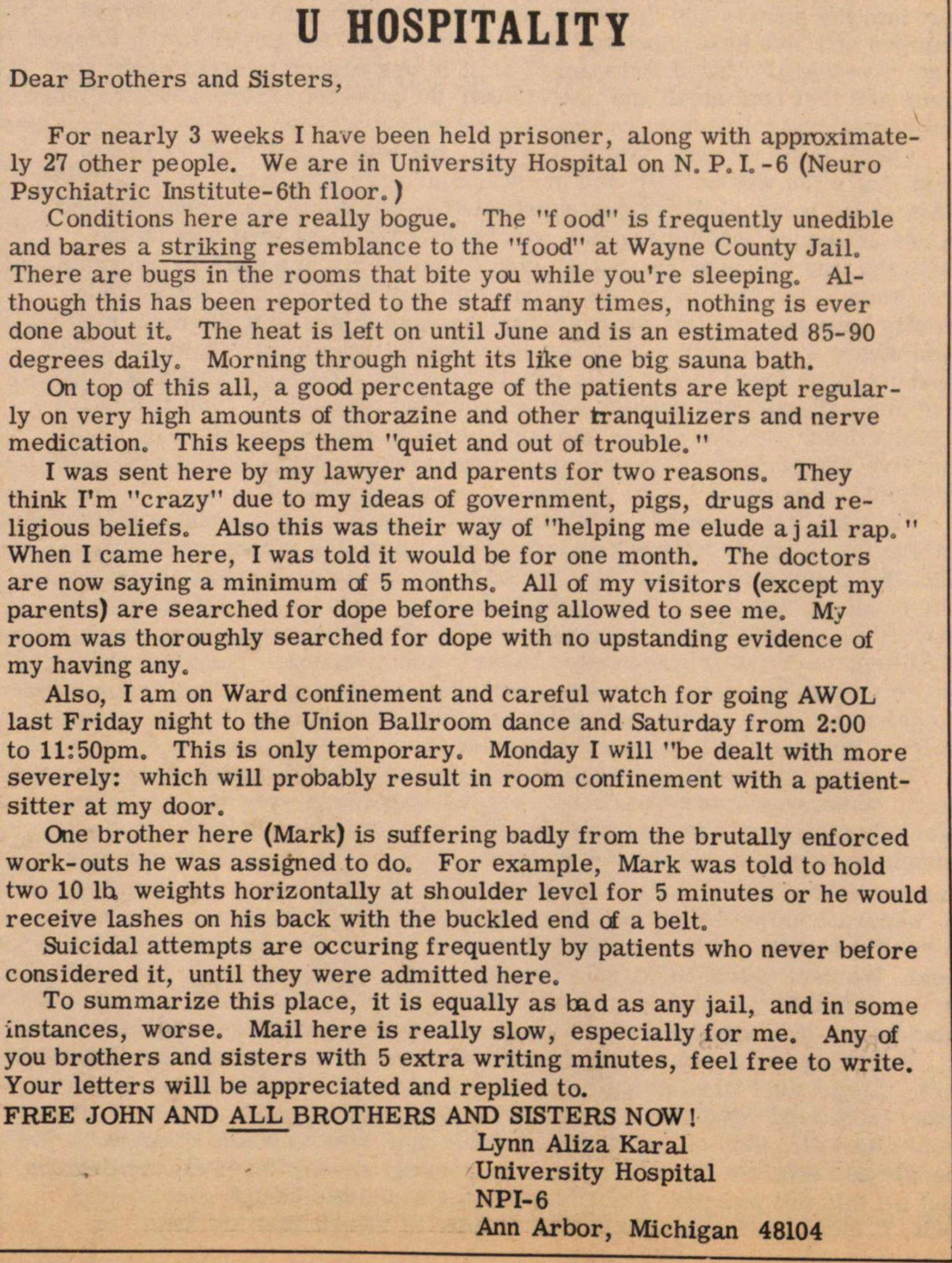 Dear Brothers and Sisters, For nearly 3 weeks I have been held prisoner, along with approximately 27 other people. We are in University Hospital on N. P. I. -6 (Neuro Psychiatrie Institute-6th f loor. ) Conditions her e are really bogue. The "f ood" is írequently unedible and bares a striking resemblance to the "food" at Wayne County Jail. There are bugs in the rooms that bite you while you're sleeping. Although this has been reported to the staff many times, nothing is ever done about it„ The heat is left on until June and is an estimated 85-90 degrees daily. Morning through night its like one big sauna bath. On top oí this all, a good percentage of the patients are kept regularly on very high amounts of thorazine and other tranquilizers and nerve medication. This keeps them "quiet and out of trouble. " I was sent here by my lawyer and parents for two reasons. They think I'm "crazy" due to my ideas of government, pigs, drugs and religious belief s. Also this was their way of "helping me elude a jail rap. " When I carne here, I was told it would be for one month. The doctors are now saying a minimum af 5 months. All of my visitors (except my parents) are searched for dope bef ore being allowed to see me. My room was thoroughly searched for dope with no upstanding evidence of my having any. Also, I am on Ward conf inement and careful watch for going AWOL last Friday night to the Union Ballroom dance and Saturday from 2:00 to ll:50pm. This is only temporary. Monday I will "be dealt with more severely: which will probably result in room confinement with a patientsitter at my door. One brother here (Mark) is suffering badly from the brutally enforced work-outs he was assigned to do. For example, Mark was told to hold two 10 lb. weights horizontally at shoulder level for 5 minutes or he would receive lashes on his back with the buckled end of a belt. Suicidal attempts are occuring frequently by patients who never before considered it, until they were admitted here. To summarize this place, it is equally as bad as any jail, and in sorae instances, worse. Mail here is really slow, especially for me. Any of you brothers and sisters with 5 extra writing minutes, feel free to write. Your letters will be appreciated and replied to. FREE JOHN AND ALL BROTHERS AND SISTERS NOW! University Hospital NPI-6 Ann Arbor, Michigan 48104