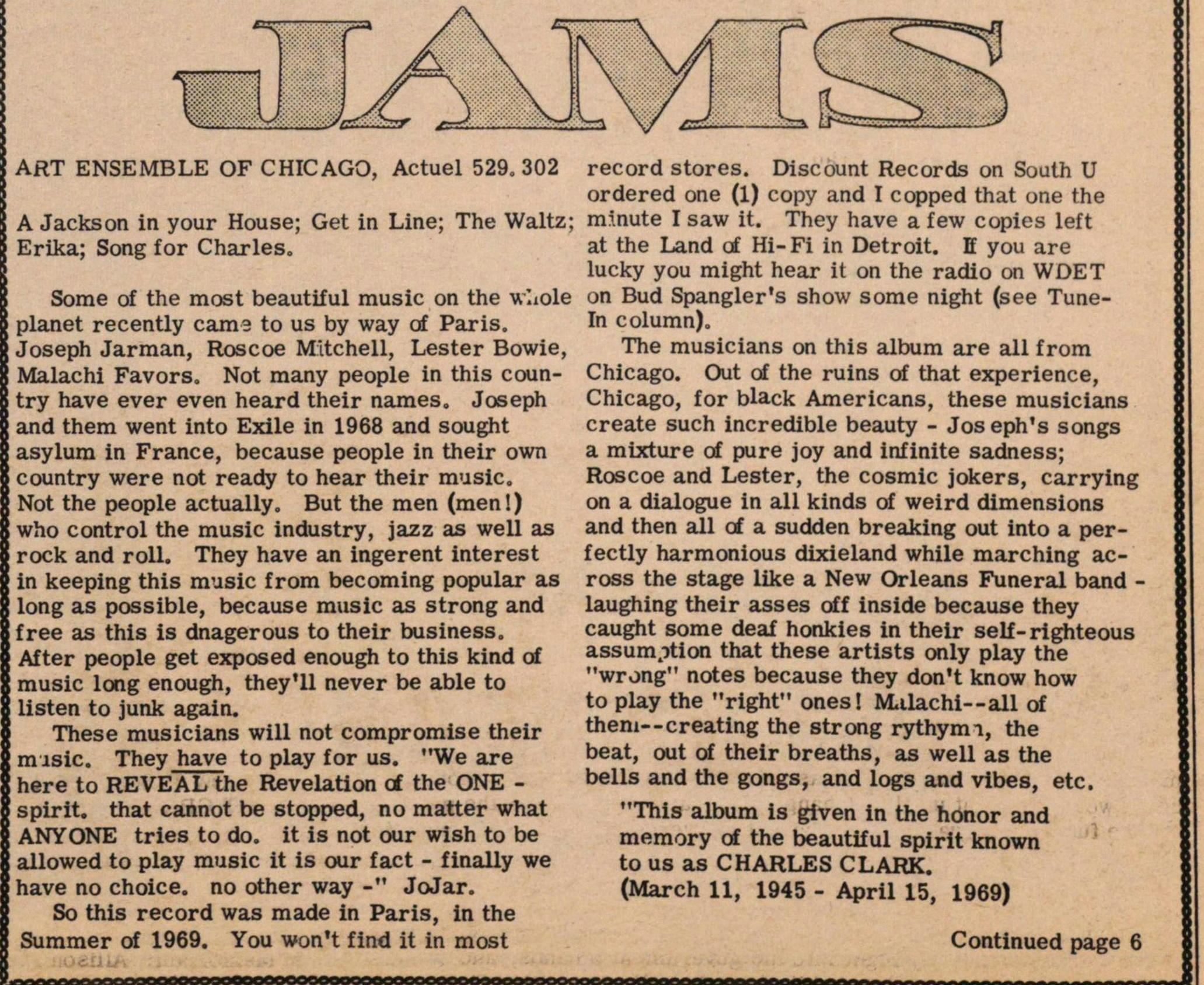 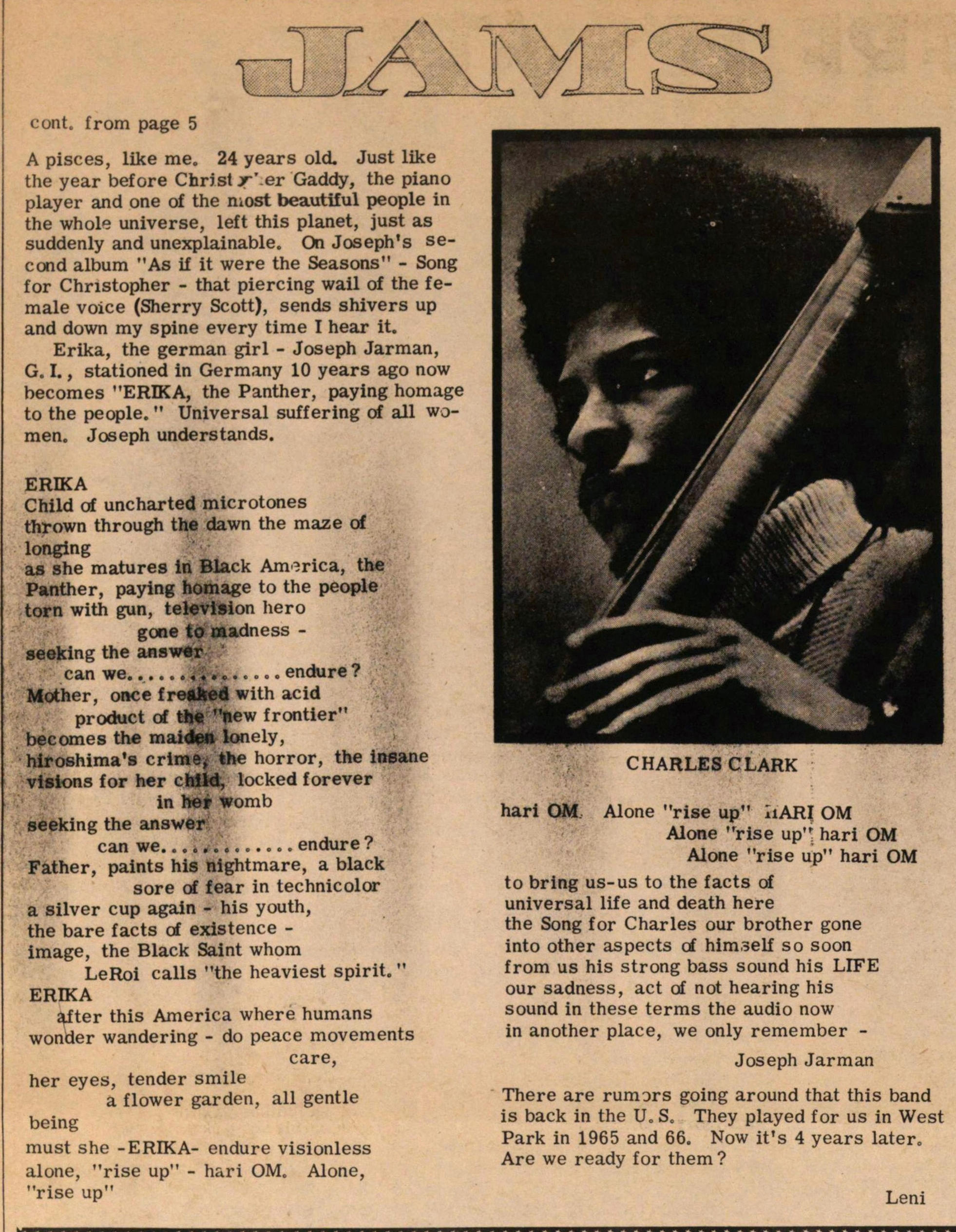 ART ENSEMBLE OF CHICAGO, Actuel 529. 302 A Jacks on in your House; Get in Line; The Waltz; Erika; Song for Charles. Some of the most beautiful music on the w'.iole planet recently cams to us by way af Paris. Joseph Jarman, Roscoe MItchell, Lester Bowie, Malachi Favors. Not many people in this country have ever even heard their names. Joseph and them went into Exile in 1968 and sought asylum in France, because people in their own country were not ready to hear their music. Not the people actually „ But the men (men 1 ) who control the music industry, jazz as well as rock and roll. They have an ingerent interest in keeping this music f rom becoming popular as long as possible, because music as strong and free as this is dnagerous to their business. After people get exposed enough to this kind of music long enough, they'll never be able to listen to junk again. These musicians will not compromise their misic. They have to play for us. "We are here to REVEAL the Revelation of the ONE - spirit, that cannot be stopped, no matter what ANYONE tries to do. it is not our wish to be allowed to play music it is our fact - finally we have no choice. no other way -" JoJar. So this record was made in Paris, in the Suramer of 1969. You won't find it in most record stores. Discount Records on South U ordered one (1) copy and I copped that one the minute I saw it. They have a few copies left at the Land of Hi-Fi in Detroit, ff you are lucky you might hear it on the radio on WDET on Bud Spangler's show some night (see TuneIn column). The musicians on this album are all f rom Chicago. Out of the ruins of that experience, Chicago, for black Americans, these musicians créate such incredible beauty - Joseph's songs a mixture of pure joy and infinite sadness; Roscoe and Lester, the cosmic jokers, carrying on a dialogue in all kinds of weird dimensions and then all of a sudden breaking out into a perfectly harmonious dixieland while marching across the stage like a New Orleans Funeral band - laughing their asses off inside because they caught some deaf honkies in their self - righteous assumption that these artists only play the "wrong" notes because they don't know how to play the "right" ones! M.ilachi- all of them- creating the strong rythymi, the beat, out of their breaths, as we 11 as the bells and the gongs, and logs and vibes, etc. "This album is given in the honor and memory of the beautiful spirit known to us as CHARLES CLARK. (March 11, 1945 - April 15, 1969) Continued page 6 dlÍIS cunt. f rom page 5 A pisces, like me. 24 years oíd. Just like the year bef ore Christ jr'.er Gaddy, the piano player and one of the most beautiful people in the whole universe, left this planet, just as suddenly and unexplainable. On Joseph's second album "As ií it were the Seasons" - Song for Christopher - that piercing wail of the female voice (Sherry Scott), sends shivers up and down my spine every time I hear it. Erika, the german girl - Joseph Jarman, G. I. , stationed in Germany 10 years ago now becomes "ERIKA, the Panther, paying homage to the people. " Universal suffering of all women. Joseph understands. ERKA Child oí uncharted microtones thrown through the dawn the maze oí longing as she matures in Black América, the Panther, paying homage to the people torn with gun, televisión hero gone to adness - seeking the answr can we. endure ? Mother, once fredi4 with acid product of Uw "liew frontier" becomes the maide lonely, hiroshima's crime the horror, the ineane visions for her chiles locked forever in het womb seeking the answer can we. endure ? Father, paints his nightmare, a black sore of fear in technicolor a silver cup again - his youth, the bare facts of existence - image, the Black Saint whom LeRoi calis "the heaviest spirit. " ERIKA after this America where humans wonder wandering - do peace movements care, her eyes, tender smile a flower garden, all gentle being must she endure visionless alone, "rise up" - hari OM. Alone, "rise up" hari OM, Alone "rise up" IiARÏ OM Alone "rise up" hari OM Alone "rise up" hari OM to bring us-us to the f acts of universal life and death here the Song for Charles our brother gone into other aspects oí himself so soon from us his strong bass sound his LIFE our sadness, act of not hearing his sound in these terms the audio now in another place, we only remember - Joseph Jarman There are rumors going around that this band is back in the U„ S. They played for us in West Park in 1965 and 66. Now it's 4 years later. Are we ready for them ?