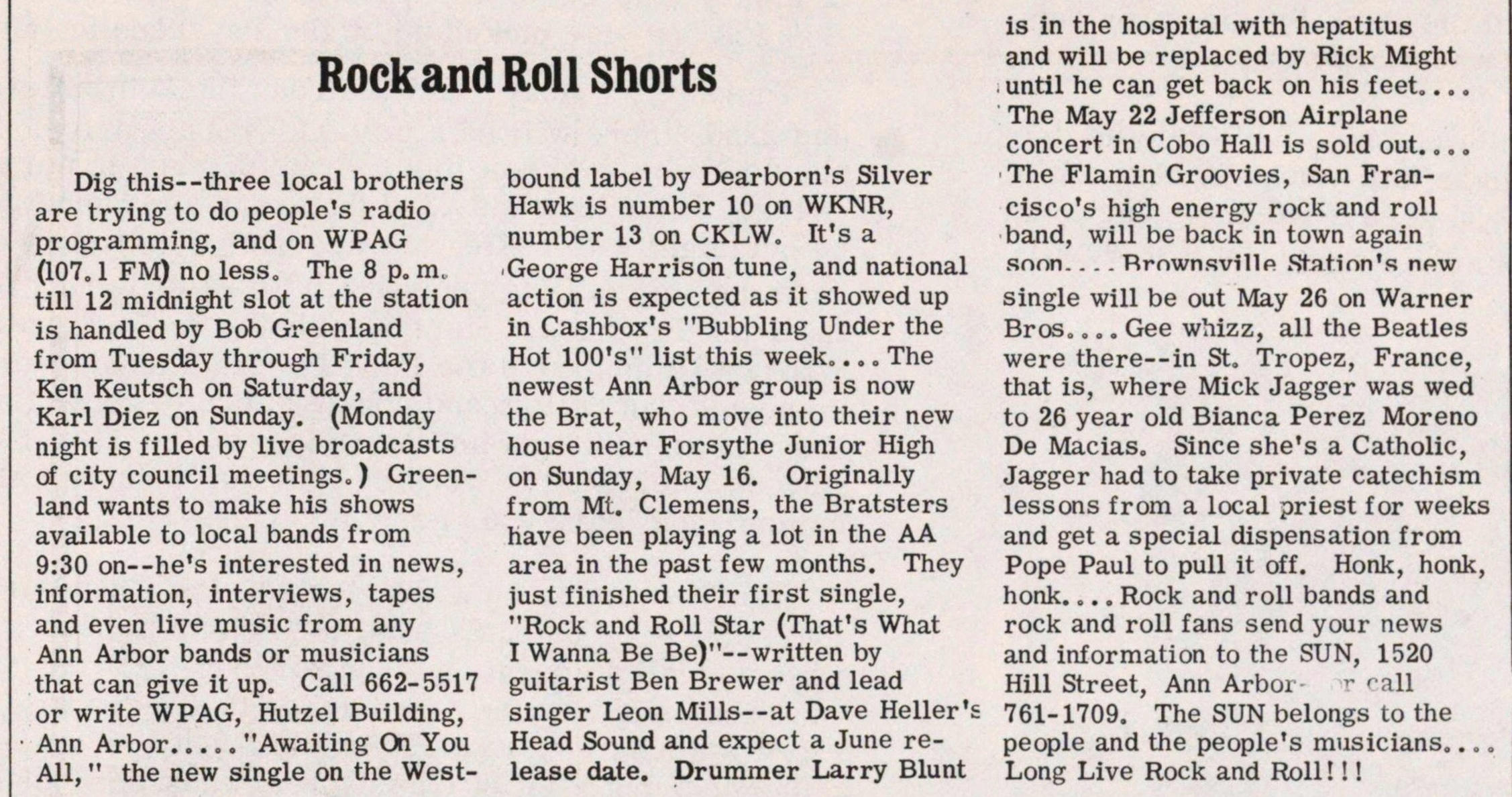 Dig this -- three local brothers are trying to do people's radio programming, and on WPAG (107. 1 FM) no less. The 8 p.m. till 12 midnight slot at the station is handled by Bob Greenland from Tuesday through Friday, Ken Keutsch on Saturday, and Karl Diez on Sunday. (Monday night is filled by live broadcasts of city council meetings.) Greenland wants to make his shows available to local bands from 9:30 on -- he's interested in news, information, interviews, tapes and even live music from any Ann Arbor bands or musicians that can give it up. Call 662-5517 or write WPAG, Hutzel Building, Ann Arbor..... "Awaiting On You All," the new single on the Westbound label by Dearborn's Silver Hawk is number 10 on WKNR, number 13 on CKLW. It's a George Harrison tune, and national action is expected as it showed up in Cashbox's "Bubbling Under the Hot 100's" list this week. . . . The newest Ann Arbor group is now the Brat, who move into their new house near Forsythe Junior High on Sunday, May 16. Originally from Mt. Clemens, the Bratsters have been playing a lot in the AA area in the past few months. They just finished their first single, "Rock and Roll Star (That's What I Wanna Be Be)" -- written by guitarist Ben Brewer and lead singer Leon Mills -- at Dave Heller's Head Sound and expect a June release date. Drummer Larry Blunt is in the hospital with hepatitus and will be replaced by Rick Might until he can get back on his feet. . . . The May 22 Jefferson Airplane concert in Cobo Hall is sold out. . . . The Flamin Groovies, San Francisco's high energy rock and roll band, will be back in town again soon.. . . Brownsville Station's new single will be out May 26 on Warner Bros. . . . Gee whizz, all the Beatles were there -- in St. Tropez, France, that is, where Mick Jagger was wed to 26 year old Bianca Pérez Moreno De Macias. Since she's a Catholic, Jagger had to take private catechism lessons from a local priest for weeks and get a special dispensation from Pope Paul to pull it off. Honk, honk, honk. . . . Rock and roll bands and rock and roll fans send your news and information to the SUN, 1520 Hill Street, Ann Arbor- or call 761-1709. The SUN belongs to the people and the people's musicians. . . . Long Live Rock and Roll ! ! !