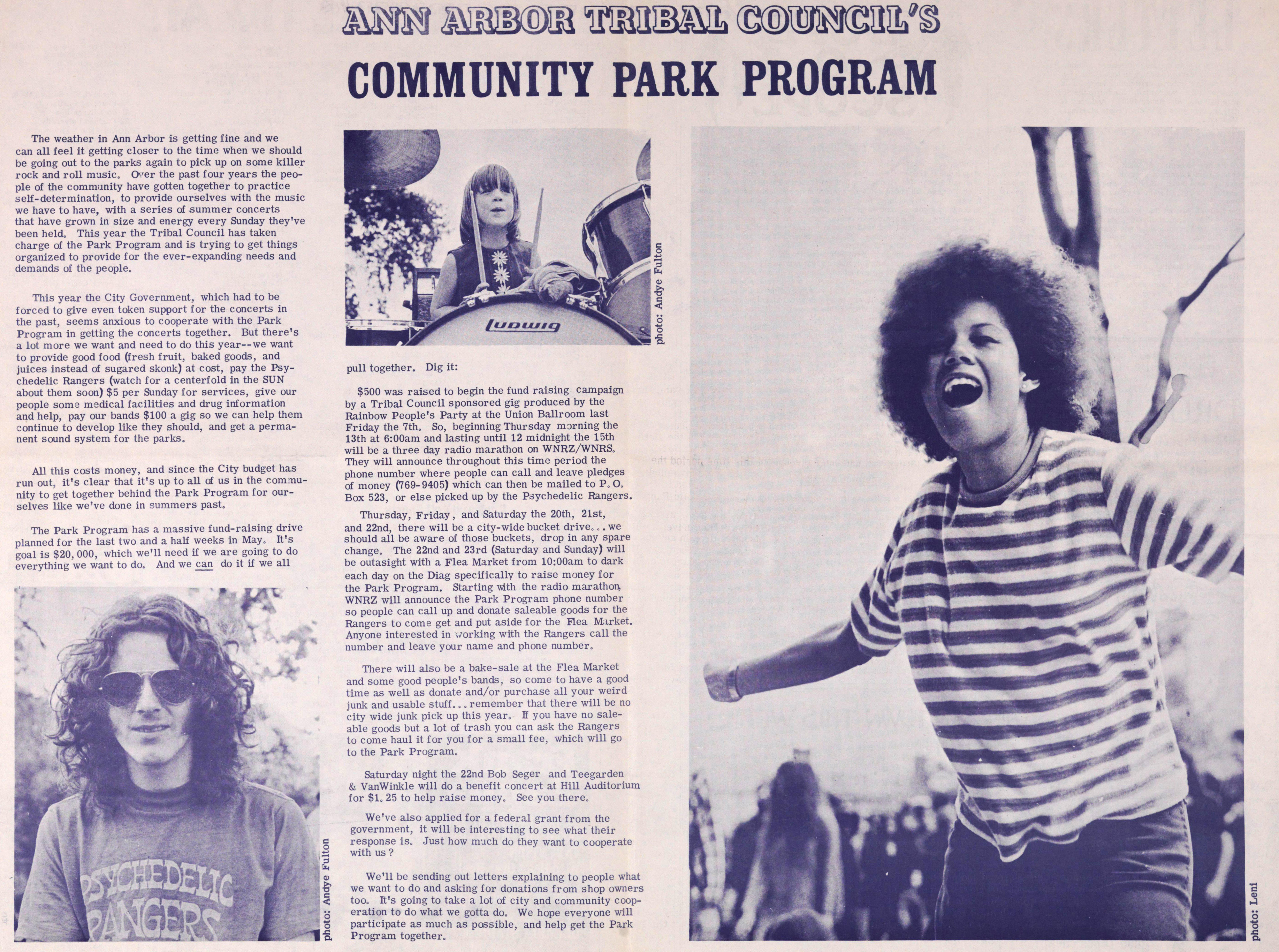 The weather in Ann Arbor is getting fine and we can all feel it getting closer to the time when we should be going out to the parks again to piek up on some killer rock and roll music Oer the past f our years the people of the community have gotten together to practice self-determination, to provide ourselves with the music we have to have, with a series of summer concerts that have grown in size and energy every Sunday they've been heldc This year the Tribal Council has taken charge of the Park Program and is trying to get things organized to provide for the ever-expanding needs and demands of the people. This year the City Government, which had to be forced to give even token support for the concerts in the past, seems anxious to cooperate with the Park Program in getting the concerts together. But there's a lot more we want and need to do this year-we want to provide good food (fresh fruit, baked goods, and juices instead of sugared skonk) at cost, pay the Psychedelic Rangers (watch for a centerfold in the SUN about them soon) $5 per Sunday for services, give our people some medical facilities and drug information and help, pay our bands $100 a gig so we can help them continue to develop like they should, and get a permanent sound system for the parks. All this costs money, and since the City budget has run out, it's clear that it's up to all af us in the community to get together behind the Park Program for ourselves like we've done in summers past. The Park Program has a massive fund-raising drive planned for the last two and a half weeks in May. It's goal is $20, 000, which we'll need if we are going to do everything we want to do. And we can do it if we all pull together. Dig it: $500 was raised to begin the fund raising campaign by a Tribal Council sponsored gig produced by the Rainbow People's Party at the Union Ballroom last Friday the 7th. So, beginning Thursday morning the 13th at 6:00am and lasting until 12 midnight the 15th will be a three day radio marathon on WNRZWNRS. They will announce throughout this time period the phone number where people can cali and leave pledges of money (769-9405) which can then be mailed to P„ O. Box 523, or else picked up by the Psychedelic Rangers. Thursday, Friday , and Saturday the 20th, 21st, and 22nd, there will be a city-wide bucket drive . we should all be aware of those buckets, drop in any spare change. The 22nd and 23rd (Saturday and Sunday) will be outasight with a Flea Market from 10:00am to dark each day on the Diag specifically to raise money f or the Park Program. Starting with the radio marathon, WNRZ will announce the Park Program phone number so people can cali up and dónate saleable goods for the Rangers to come get and put aside for the Rea Market. Anyone interested in working with the Rangers cali the number and leave your name and phone number. There will also be a bake-sale at the Flea Market and some good people's bands, so come to have a good time as well as dónate andor purchase all your weird junk and usable stuff . . remember that there will be no city wide junk piek up this year„ E you have no saleable goods but a lot of trash you can ask the Rangers to come haul it for you for a small fee, which will go to the Park Program Saturday night the 22nd Bob Seger and Teegarden & VanWinkle will do a benefit concert at Hill Auditorium for $1 25 to help raise money. See you there. WeVe also applied for a federal grant from the government, it will be interesting to see what their response is„ Just how much do they want to cooperate with us ? We'll be sending out letters explaining to people what we want to do and asking for donations from shop owners too. It's going to take a lot of city and community cooperation to do what we gotta do. We hope everyone will particípate as much as possible, and help get the Park Program together.