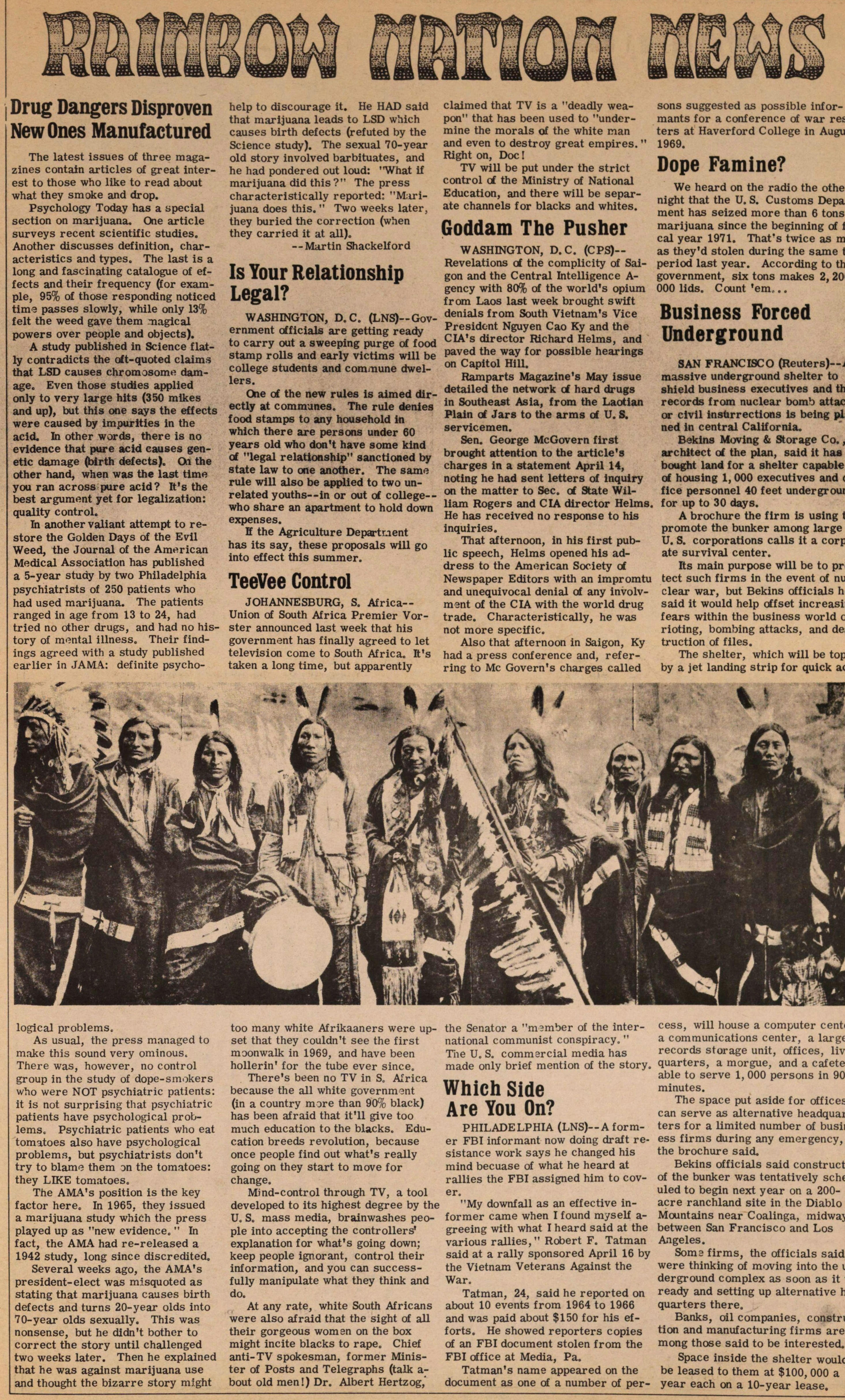 The latest issues of three magazines contain articles of great interest to those who like to read about what they smoke and drop.

Psychology Today has a special section on marijuana. One article surveys recent scientific studies. Another discusses definition, characteristics and types. The last is a long and fascinating catalogue of effects and their frequency (for example, 95% of those responding noticed time passes slowly, while only 13% felt the weed gave them magical powers over people and objects).

A study published in Science flatly contradicts the oft-quoted claims that LSD causes chromosome damage. Even those studies applied only to very large hits (350 mikes and up), but this one says the effects were caused by impurities in the acid. In other words, there is no evidence that pure acid causes genetic damage (birth defects). On the other hand, when was the last time you ran across pure acid? It's the best argument yet for legalization: quality control.

In another valiant attempt to restore the Golden Days of the Evil Weed, the Journal of the American Medical Association has published a 5-year study by two Philadelphia psychiatrists of 250 patients who had used marijuana. The patients ranged in age from 13 to 24, had tried no other drugs, and had no history of mental illness. Their findings agreed with a study published earlier in JAMA: definite psychological problems.

The AMA's position is the key factor here. In 1965, they issued a marijuana study which the press played up as "new evidence." In fact, the AMA had re-released a 1942 study, long since discredited.

Several weeks ago, the AMA's president-elect was misquoted as stating that marijuana causes birth defects and turns 20-year olds into 70-year olds sexually. This was nonsense, but he didn't bother to correct the story until challenged two weeks later. Then he explained that he was against marijuana use and thought the bizarre story might help to discourage it. He HAD said that marijuana leads to LSD which causes birth defects (refuted by the Science study). The sexual 70-year old story involved barbituates, and he had pondered out loud: "What if marijuana did this?" The press characteristically reported: "Marijuana does this." Two weeks later, they buried the correction (when they carried it at all).

Is Your Relationship Legal?

WASHINGTON, D.C. (LNS)-- Government officials are getting ready to carry out a sweeping purge of food stamp rolls and early victims will be college students and commune dwellers.

One of the new rules is aimed directly at communes. The rule denies food stamps to any household in which there are persons under 60 years old who don't have some kind of "legal relationship" sanctioned by state law to one another. The same rule will also be applied to two unrelated youths--in or out of college--who share an apartment to hold down expenses.

If the Agricultural Department has its say, these proposals will go into effect this summer.

JOHANNESBURG, S. Africa-- Union of South Africa Premier Vorster announced last week that his government has finally agreed to let television come to South Africa. It's taken a long time, but apparently too many white Afrikaaners were upset that they couldn't see the first moonwalk in 1969, and have been hollerin' for the tube ever since.

There's been no TV in S. Africa because the all white government (in a country more than 90% black) has been afraid that it'll give too much education to the blacks. Education breeds revolution, because once people find out what's really going on they start to move for change.

Mind-control through TV, a tool developed to its highest degree by the U.S. mass media, brainwashes people into accepting the controllers' explanation for what's going down; keep people ignorant, control their information, and you can successfully manipulate what they think and do.

At any rate, white South Africans were also afraid that the sight of all their gorgeous women on the box might incite blacks to rape. Chief anti-TV spokesman, former Minister of Posts and Telegraphs (talk about old men!) Dr. Albert Hertzog, claimed that TV is a "deadly weapon" that has been used to "undermine the morals of the white man and even to destroy great empires." Right on, Doc!

TV will be put under the strict control of the Ministry of National Education, and there will be separate channels for blacks and whites.

WASHINGTON, D.C. (CPS)-- Revelations of the complicity of Saigon and the Central Intelligence Agency with 80% of the world's opium from Laos last week brought swift denials from South Vietnam's Vice President Nguyen Cao Ky and the CIA's director Richard Helms, and paved the way for possible hearings on Capital Hill.

Ramparts Magazine's May issue detailed the network of hard drugs in Southeast Asia, from the Laotian Plain of Jars to the arms of U.S. servicemen.

Sen. George McGovern first brought attention to the article's charges in a statement April 14, noting he had sent letters of inquiry on the matter to Sec. of State William Rogers and CIA director Helms. He has received no response to his inquiries.

That afternoon, in his first public speech, Helms opened his address to the American Society of Newspaper Editors with an impromtu and unequivocal denial of any involvment of the CIA with the world drug trade. Characteristically, he was not more specific.

Also that afternoon in Saigon, Ky had a press conference and, referring to Mc Govern's charges called the Senator a "member of the international communist conspiracy." The U.S. commercial media has made only brief mention of the story.

Which Side Are You On?

PHILADELPHIA (LNS)-- A former FBI informant now doing draft resistance work says he changed his mind becuase of what he heard at rallies the FBI assigned him to cover.

"My downfall as an effective informer came when I found myself agreeing with what I heard said at the various rallies," Robert F. Tatman said at a rally sponsored April 16 by the Vietnam Veterans Against the War.

Tatman, 24, said he reported on about 10 events from 1964 to 1966 and was paid about $150 for his efforts. He showed reporters copies of an FBI document stolen from the FBI office at Media, Pa.

Tatman's name appeared on the document as one of a number of persons suggested as possible informants for a conference of war resisters at Haverford College in August 1969.

We heard on the radio the other night that the U.S. Customs Department has seized more than 6 tons of marijuana since the beginning of fiscal year 1971. That's twice as much as they'd stolen during the same time period last year. According to the government, six tons makes 2,200,000 lids. Count em...

SAN FRANCISCO (Reuters)-- A massive underground shelter to shield business executives and their records from nuclear bomb attacks or civil insurrections is being planned in central California.

Bekins Moving & Storage Co., architect of the plan, said it has bought land for a shelter capable of housing 1,000 executives and office personnel 40 feet underground for up to 30 days.

A brochure the firm is using to promote the bunker among large U.S. corporations calls it a corporate survival shelter.

Its main purpose will be to protect such firms in the event of nuclear war, but Bekins officials have said it would help offset increasing fears within the business world of rioting, bombing attacks, and destruction of files.

The shelter, which will be topped by a jet landing strip for quick access, will house a computer center, a communications center, a large records storage unit, offices, living quarters, a morgue, and a cafeteria able to serve 1,000 persons in 90 minutes.

The space but aside for offices can serve as alternative headquarters for a limited number of business firms during any emergency, the brochure said.

Belkins officials said construction of the bunker was tentatively scheduled to begin next year on a 200-acre ranchland site in the Diablo Mountains near Calinga, midway between San Francisco and Los Angeles.

Some firms, the officials said, were thinking of moving into the underground complex as soon as it is ready and setting up alternative headquarters there.

Banks, oil companies, construction and manufacturing firms are among those said to be interested.