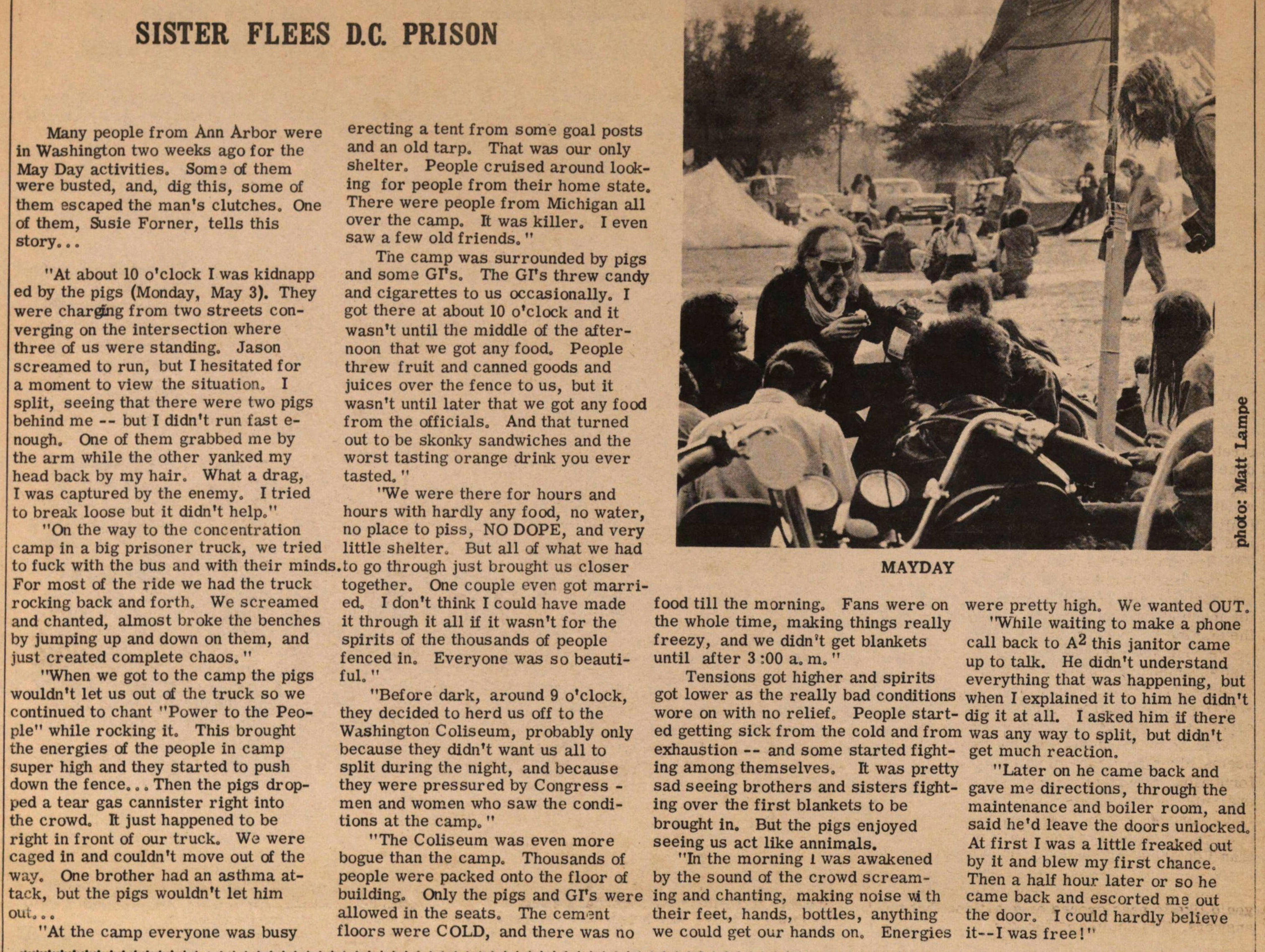 Many people from Ann Arbor were in Washington two weeks ago for the May Day activities. Some of them were busted, and, dig this, some of them escaped the man's clutches. One of them, Susie Forner, tells this story. . . "At about 10 o'clock I was kidnapped by the pigs (Monday, May 3). They were charging from two streets converging on the intersection where three of us were standing. Jason screamed to run, but I hesitated f or a moment to view the situation. I split, seeing that there were two pigs behind me - but I didn't run fast enough. One of them grabbed me by the arm while the other yanked my head back by my hair. What a drag, I was captured by the enemy. I tried to break loose but it didn't help„" "On the way to the concentration camp in a big prisoner truck, we tried to fuck with the bus and with their minds, For most of the ride we had the truck rocking back and forth. We screamed and chanted, almost broke the benches by jumping up and down on them, and just created complete chaos. " "When we got to the camp the pigs wouldn't let us out of the truck so we continued to chant "Power to the People" while rocking it. This brought the energies of the people in camp super high and they started to push down the fence. . . Then the pigs dropped a tear gas cannister right into the crowd. R just happened to be right in front of our truck. We were caged in and couldn't move out of the way. One brother had an asthma attack, but the pigs wouldn't let him out. . . "At the camp everyone was busy erecting a tent from some goal posts and an old tarp. That was our only shelter. People cruised around looking for people from their home state. There were people from Michigan all over the camp. It was killer. I even saw a few old friends. " The camp was surrounded by pigs and some GIs. The GIs threw candy and cigarettes to us occasionally. I got there at about 10 o'clock and it wasn't until the middle of the afternoon that we got any food. People threw fruit and canned goods and juices over the fence to us, but it wasn't until later that we got any food from the officials. And that turned out to be skonky sandwiches and the worst tasting orange drink you ever tasted. " "We were there for hours and hours with hardly any food, no water, no place to piss, NO DOPE, and very little shelter. But all of what we had .to go through just brought us closer together. One couple even got married. I don't think I could have made it through it all if it wasn't for the spirits of the thousands of people : fenced in. Everyone was so beautiful. " "Before dark, around 9 o'clock, they decided to herd us off to the Washington Coliseum, probably only because they didn't want us all to ' split during the night, and because : they were pressured by Congress - i men and women who saw the conditions at the camp. " "The Coliseum was even more bogue than the camp. Thousands of people were packed onto the floor of 1 building. Only the pigs and GIs were i allowed in the seats. The cement 1 floors were COLD, and there was no food till the morning. Fans were on the whole time, making things really freezy, and we didn't get blankets until after 3 :00 a. m. " Tensions got higher and spirits got lower as the really bad conditions wore on with no relief, People started getting sick from the cold and from exhaustion - and some started fighting among themselves. It was pretty sad seeing brothers and sisters fighting over the first blankets to be brought in. But the pigs enjoyed seeing us act like animals. "In the morning l was awakened by the sound of the crowd screaming and chanting, making noise with their feet, hands, bottles, anything we could get our hands on„ Energies were pretty high. We wanted OUT. "While waiting to make a phone call back to A2 this janitor came up to talk. He didn't understand everything that was happening, but when I explained it to him he didn't dig it at all. I asked him if there was any way to split, but didn't get much reaction. "Later on he came back and gave me directions, through the maintenance and boiler room, and said he'd leave the doors unlocked. i At first I was a little freaked out by it and blew my first chance. Then a half hour later or so he came back and escorted me out the door. I could hardly believe it - I was free!"