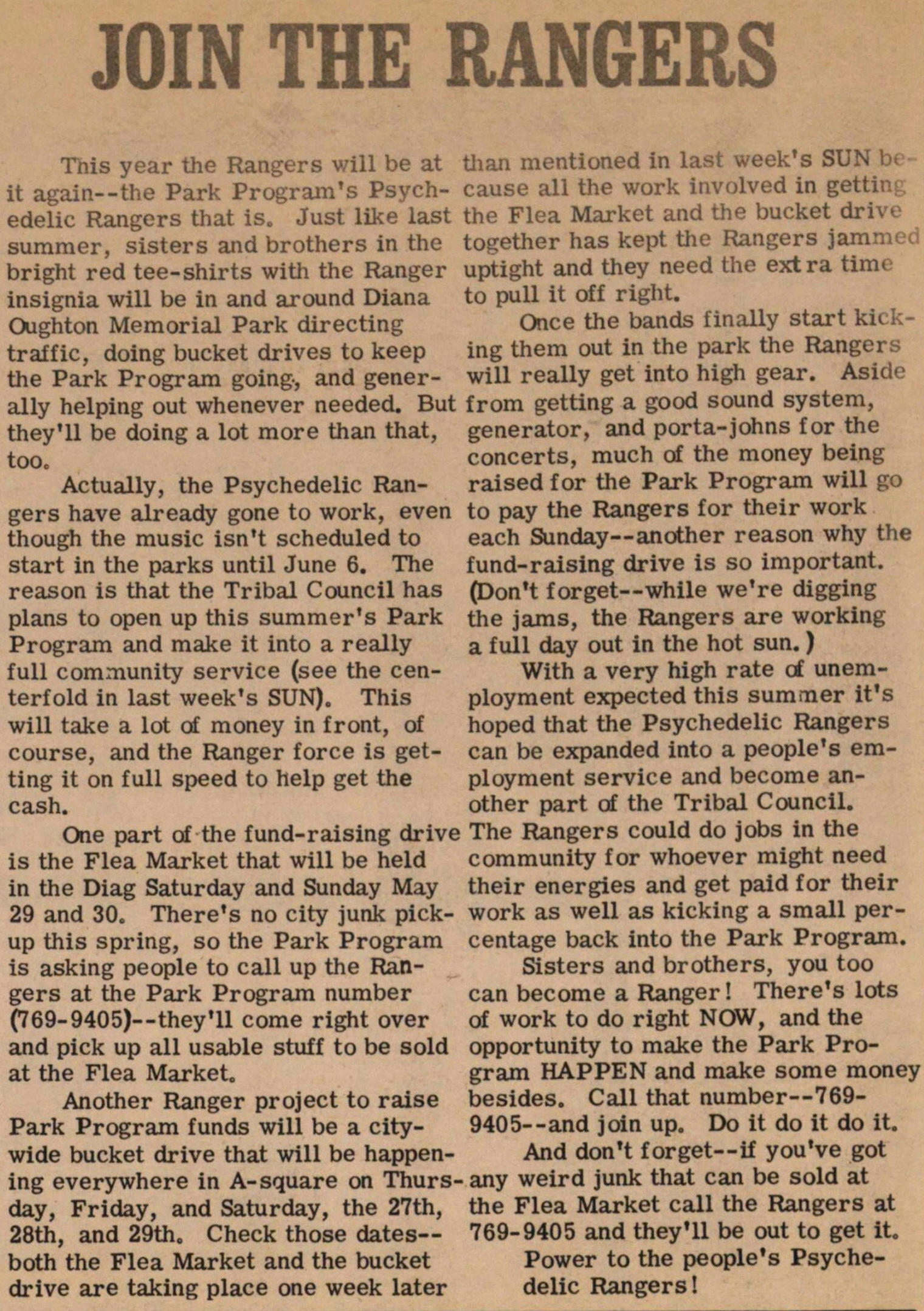 This year the Rangers will be at it again--the Park Program's Psychedelic Rangers that is. Just like last summer, sisters and brothers in the bright red tee-shirts with the Ranger insignia will be in and around Diana Oughton Memorial Park directing traffic, doing bucket drives to keep the Park Program going, and generally helping out whenever needed. But they'll be doing a lot more than that, too.

Actually, the Psychedelic Rangers have already gone to work, even though the music isn't scheduled to start in the parks until June 6. The reason is that the Tribal Council has plans to open up this summer's Park Program and make it into a really full community service (see the centerfold in last week's SUN). This will take a lot of money in front, of course, and the Ranger force is getting it on full speed to help get the cash.

One part of the fund-raising drive is the Flea Market that will be held in the Diag Saturday and Sunday May 29 and 30. There's no city junk pickup this spring, so the Park Program is asking people to call up the Rangers at the Park Program number (769-9405)--they'll come right over and pick up all usable stuff to be sold at the Flea Market.

Another Ranger project to raise Park Program funds will be a citywide bucket drive that will be happening everywhere in A-square on Thursday, Friday, and Saturday, the 27th, 28th, and 29th. Check those dates--both the Flea Market and the bucket drive are taking place one week later than mentioned in last week's SUN because all the work involved in getting the Flea Market and the bucket drive together has kept the Rangers jammed uptight and they need the extra time to pull it off right.

Once the bands finally start kicking them out in the park the Rangers will really get into high gear. Aside from getting a good sound system, generator, and porta-johns for the concerts, much of the money being raised for the Park Program will go to pay the Rangers for their work each Sunday--another reason why the fund-raising drive is so important. (Don't forget--while we're digging the jams, the Rangers are working a full day out in the hot sun.)

With a very high rate of unemployment expected this summer it's hoped that the Psychedelic Rangers can be expanded into a people's employment service and become another part of the Tribal Council. The Rangers could do jobs in the community for whoever might need their energies and get paid for their work as well as kicking a small percentage back into the Park Program.

Sisters and brothers, you too can become a Ranger ! There's lots of work to do right NOW, and the opportunity to make the Park Program HAPPEN and make some money besides. Call that number--769-9405--and join up. Do it do it do it.

And don't forget--if you've got any weird junk that can be sold at the Flea Market call the Rangers at 769-9405 and they'll be out to get it.

Power to the people's Psychedelic Rangers!