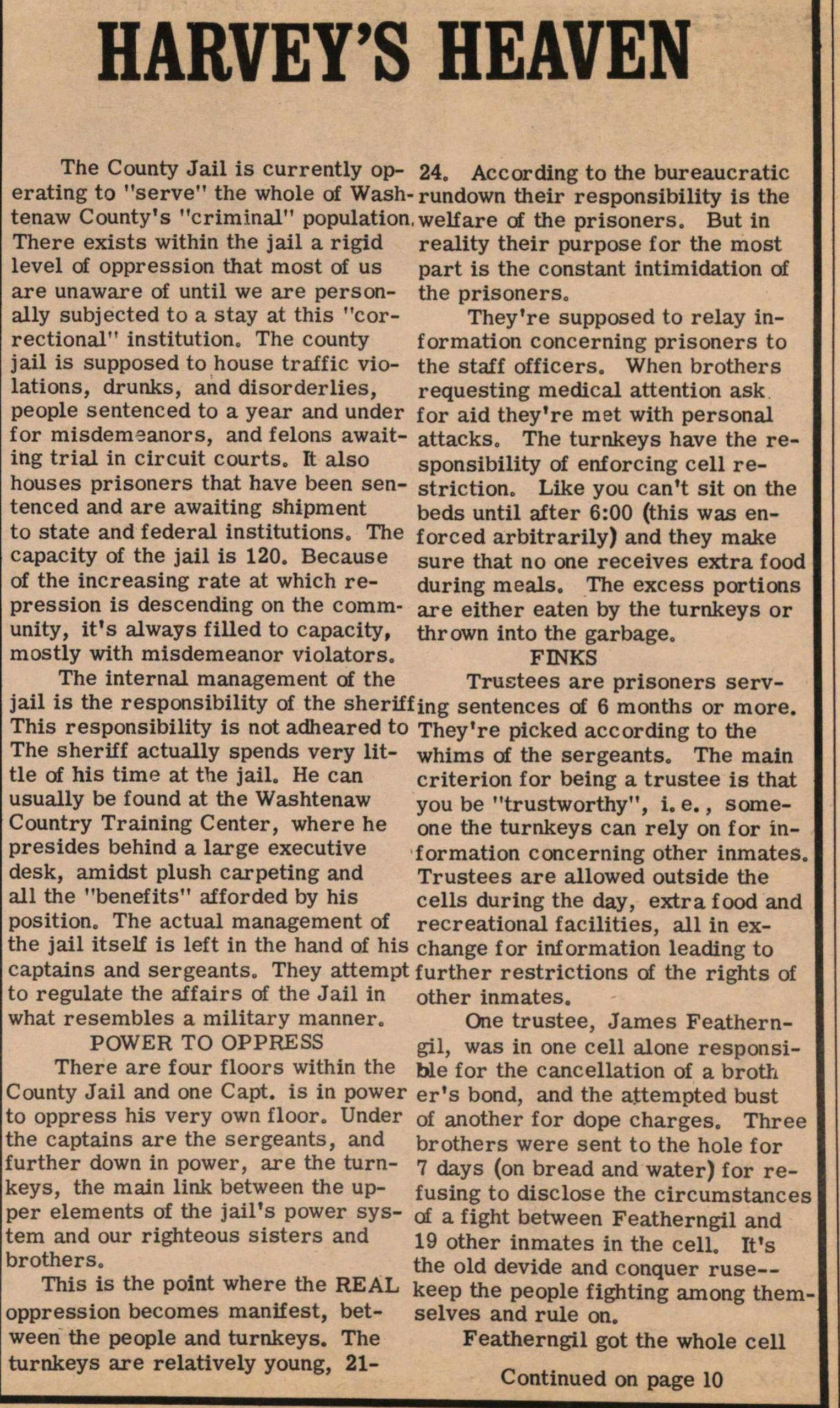 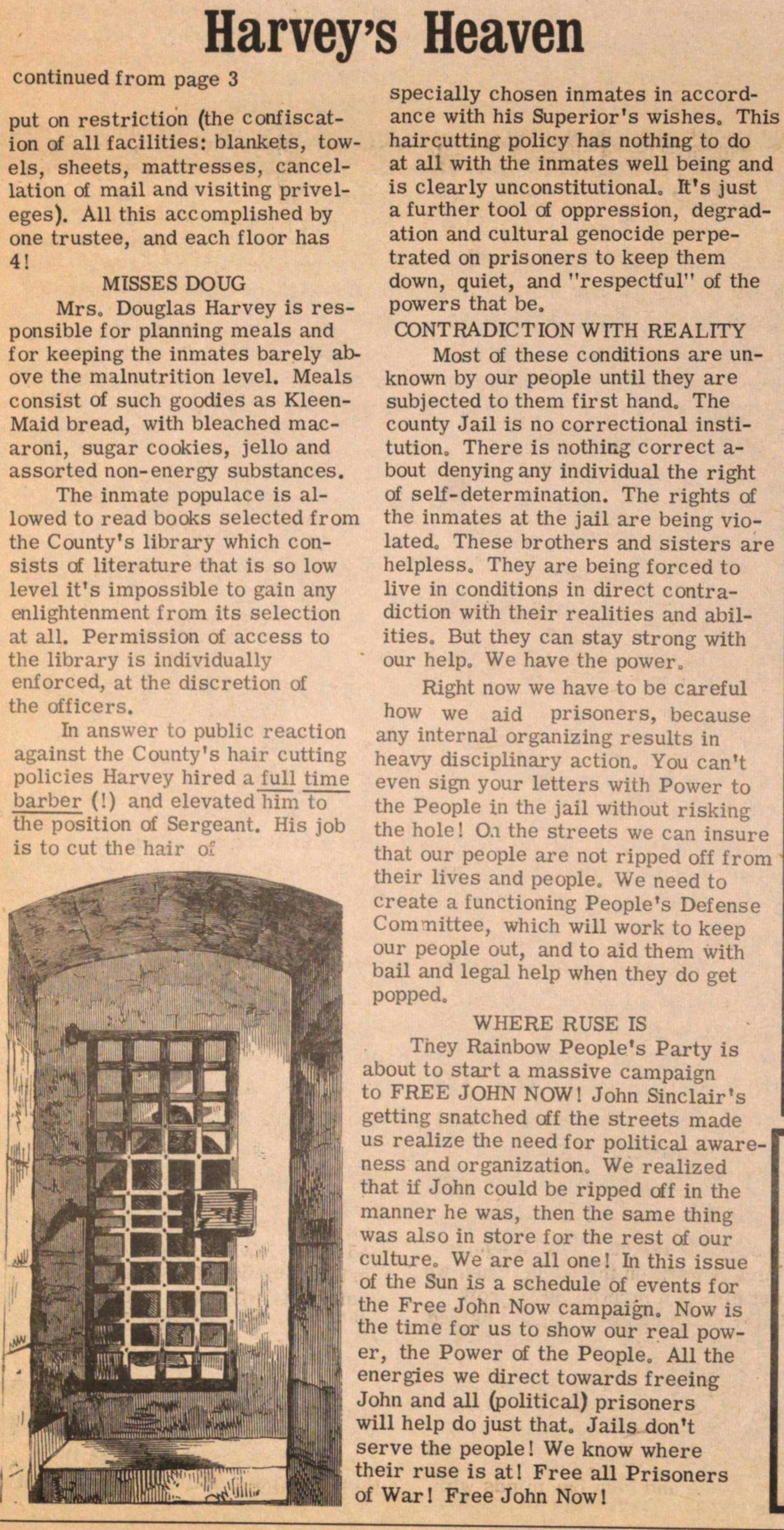 The County Jail is currently operating to "serve" the whole of Washtenaw County's "criminal" population. There exists within the jail a rigid level of oppression that most of us are unaware of until we are personally subjected to a stay at this "correctional" institution. The county jail is supposed to house traffic violations, drunks, and disorderlies, people sentenced to a year and under for misdemeanors, and felons awaiting trial in circuit courts. It also houses prisoners that have been sentenced and are awaiting shipment to state and federal institutions. The capacity of the jail is 120. Because of the increasing rate at which repression is descending on the community, it's always filled to capacity, mostly with misdemeanor violators.

The internal management of the jail is the responsibility of the sheriff, This responsibility is not adheared to. The sheriff actually spends very little of his time at the jail. He can usually be found at the Washtenaw Country Training Center, where he presides behind a large executive desk, amidst plush carpeting and all the "benefits" afforded by his position. The actual management of the jail itself is left in the hand of his captains and sergeants. They attempt to regulate the affairs of the Jail in what resembles a military manner.

There are four floors within the County Jail and one Capt. is in power to oppress his very own floor. Under the captains are the sergeants, and further down in power, are the turnkeys, the main link between the upper elements of the jail's power system and our righteous sisters and brothers.

This is the point where the REAL oppression becomes manifest, between the people and turnkeys. The turnkeys are relatively young, 21-24. According to the bureaucratic rundown their responsibility is the welfare of the prisoners. But in reality their purpose for the most part is the constant intimidation of the prisoners.

They're supposed to relay information concerning prisoners to the staff officers. When brothers requesting medical attention ask for aid they're met with personal attacks. The turnkeys have the responsibility of enforcing cell restriction. Like you can't sit on the beds until after 6:00 (this was enforced arbitrarily) and they make sure that no one receives extra food during meals. The excess portions are either eaten by the turnkeys or thrown into the garbage.

Trustees are prisoners serving sentences of 6 months or more. They're picked according to the whims of the sergeants. The main criterion for being a trustee is that you be "trustworthy", i.e., someone the turnkeys can rely on for information concerning other inmates. Trustees are allowed outside the cells during the day, extra food and recreational facilities, all in exchange for information leading to further restrictions of the rights of other inmates.

One trustee, James Featherngil, was in one cell alone responsible for the cancellation of a brother's bond, and the attempted bust of another for dope charges. Three brothers were sent to the hole for 7 days (on bread and water) for refusing to disclose the circumstances of a fight between Featherngil and 19 other inmates in the cell. It's the old divide and conquer ruse--keep the people fighting among themselves and rule on. Featherngil got the whole cell

put on restriction (the confiscation of all facilities: blankets, towels, sheets, mattresses, cancellation of mail and visiting privileges). All this accomplished by one trustee, and each floor has 4!

Mrs. Douglas Harvey is responsible for planning meals and for keeping the inmates barely above the malnutrition level. Meals consist of such goodies as Kleen-Maid bread, with bleached macaroni, sugar cookies, jello and assorted non-energy substances.

The inmate populace is allowed to read books selected from the County's library which consists of literature that is so low level it's impossible to gain any enlightenment from its selection at all. Permission of access to the library is individually enforced, at the discretion of the officers.

In answer to public reaction against the County's hair cutting policies Harvey hired a full time barber (!) and elevated him to the position of Sergeant. His job is to cut the hair of specially chosen inmates in accordance with his Superior's wishes. This haircutting policy has nothing to do at all with the inmates well being and is clearly unconstitutional. It's just a further tool of oppression, degradation and cultural genocide perpetrated on prisoners to keep them down, quiet, and "respectful" of the powers that be.

Most of these conditions are unknown by our people until they are subjected to them first hand. The county Jail is no correctional institution. There is nothing correct about denying any individual the right of self-determination. The rights of the inmates at the jail are being violated. These brothers and sisters are helpless. They are being forced to live in conditions in direct contradiction with their realities and abilities. But they can stay strong with our help. We have the power.

Right now we have to be careful how we aid prisoners, because any internal organizing results in heavy disciplinary action. You can't even sign your letters with Power to the People in the jail without risking the hole! On the streets we can insure that our people are not ripped off from their lives and people. We need to create a functioning People 's Defense Committee, which will work to keep our people out, and to aid them with bail and legal help when they do get popped.

The Rainbow People's Party is about to start a massive campaign to FREE JOHN NOW! John Sinclair's getting snatched off the streets made us realize the need for political awareness and organization. We realized that if John could be ripped off in the manner he was, then the same thing was also in store for the rest of our culture. We are all one! In this issue of the Sun is a schedule of events for the Free John Now campaign. Now is the time for us to show our real power, the Power of the People. All the energies we direct towards freeing John and all (political) prisoners will help do just that. Jails don't serve the people! We know where their ruse is at! Free all Prisoners of War! Free John Now!