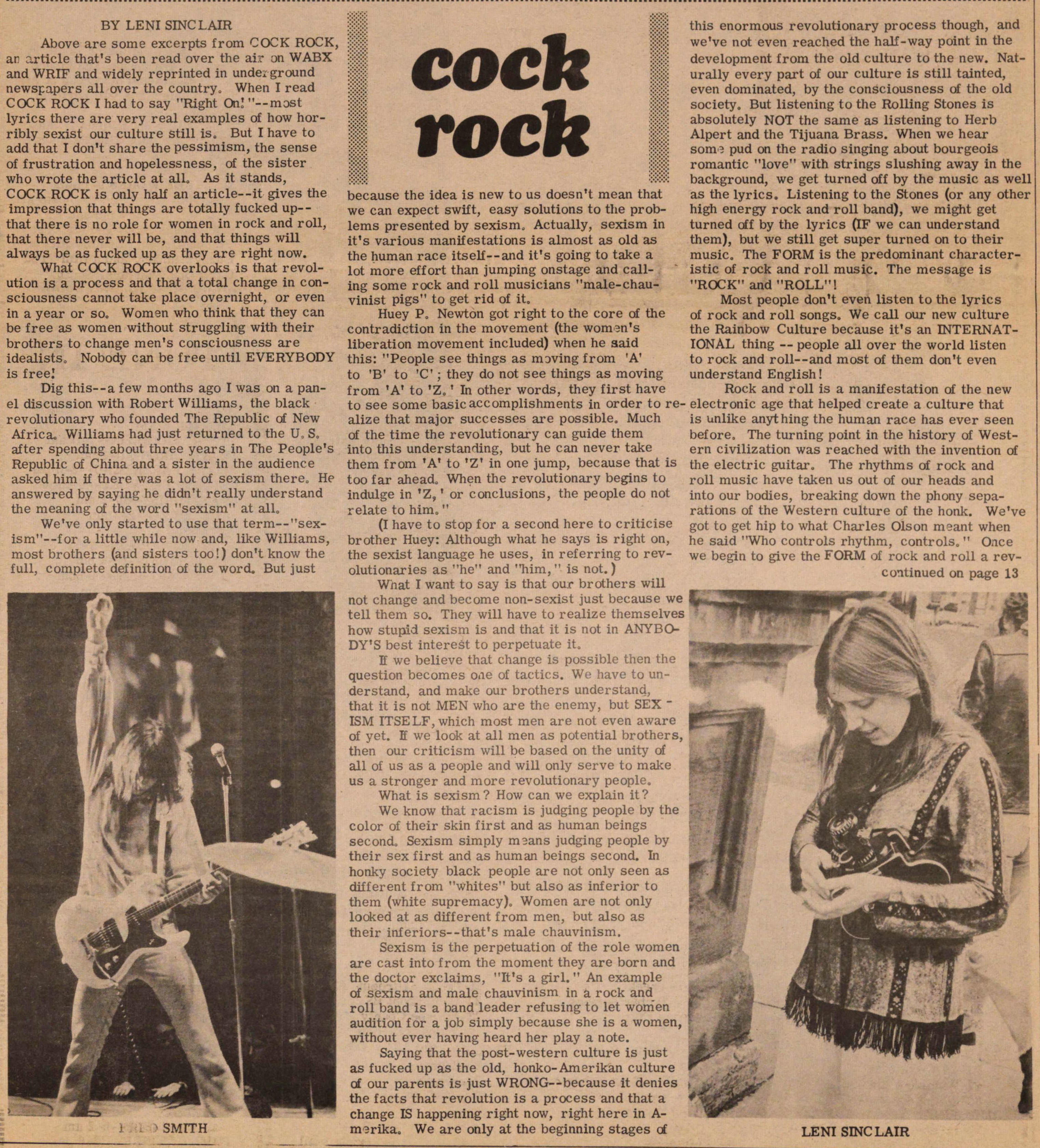 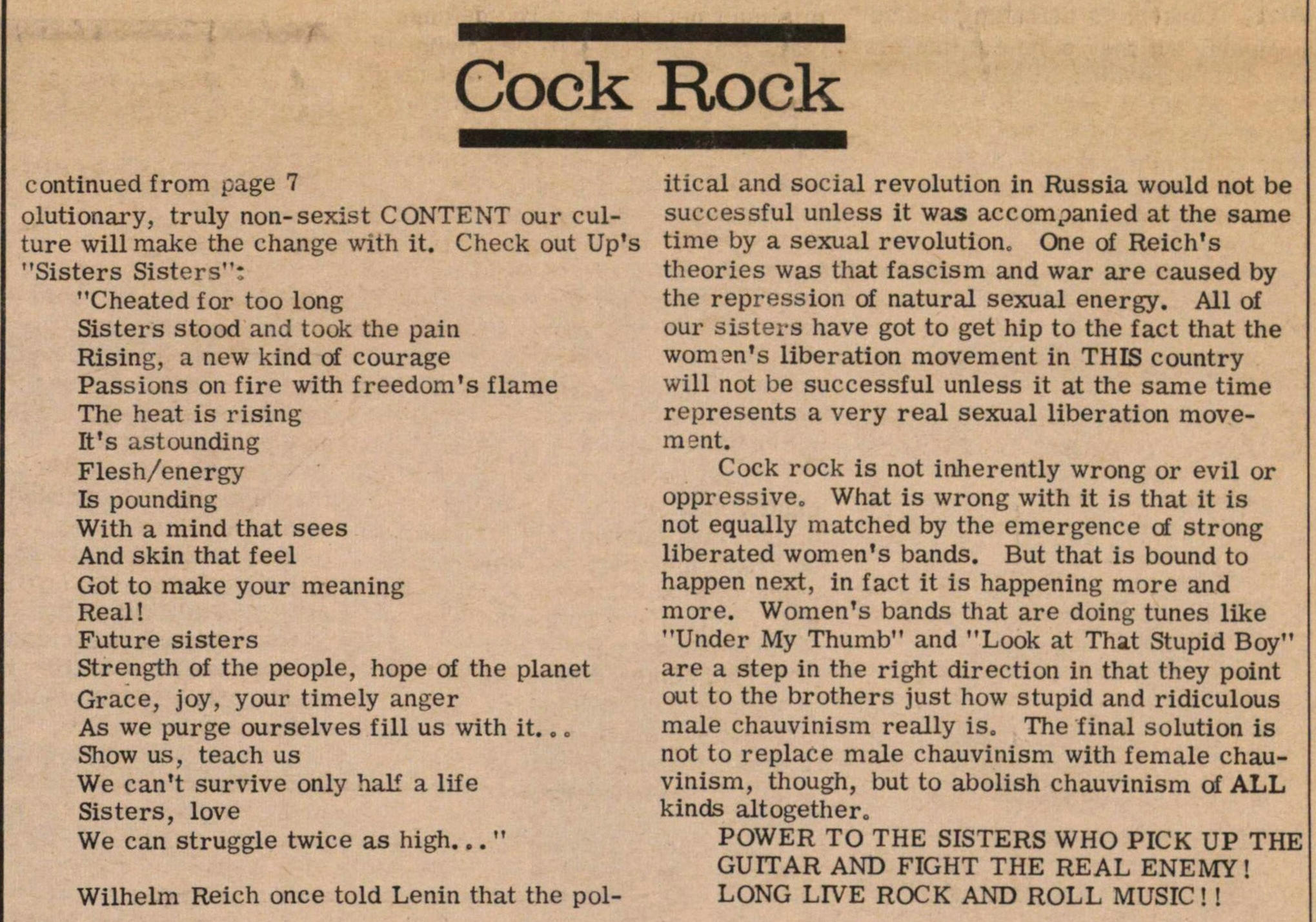 Above are some excerpts from COCK ROCK, ar article that's been read over the air on WABX and WRIF and widely reprinted in underground newspapers all over the country. When I read COCK ROCK I had to say "Right On!"--most lyrics there are very real examples of how horribly sexist our culture still is. But I have to add that I don't share the pessimism, the sense of frustration and hopelessness, of the sister who wrote the article at all. As it stands, COCK ROCK is only half an article--it gives the impression that things are totally fucked up--that there is no role for women in rock and roll, that there never will be, and that things will always be as fucked up as they are right now.

What COCK ROCK overlooks is that revolution is a process and that a total change in consciousness cannot take place overnight, or even in a year or so. Women who think that they can be free as women without struggling with their brothers to change men's consciousness are idealists. Nobody can be free until EVERYBODY is free!

Dig this--a few months ago I was on a panel discussion with Robert Williams, the black revolutionary who founded The Republic of New Africa. Williams had just returned to the U.S. after spending about three years in The People's Republic of China and a sister in the audience asked him if there was a lot of sexism there. He answered by saying he didn't really understand the meaning of the word "sexism" at all.

We've only started to use that term--"sexism"--for a little while now and, like Williams, most brothers (and sisters too!) don't know the full, complete definition of the word. But just

because the idea is new to us doesn't mean that we can expect swift, easy solutions to the problems presented by sexism. Actually, sexism in it's various manifestations is almost as old as the human race itself--and it's going to take a lot more effort than jumping onstage and calling some rock and roll musicians "male-chauvinist pigs" to get rid of it.

Huey P. Newton got right to the core of the contradiction in the movement (the women's liberation movement included) when he said this: "People see things as moving from 'A' to 'B' to 'C' ; they do not see things as moving from 'A' to 'Z. ' In other words, they first have to see some basic accomplishments in order to realize that major successes are possible. Much of the time the revolutionary can guide them into this understanding, but he can never take them from 'A' to 'Z' in one jump, because that is too far ahead. When the revolutionary begins to indulge in 'Z, ' or conclusions, the people do not relate to him."

(I have to stop f or a second here to criticise brother Huey: Although what he says is right on, the sexist language he uses, in referring to revolutionaries as "he" and "him," is not.)

What I want to say is that our brothers will not change and become non-sexist just because we tell them so. They will have to realize themselves how stupid sexism is and that it is not in ANYBODY'S best interest to perpetuate it.

If we believe that change is possible then the question becomes one of tactics. We have to understand, and make our brothers understand, that it is not MEN who are the enemy, but SEXISM ITSELF, which most men are not even aware of yet. If we look at all men as potential brothers, then our criticism will be based on the unity of all of us as a people and will only serve to make us a stronger and more revolutionary people.

What is sexism? How can we explain it?

We know that racism is judging people by the color of their skin first and as human beings second. Sexism simply means judging people by their sex first and as human beings second. In honky society black people are not only seen as different from "whites" but also as inferior to them (white supremacy). Women are not only looked at as different from men, but also as their inferiors--that's male chauvinism.

Sexism is the perpetuation of the role women are cast into from the moment they are born and the doctor exclaims, "It's a girl. " An example of sexism and male chauvinism in a rock and roll band is a band leader refusing to let women audition for a job simply because she is a women, without ever having heard her play a note.

Saying that the post-western culture is just as fucked up as the old, honko-Amerikan culture of our parents is just WRONG--because it denies the facts that revolution is a process and that a change IS happening right now, right here in Amerika. We are only at the beginning stages of

this enormous revolutionary process though, and we've not even reached the half-way point in the development from the old culture to the new. Naturally every part of our culture is still tainted, even dominated, by the consciousness of the old society. But listening to the Rolling Stones is absolutely NOT the same as listening to Herb Alpert and the Tijuana Brass. When we hear some pud on the radio singing about bourgeois romantic "love" with strings slushing away in the background, we get turned off by the music as well as the lyrics. Listening to the Stones (or any other high energy rock and roll band), we might get turned off by the lyrics (IF we can understand them), but we still get super turned on to their music. The FORM is the predominant characteristic of rock and roll music. The message is "ROCK" and "ROLL"!

Most people don't even listen to the lyrics of rock and roll songs. We call our new culture the Rainbow Culture because it's an INTERNATIONAL thing--people all over the world listen to rock and roll--and most of them don't even understand English!

Rock and roll is a manifestation of the new electronic age that helped create a culture that is unlike anything the human race has ever seen before. The turning point in the history of Western civilization was reached with the invention of the electric guitar. The rhythms of rock and roll music have taken us out of our heads and into our bodies, breaking down the phony separations of the Western culture of the honk. We've got to get hip to what Charles Olson meant when he said "Who controls rhythm, controls. " Once we begin to give the FORM of rock and roll a rev-

olutionary, truly non-sexist CONTENT our culture will make the change with it. Check out Up's "Sisters Sisters":

"Cheated for too long

Sisters stood and took the pain

Rising, a new kind of courage

Passions on fire with freedom's flame

The heat is rising

With a mind that sees

And skin that feel

Got to make your meaning

Strength of the people, hope of the planet

As we purge ourselves fill us with it. . .

Show us, teach us

We can't survive only half a life

Wilhelm Reich once told Lenin that the pol

itical and social revolution in Russia would not be successful unless it was accompanied at the same time by a sexual revolution. One of Reich's theories was that fascism and war are caused by the repression of natural sexual energy. All of our sisters have got to get hip to the fact that the women's liberation movement in THIS country will not be successful unless it at the same time represents a very real sexual liberation movement.

Cock rock is not inherently wrong or evil or oppressive. What is wrong with it is that it is not equally matched by the emergence of strong liberated women's bands. But that is bound to happen next, in fact it is happening more and more. Women's bands that are doing tunes like "Under My Thumb" and "Look at That Stupid Boy" are a step in the right direction in that they point out to the brothers just how stupid and ridiculous male chauvinism really is. The final solution is not to replace male chauvinism with female chauvinism, though, but to abolish chauvinism of ALL kinds altogether.

POWER TO THE SISTERS WHO PICK UP THE GUITAR AND FIGHT THE REAL ENEMY! LONG LIVE ROCK AND ROLL MUSIC ! !