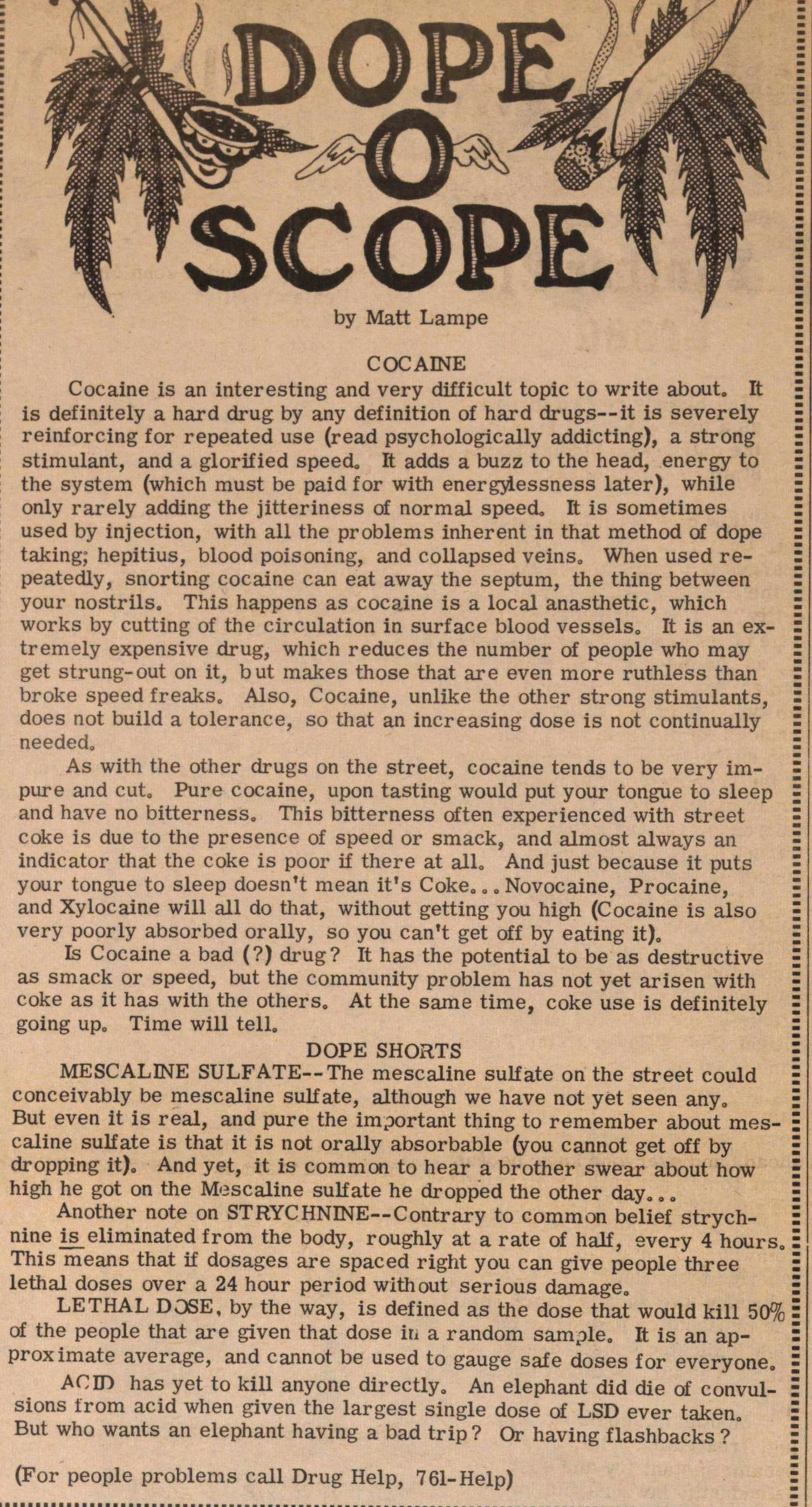 Cocaine is an interesting and very difficult topic to write about. It is definitely a hard drug by any definition of hard drugs - it is severely reinforcing for repeated use (read psychologically addicting), a strong stimulant, and a glorified speed. It adds a buzz to the head, energy to the system (which must be paid for with energylessness later), while only rarely adding the jitteriness of normal speed. It is sometimes used by injection, with all the problems inherent in that method of dope taking; hepititus, blood poisoning, and collapsed veins. When used repeatedly, snorting cocaine can eat away the septum, the thing between your nostrils. This happens as cocaine is a local anesthetic, which works by cutting off the circulation in surface blood vessels. It is an extremely expensive drug, which reduces the number of people who may get strung-out on it, but makes those that are even more ruthless than broke speed freaks. Also, Cocaine, unlike the other strong stimulants, does not build a tolerance, so that an increasing dose is not continually needed.

As with the other drugs on the street, cocaine tends to be very impure and cut. Pure cocaine, upon tasting would put your tongue to sleep and have no bitterness. This bitterness often experienced with street coke is due to the presence of speed or smack, and almost always an indicator that the coke is poor if there at all. And just because it puts your tongue to sleep doesn't mean it's Coke. . . Novocaine, Procaine, and Xylocaine will all do that, without getting you high (Cocaine is also very poorly absorbed orally, so you can't get off by eating it).

Is Cocaine a bad (?) drug? It has the potential to be as destructive as smack or speed, but the community problem has not yet arisen with coke as it has with the others. At the same time, coke use is definitely going up. Time will tell.

MESCALINE SULFATE- The mescaline sulfate on the street could conceivably be mescaline sulfate, although we have not yet seen any. But even if it is real and pure, the important thing to remember about mescaline sulfate is that it is not orally absorbable (you cannot get off by dropping it). And yet, it is common to hear a brother swear about how high he got on the Mescaline sulfate he dropped the other day. . .

Another note on STRYCHNINE-- Contrary to common belief strychnine is eliminated from the body, roughly at a rate of half, every 4 hours. This means that if dosages are spaced right you can give people three lethal doses over a 24 hour period without serious damage.

LETHAL DOSE, by the way, is defined as the dose that would kill 50% of the people that are given that dose in a random sample. It is an approximate average, and cannot be used to gauge safe doses for everyone.

ACID has yet to kill anyone directly. An elephant did die of convulsions from acid when given the largest single dose of LSD ever taken. But who wants an elephant having a bad trip ? Or having flashbacks ?