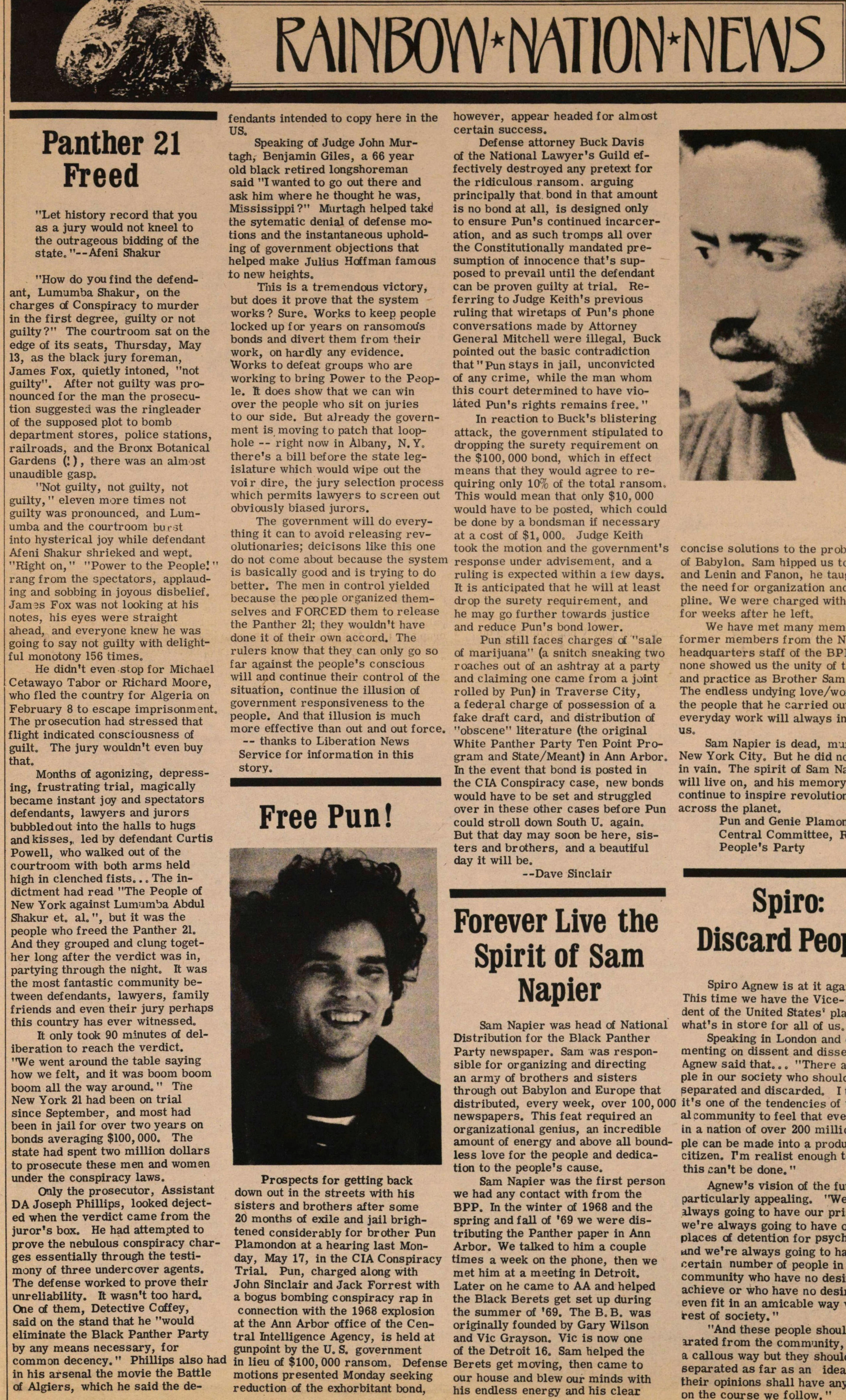 "Let history record that you as a jury would not kneel to the outrageous bidding of the state. "-- Afeni Shakur

"How do you find the defendant, Lumumba Shakur, on the charges of Conspiracy to murder in the first degree, guilty or not guilty?" The courtroom sat on the edge of its seats, Thursday, May 13th, as the black jury foreman, James Fox, quietly intoned, "not guilty". After not guilty was pronounced for the man the prosecution suggested was the ringleader of the supposed plot to bomb department stores, police stations, railroads, and the Bronx Botanical Gardens (!) , there was an almost inaudible gasp.

"Not guilty, not guilty, not guilty," eleven more times not guilty was pronounced, and Lumumba and the courtroom burst into hysterical joy while defendant Afeni Shakur shrieked and wept. "Right on," "Power to the People!" rang from the spectators, applauding and sobbing in joyous disbelief. James Fox was not looking at his notes, his eyes were straight ahead, and everyone knew he was going to say not guilty with delightful monotony 156 times.

He didn't even stop for Michael Cetawayo Tabor or Richard Moore, who fled the country for Algeria on February 8th to escape imprisonment. The prosecution had stressed that flight indicated consciousness of guilt. The jury wouldn't even buy that.

Months of agonizing, depressing, frustrating trial, magically became instant joy and spectators defendants, lawyers and jurors bubbled out into the halls to hugs and kisses, led by defendant Curtis Powell, who walked out of the courtroom with both arms held high in clenched fists... The indictment had read "The People of New York against Lumumba Abdul Shakur et. al.", but it was the people who freed the Panther 21. And they grouped and clung together long after the verdict was in, partying through the night. It was the most fantastic community between defendants, lawyers, family friends and even their jury perhaps this country has ever witnessed.

It only took 90 minutes of deliberation to reach the verdict. "We went around the table saying how we felt, and it was boom boom boom all the way around. " The New York 21 had been on trial since September, and most had been in jail for over two years on bonds averaging $100,000. The state had spent two million dollars to prosecute these men and women under the conspiracy laws.

Only the prosecutor, Assistant DA Joseph Phillips, looked dejected when the verdict came from the juror's box. He had attempted to prove the nebulous conspiracy charges essentially through the testimony of three undercover agents. The defense worked to prove their unreliability. It wasn't too hard. One of them, Detective Coffey, said on the stand that he "would eliminate the Black Panther Party by any means necessary, for common decency." Phillips also had in his arsenal the movie the Battle of Algiers, which he said the defendants intended to copy here in the US.

Speaking of Judge John Murtagh, Benjamin Giles, a 66 year old black retired longshoreman said "I wanted to go out there and ask him where he thought he was, Mississippi ?" Murtagh helped take the sytematic denial of defense motions and the instantaneous upholding of government objections that helped make Julius Hoffman famous to new heights.

This is a tremendous victory, but does it prove that the system works? Sure. Works to keep people locked up for years on ransomous bonds and divert them from their work, on hardly any evidence. Works to defeat groups who are working to bring Power to the People. It does show that we can win over the people who sit on juries to our side. But already the government is moving to patch that loophole - right now in Albany, N.Y. there's a bill before the state legislature which would wipe out the voir dire, the jury selection process which permits lawyers to screen out obviously biased jurors.

The government will do everything it can to avoid releasing revolutionaries; decisions like this one do not come about because the system is basically good and is trying to do better. The men in control yielded because the people organized themselves and FORCED them to release the Panther 21; they wouldn't have done it of their own accord. The rulers know that they can only go so far against the people's conscious will and continue their control of the situation, continue the illusion of government responsiveness to the people. And that illusion is much more effective than out and out force.

-- thanks to Liberation News Service for information in this story.