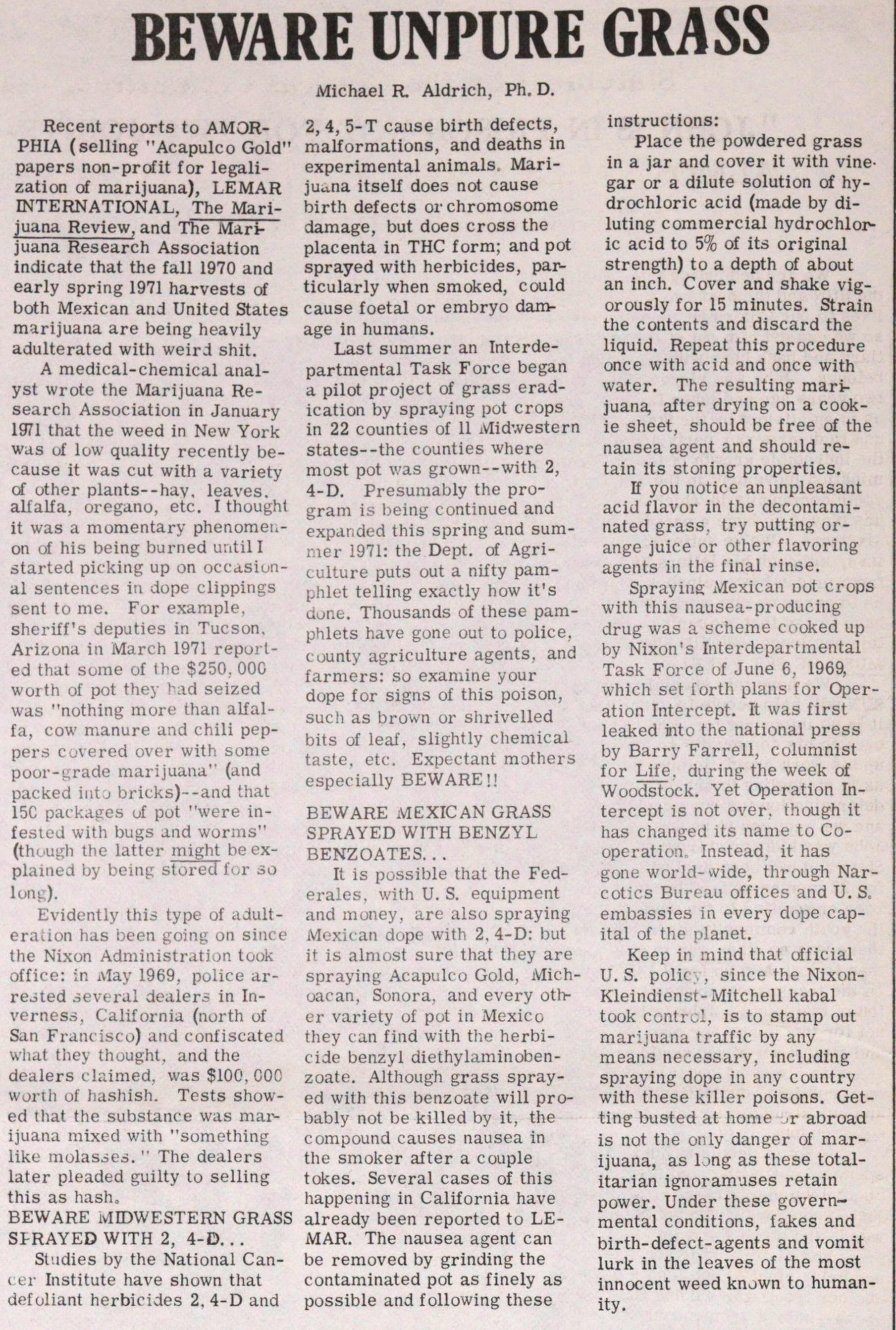 Recent reports to AMORPHIA (selling "Acapulco Gold" papers non-profit for legalization of marijuana), LEMAR INTERNATIONAL, The Marijuana Review, and The Marijuana Research Association indícate that the fall 1970 and early spring 1971 harvests of both Mexican and United States marijuana are being heavily adulterated with weird shit. A medical-chemical analyst wrote the Marijuana Research Association in January 1971 that the weed in New York was of low quality recently because it was cut with a variety of other plants--hav, leaves. alfalfa, orégano, etc. I thought it was a momentary phenomeiion of nis being burned untlll started picklng up on occasiunal sentences in dope clippings sent to me. For example, sheriff's deputies in Tucson. Arizona in Maren 1971 repurled that sume of tbc $250, OOG worth of pot they had seized was "nothing more than alfalfa, cow manure and chili peppers covered over with some poor-grade marijuana" (and packed into bricks)--and that 15C packages of pot "were lnfested with bugs and wornis" (though tbc latter might beexplained by being stored for so long). Evidently thiá type of adulteración has been going on since the Nixon Administratlon tuok office: in May 1969, pólice arreóted áeveral dealers in Invernes.s. California (north of San Francisco) and confiscated Whal they thought, and the dealers claimed, was $100, COC worth of liashish. Tests showed that the substance was marijuana mixed with "something like molasjcá. " The dealers later pleaded guilty to selling this as hash, BEWARE MIDWESTERN GRASS SI-RAYED WITH 2, A-D... Studies by the National Cani er Institute have shown that defoliant herbicides 2, 4-D and 2, 4, 5-T cause birth defects, malformations, and deaths in experimental animáis. Marijuana itself does not cause birth defects or chromosome damage, but does cross the placenta in THC íorm; and pot sprayed with herbicides, particular ly when smoked, could cause foetal or embryo damage in humans. Last summer an Interdepartmental Task Forcé began a pilot project of grass eradication by spraying pot crops in 22 counties of 11 Midwestern states - the counties where most pot was grown--with 2, 4-D. Presumably the program is being continued and expanded this spring and summer 1971: the Dept. of Agriculture puts out a nifty pamphlet telling exactly how it's done. Thousands of these pamphlets have gone out to pólice. county agriculture agents, and farmers: so examine your dope for signs of this poison, such as brown or shrivelled bits of leaf. slightly chemical taste, etc. Expcctant mothers especially BEWARE!! BEWARE MEXICAN GRASS SPRAYED WITH BENZYL BENZOATES. . . It is possible that the Federales, with U. S. equipment and money, are also spraying Mcxican dope with 2, 4-D: but it is almost sure that they are spraying Acapulco Gold, Michoacan, Sonora, and every other variety of pot in Mexico they can find with the herbicide benzyl diethylaminobenzoate. Although grass sprayed with this benzoate will probably not be killed by it, the compound causes nausea in the smoker af ter a couple tokes. Several cases of this happening in California have already been reported to LEMAR. The nausea agent can be removed by grinding the contaminated pot as finely as possible and f ollowing these instructions: Place the powdered grass in a jar and cover it with vinegar or a dilute solution of hydrochloric acid (made by diluting commercial hydrochloric acid to 5% of its original strength) to a depth of about an inch. Cover and shake vigorously for 15 minutes. Strain the contents and discard the liquid. Repeat this procedure once with acid and once with water. The resulting marijuana, after drying on a cookie sheet, should be free of the nausea agent and should retain its stoning properties. K you notice anunpleasant acid flavor in the decontaminated grass. try Dutting orange juice or other flavoring agents in the final rinse. Spraying Mexican Dot crops with this prüduc ing drug was a écheme cooked up by Nixon's Interdepartmental Task Force of June 6, 1969, which set iorth plans for Operation Intercept. It was first leaked into the national press by Barry Farrell, columnist for Life, during the week of Woodstock. Yet Operation Intercept is not over. ihough it has changed its name to Cooperation. Instead, it has gone world-vvide, through Narcotics Bureau offices and U. S. embassies in every dope capital of the planet. Keep in mind that official U. S. polk;. , since the NixonKleindienst-Mitchell kabal took control, is to stamp out marijuana traffic by any means necessary, including spraying dope in any country with these killer poisons. Getting busted at home ir abroad is not the only danger of marijuana, as 1 ng as these totalitarian ignoramuses retain power. Under these governmental conditions, fakes and agents and vomit lurk in the leaves of the most innocent weed known to humanity.