An Appeal To Reason 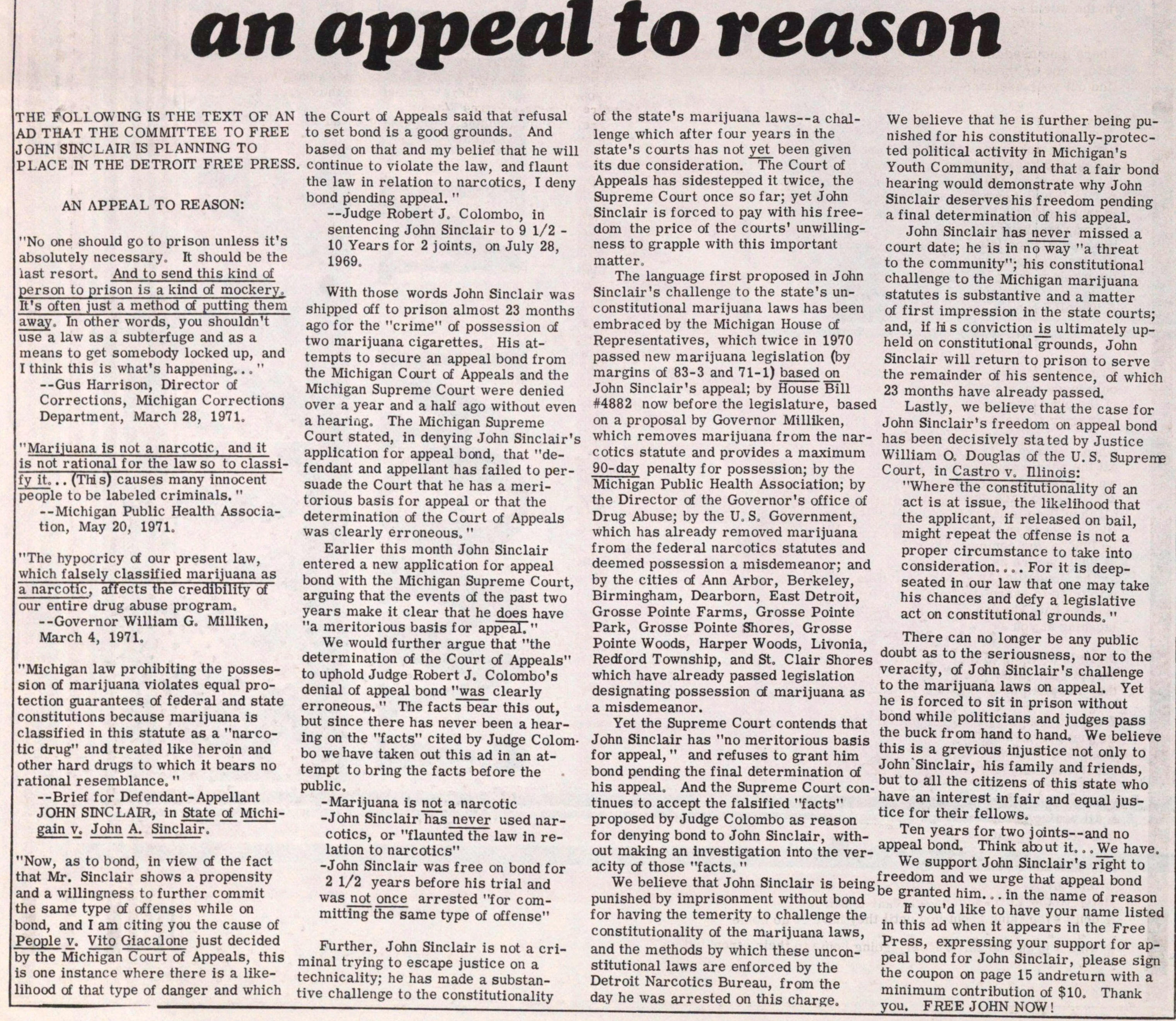 an appeal to reason

THE FOLLOWING IS THE TEXT OF AN AD THAT THE COMMITTEE TO FREE JOHN SINCLAIR IS PLANNING TO PLACE IN THE DETROIT FREE PRESS.

AN APPEAL TO REASON:

"No one should go to prison unless it's absolutely necessary. It should be the last resort. And to send this kind of person to prison is a kind of mockery. It's often just a method of putting them away. In other words, you shouldn't use a law as a subterfuge and as a means to get somebody locked up, and I think this is what's happening. . . " - Gus Harrison, Director of Corrections, Michigan Corrections Department, March 28, 1971.

"Marijuana is not a narcotic, and it is not rational for the law so to classify it. . . (This) causes many innocent people to be labeled criminals. " - Michigan Public Health Association, May 20, 1971.

"The hypocricy of our present law, which falsely classified marijuana as a narcotic, affects the credibility of our entire drug abuse program. - Governor William G. Milliken, March 4, 1971.

"Michigan law prohibiting the possession of marijuana violates equal protection guarantees of federal and state constitutions because marijuana is classified in this statute as a "narcotic drug" and treated like heroin and other hard drugs to which it bears no rational resemblance. " - Brief for Defendant-Appellant JOHN SINCLAIR, in State of Michigain v. John A. Sinclair.

"Now, as to bond, in view of the fact that Mr. Sinclair shows a propensity and a willingness to further commit the same type af offenses while on bond, and I am citing you the cause of People v. Vito Giacalone just decided by the Michigan Court of Appeals, this is one instance where there is a likelihood of that type of danger and which the Court of Appeals said that refusal to set bond is a good grounds. And based on that and my belief that he will continue to violate the law, and flaunt the law in relation to narcotics, I deny bond pending appeal. " - Judge Robert J. Colombo, in sentencing John Sinclair to 9 1/2 - 10 Years for 2 joints, on July 28, 1969.

With those words John Sinclair was shipped off to prison almost 23 months ago for the "crime" of possession of two marijuana cigarettes. His attempts to secure an appeal bond from the Michigan Court of Appeals and the Michigan Supreme Court were denied over a year and a half ago without even a hearing. The Michigan Supreme Court stated, in denying John Sinclair's application for appeal bond, that "defendant and appellant has failed to persuade the Court that he has a meritorious basis for appeal or that the determination of the Court of Appeals was clearly erroneous."

Earlier this month John Sinclair entered a new application for appeal bond with the Michigan Supreme Court, arguing that the events of the past two years make it clear that he does have "a meritorious basis for appeal. "

We would further argue that "the determination of the Court of Appeals" to uphold Judge Robert J. Colombo's denial of appeal bond "was clearly erroneous." The facts bear this out, but since there has never been a hearing on the "facts" cited by Judge Colombo we have taken out this ad in an attempt to bring the facts before the public.

- Marijuana is not a narcotic

- John Sinclair has never used narcotics, or "flaunted the law in relation to narcotics"

Further, John Sinclair is not a criminal trying to escape justice on a technicality; he has made a substantive challenge to the constitutionality of the state's marijuana laws - a challenge which after four years in the state's courts has not yet been given its due consideration. The Court of Appeals has sidestepped it twice, the Supreme Court once so far; yet John Sinclair is forced to pay with his freedom the price of the courts' unwillingness to grapple with this important matter.

The language first proposed in John Sinclair's challenge to the state's unconstitutional marijuana laws has been embraced by the Michigan House of Representatives, which twice in 1970 passed new marijuana legislation (by margins of 83-3 and 71-1) based on John Sinclair's appeal; by House Bill #4882 now before the legislature, based on a proposal by Governor Milliken, which removes marijuana from the narcotics statute and provides a maximum 90-day penalty for possession; by the Michigan Public Health Association; by the Director of the Governor's office of Drug Abuse; by the U. S. Government, which has already removed marijuana from the federal narcotics statutes and deemed possession a misdemeanor; and by the cities af Ann Arbor, Berkeley, Birmingham, Dearborn, East Detroit, Grosse Pointe Farms, Grosse Pointe Park, Grosse Pointe Shores, Grosse Pointe Woods, Harper Woods, Livonia, Redford Township, and St. Clair Shores which have already passed legislation designating possession of marijuana as a misdemeanor.

We believe that John Sinclair is being punished by imprisonment without bond for having the temerity to challenge the constitutionality of the marijuana laws, and the methods by which these unconstitutional laws are enforced by the Detroit Narcotics Bureau, from the day he was arrested on this charge.

We believe that he is further being punished for his constitutionally-protected political activity in Michigan's Youth Community, and that a fair bond hearing would demonstrate why John Sinclair deserves his freedom pending a final determination of his appeal.

John Sinclair has never missed a court date; he is in no way "a threat to the community"; his constitutional challenge to the Michigan marijuana statutes is substantive and a matter of first impression in the state courts; and, if his conviction is ultimately upheld on constitutional grounds, John Sinclair will return to prison to serve the remainder of his sentence, of which 23 months have already passed.

Lastly, we believe that the case for John Sinclair's freedom on appeal bond has been decisively stated by Justice William O. Douglas of the U. S. Suprema Court, in Castro v. Illinois:

"Where the constitutionality of an act is at issue, the likelihood that the applicant, if released on bail, might repeat the offense is not a proper circumstance to take into consideration. . . . For it is deepseated in our law that one may take his chances and defy a legislative act on constitutional grounds. "

There can no longer be any public doubt as to the seriousness, nor to the veracity, of John Sinclair's challenge to the marijuana laws on appeal. Yet he is forced to sit in prison without bond while politicians and judges pass the buck from hand to hand. We believe this is a grevious injustice not only to John "Sinclair, his family and friends, but to all the citizens of this state who have an interest in fair and equal justice for their fellows.

Ten years for two joints - and no appeal bond. Think about it... We have.

We support John Sinclair's right to freedom and we urge that appeal bond be granted him... in the name of reason.

If you'd like to have your name listed in this ad when it appears in the Free Press, expressing your support for appeal bond for John Sinclair, please sign the coupon on page 15 and return with a minimum contribution of $10. Thank you. FREE JOHN NOW!