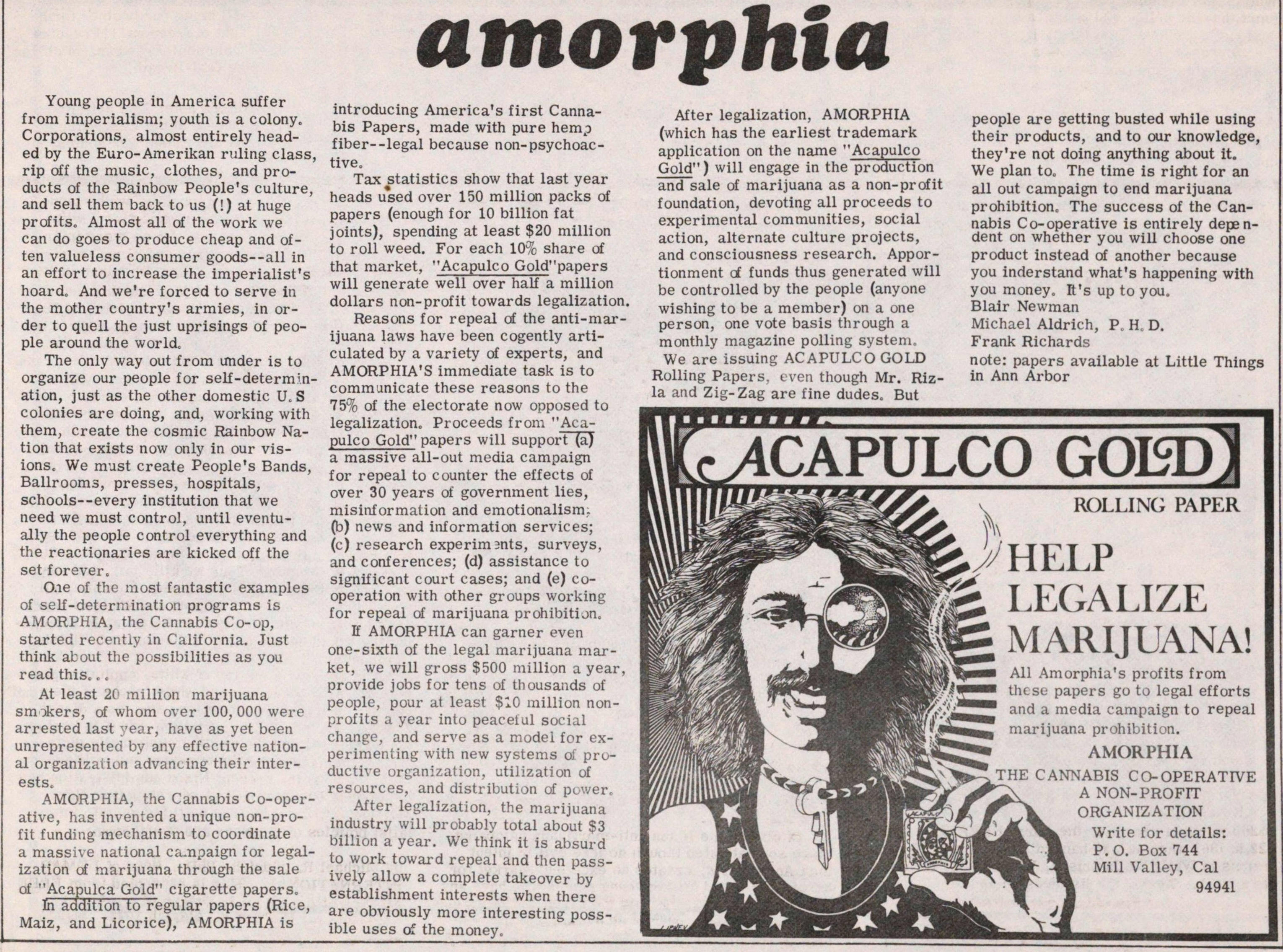 Young people in America suffer from imperialism; youth is a colony. Corporations, almost entirely headed by the Euro-Amerikan ruling class, rip off the music, clothes, and products of the Rainbow People's culture, and sell them back to us (!) at huge profits. Almost all of the work we can do goes to produce cheap and often valueless consumer goods--all in an effort to increase the imperialist's hoard. And we're forced to serve in the mother country's armies, in order to quell the just uprisings of people around the world.

The only way out from under is to organize our people for self-determination, just as the other domestic U.S. colonies are doing, and, working with them, create the cosmic Rainbow Nation that exists now only in our visions. We must create People's Bands, Ballrooms, presses, hospitals, schools--every institution that we need we must control, until eventually the people control everything and the reactionaries are kicked off the set forever.

One of the most fantastic examples of self-determination programs is AMORPHIA, the Cannabis Co-op, started recently in California. Just think about the possibilities as you read this. . .

At least 20 million marijuana smokers, of whom over 100,000 were arrested last year, have as yet been unrepresented by any effective national organization advancing their interests.

AMORPHIA, the Cannabis Co-operative, has invented a unique non-profit funding mechanism to coordinate a massive national campaign for legalization of marijuana through the sale of "Acapulco Gold" cigarette papers.

In addition to regular papers (Rice, Maiz, and Licorice), AMORPHIA is introducing America's first Cannabis Papers, made with pure hemp fiber--legal because non-psychoactive. Tax statistics show that last year heads used over 150 million packs of papers (enough for 10 billion fat joints), spending at least $20 million to roll weed. For each 10% share of that market, "Acapulco Gold" papers will generate well over half a million dollars non-profit towards legalization.

Reasons for repeal of the anti-marijuana laws have been cogently articulated by a variety of experts, and AMORPHIA'S immediate task is to communicate these reasons to the 75% of the electorate now opposed to legalization. Proceeds from "Acapulco Gold" papers will support (a) a massive all-out media campaign for repeal to counter the effects of over 30 years of government lies, misinformation and emotionalism; (b) news and information services; (c) research experiments, surveys, and conferences; (d) assistance to significant court cases; and (e) cooperation with other groups working for repeal of marijuana prohibition.

If AMORPHIA can garner even one-sixth of the legal marijuana market, we will gross $500 million a year, provide jobs for tens of thousands of people, pour at least $10 million nonprofits a year into peaceful social change, and serve as a model for experimenting with new systems of productive organization, utilization of resources, and distribution of power.

After legalization, the marijuana industry will probably total about $3 billion a year. We think it is absurd to work toward repeal and then passively allow a complete takeover by establishment interests when there are obviously more interesting possible uses of the money.

After legalization, AMORPHIA (which has the earliest trademark application on the name "Acapulco Gold") will engage in the production and sale of marijuana as a non-profit foundation, devoting all proceeds to experimental communities, social action, alternate culture projects, and consciousness research. Apportionment of funds thus generated will be controlled by the people (anyone wishing to be a member) on a one person, one vote basis through a monthly magazine polling system.

We are issuing ACAPULCO GOLD Rolling Papers, even though Mr. Rizla and Zig-Zag are fine dudes. But people are getting busted while using their products, and to our knowledge, they're not doing anything about it. We plan to. The time is right for an all out campaign to end marijuana prohibition. The success of the Cannabis Co-operative is entirely dependent on whether you will choose one product instead of another because you understand what's happening with your money. It's up to you.

All Amorphia's profits from these papers go to legal efforts and a media campaign to repeal marijuana prohibition.