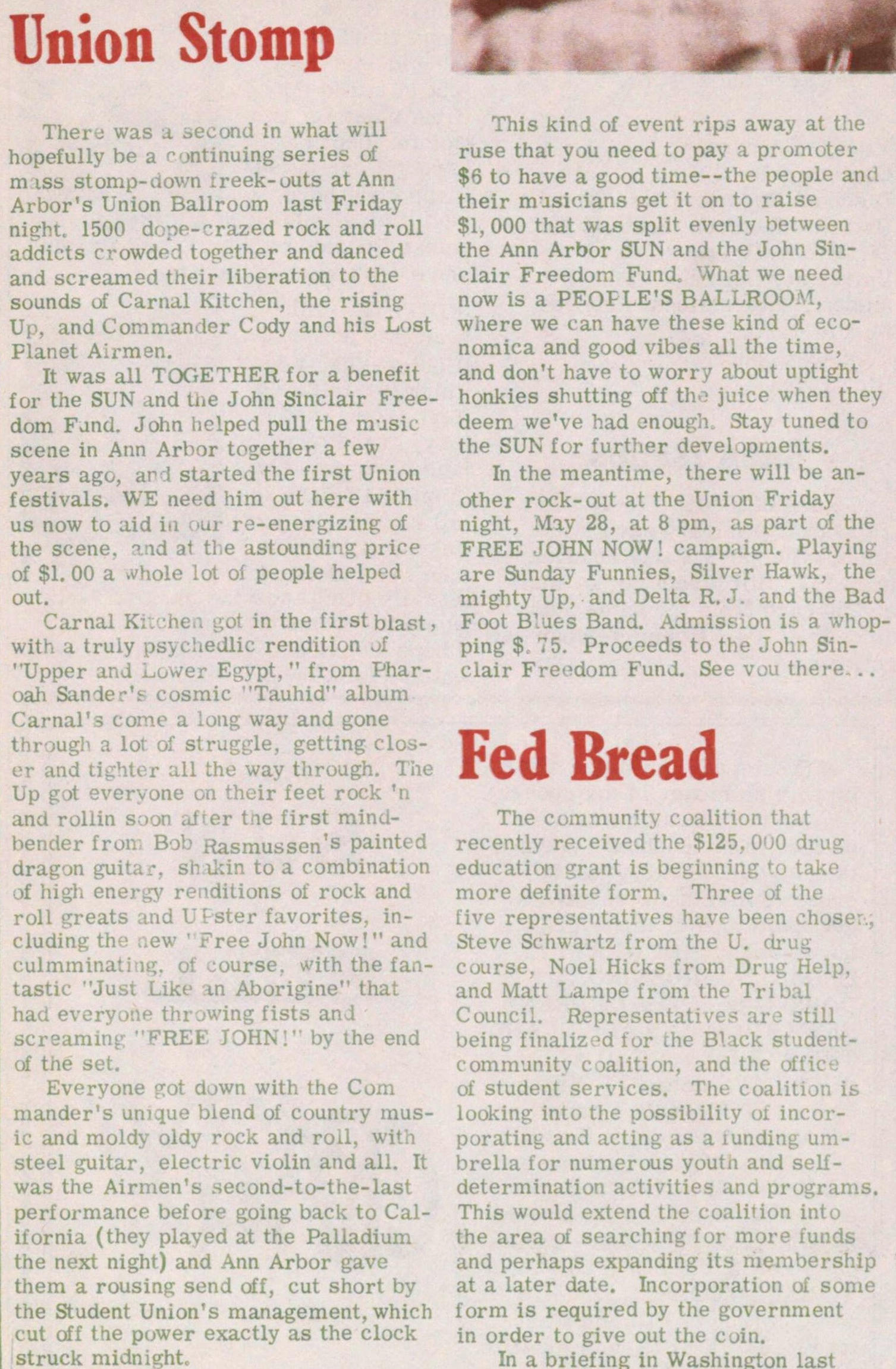 There was a second in what will hopefully be a continuing series of mass stomp-down freek-outs at Ann Arbor's Union Ballroom last Friday night. 1500 dope-crazed rock and roll addicts crowded together and danced and screamed their liberation to the sounds of Carnal Kitchen, the rising Up, and Commander Cody and his Lost Planet Airmen.

It was all TOGETHER for a benefit for the SUN and the John Sinclair Freedom Fund. John helped pull the music scene in Ann Arbor together a few years ago, and started the first Union festivals. WE need him out here with us now to aid in our re-energizing of the scene, and at the astounding price of $1.00 a whole lot of people helped out.

Carnal Kitchen got in the first blast, with a truly psychedelic rendition of "Upper and Lower Egypt," from Pharoah Sander's cosmic "Tauhid" album. Carnal 's come a long way and gone through a lot of struggle, getting closer and tighter all the way through. The Up got everyone on their feet rock 'n and rollin soon after the first mindbender from Bob Rasmussen's painted dragon guitar, shakin to a combination of high energy renditions of rock and roll greats and UPster favorites, including the new '"Free John Now!" and culminating, of course, with the fantastic "Just Like an Aborigine" that had everyone throwing fists and screaming "FREE JOHN!" by the end of the set.

Everyone got down with the Commander's unique blend of country music and moldy oldy rock and roll, with steel guitar, electric violin and all. It was the Airmen's second-to-the-last performance before going back to California (they played at the Palladium the next night) and Ann Arbor gave them a rousing send off, cut short by the Student Union's management, which cut off the power exactly as the clock struck midnight.

This kind of event rips away at the ruse that you need to pay a promoter $6 to have a good time--the people and their musicians get it on to raise $1,000 that was split evenly between the Ann Arbor SUN and the John Sinclair Freedom Fund. What we need now is a PEOPLE'S BALLROOM, where we can have these kind of economica and good vibes all the time, and don't have to worry about uptight honkies shutting off the juice when they deem we've had enough. Stay tuned to the SUN for further developments.

In the meantime, there will be another rock-out at the Union Friday night, May 28, at 8 pm, as part of the FREE JOHN NOW! campaign. Playing are Sunday Funnies, Silver Hawk, the mighty Up, and Delta R.J. and the Bad Foot Blues Band. Admission is a whopping $.75. Proceeds to the John Sinclair Freedom Fund. See you there, . .