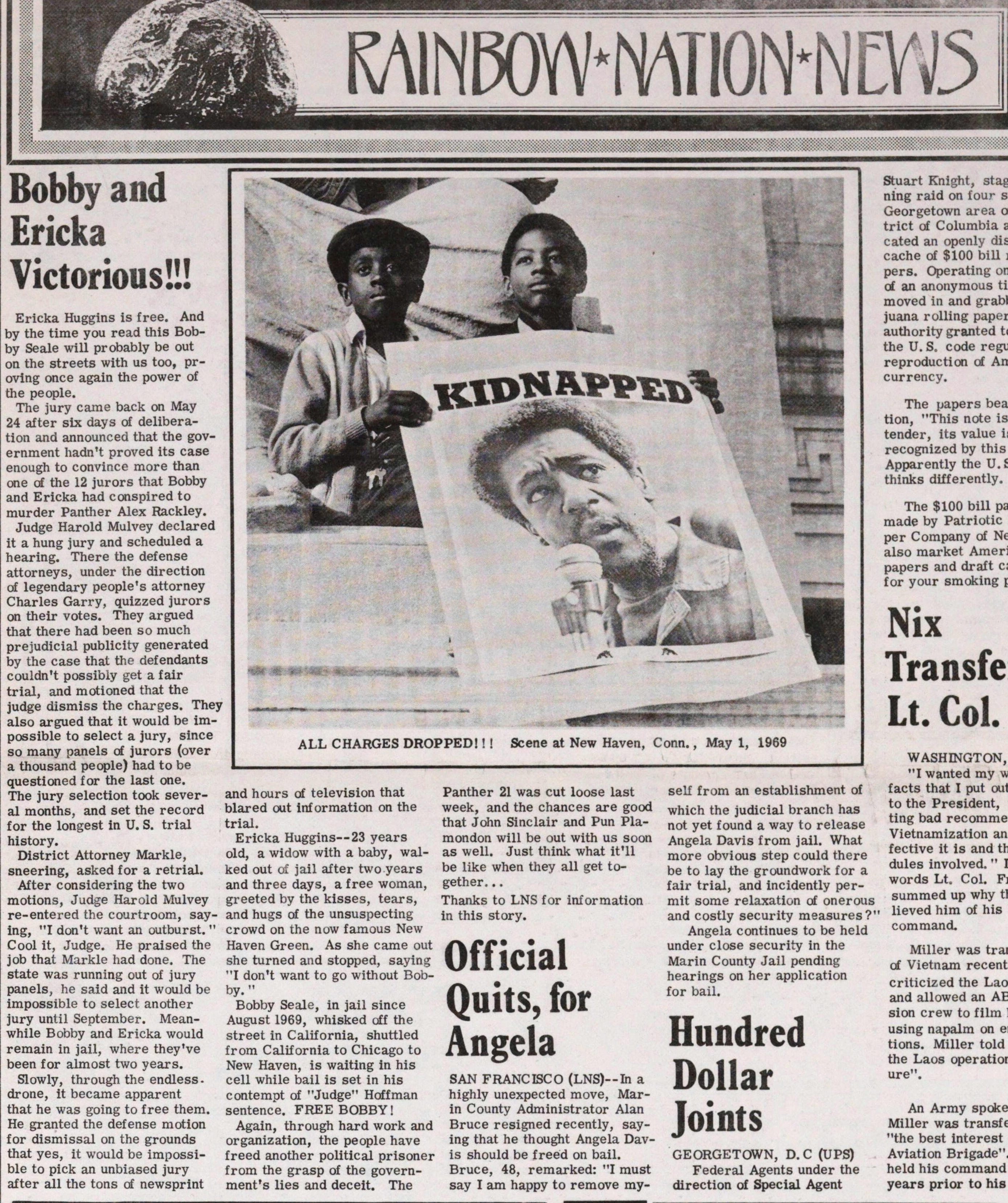 Ericka Huggins is free. And by the time you read this Bobby Seale will probably be out on the streets with us too, proving once again the power of the people.

The jury carne back on May 24 after six days of deliberation and announced that the government hadn't proved its case enough to convince more than one of the 12 jurors that Bobby and Ericka had conspired to murder Panther Alex Rackley.

Judge Harold Mulvey declared it a hung jury and scheduled a hearing. There the defense attorneys, under the direction of legendary people's attorney Charles Garry, quizzed jurors on their votes. They argued that there had been so much prejudicial publicity generated by the case that the defendants couldn't possibly get a fair trial, and motioned that the judge dismiss the charges. They also argued that it would be impossible to select a jury, since so many panels of jurors (over a thousand people) had to be questioned for the last one. The jury selection took several months, and set the record f or the longest in U. S. trial history.

After considering the two motions, Judge Harold Mulvey re-entered the courtroom, saying, "I don't want an outburst." Cool it, Judge. He praised the job that Markle had done. The state was running out of jury panels, he said and it would be impossible to select another jury until September. Meanwhile Bobby and Ericka would remain in jail, where they've been for almost two years.

Slowly, through the endless drone, it became apparent that he was going to free them. He granted the defense motion for dismissal on the grounds that yes, it would be impossible to pick an unbiased jury after all the tons of newsprint and hours of television that blared out Information on the trial.

Ericka Huggins--23 years old, a widow with a baby, walked out of jail after two years and three days, a free woman, greeted by the kisses, tears, and hugs of the unsuspecting crowd on the now famous New Haven Green. As she carne out she turned and stopped, saying "I don't want to go without Bobby."

Bobby Seale, in jail since August 1969, whisked off the street in California, shuttled from California to Chicago to New Haven, is waiting in his cell while bail is set in his contempt of "Judge" Hoffman sentence. FREE BOBBY!

Again, through hard work and organization, the people have freed another political prisoner from the grasp of the government's lies and deceit. The Panther 21 was cut loose last week, and the chances are good that John Sinclair and Pun Plamondon will be out with us soon as well. Just think what it'll be like when they all get together. . .

Thanks to LNS for information in this story.