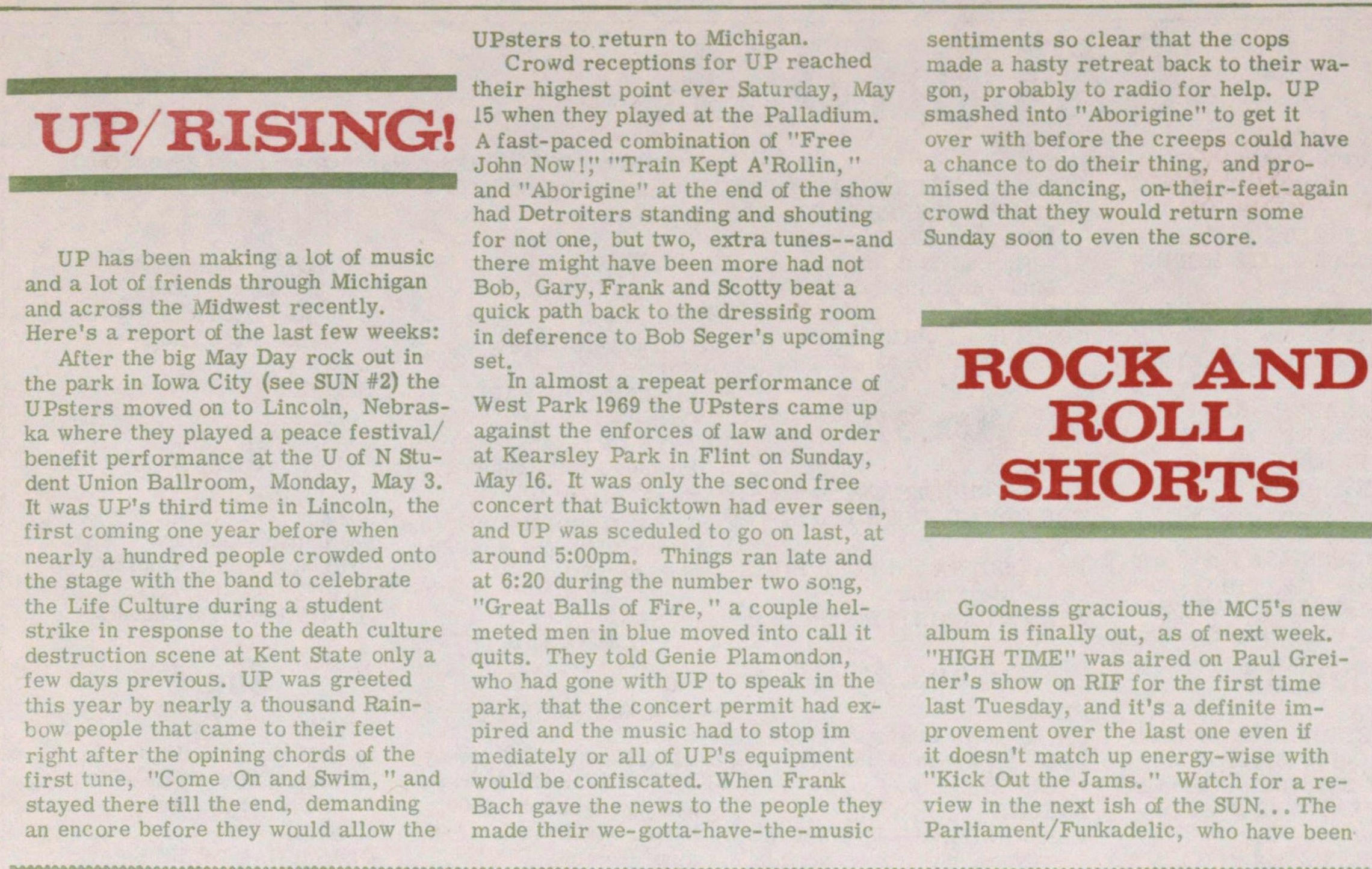 UP has been making a lot of music and a lot of friends through Michigan and across the Midwest recently. Here's a report of the last few weeks:

After the big May Day rock out in the park in Iowa City (see SUN #2) the UPsters moved on to Lincoln, Nebraska where they played a peace festival/benefit performance at the U of N Student Union Ballroom, Monday, May 3. It was UP's third time in Lincoln, the first coming one year before when nearly a hundred people crowded onto the stage with the band to celebrate the Life Culture during a student strike in response to the death culture destruction scene at Kent State only a few days previous. UP was greeted this year by nearly a thousand Rainbow people that carne to their feet right after the opening chords of the first tune, "Come On and Swim," and stayed there till the end, demanding an encore before they would allow the UPsters to return to Michigan.

Crowd receptions for UP reached their highest point ever Saturday, May 15 when they played at the Palladium. A fast-paced combination of "Free John Now!," "Train Kept A'Rollin," and "Aborigine" at the end of the show had Detroiters standing and shouting for not one, but two, extra tunes--and there might have been more had not Bob, Gary, Frank and Scotty beat a quick path back to the dressing room in deference to Bob Seger's upcoming set.

In almost a repeat performance of West Park 1969 the UPsters came up against the enforcers of law and order at Kearsley Park in Flint on Sunday, May 16. It was only the second free concert that Buicktown had ever seen, and UP was scheduled to go on last, at around 5:00pm. Things ran late and at 6:20 during the number two song, "Great Balls of Fire," a couple helmeted men in blue moved in to call it quits. They told Genie Plamondon, who had gone with UP to speak in the park, that the concert permit had expired and the music had to stop immediately or all of UP's equipment would be confiscated. When Frank Bach gave the news to the people they made their we-gotta-have-the-music sentiments so clear that the cops made a hasty retreat back to their wagon, probably to radio for help. UP smashed into "Aborigine" to get it over with before the creeps could have a chance to do their thing, and promised the dancing, on-their-feet-again crowd that they would return some Sunday soon to even the score.