The Psychedelic Rangers Want You! 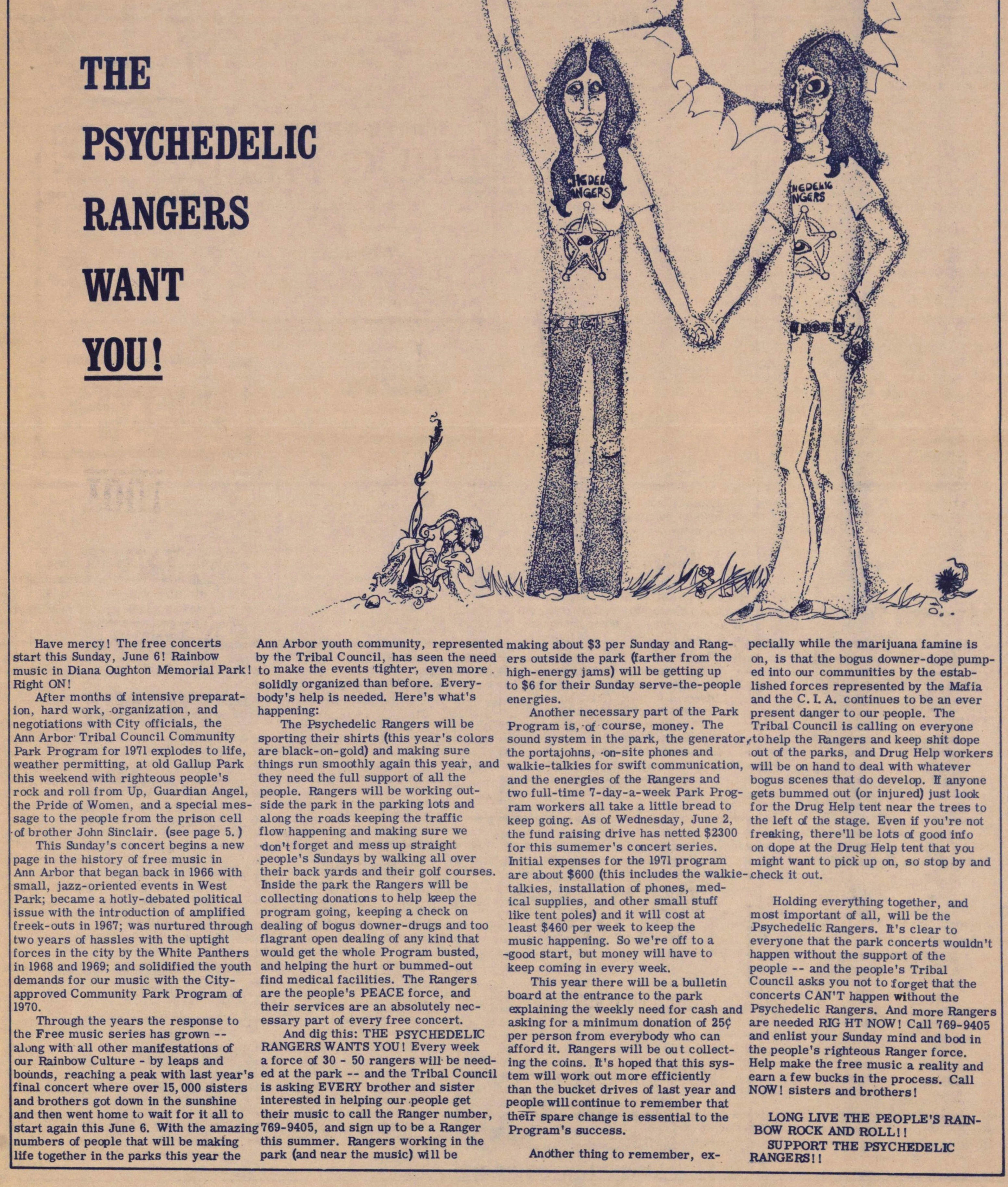 THE PSYCHEDELIC RANGERS WANT YOU!

After months of intensive preparation, hard work, organization, and negotiations with City officials, the Ann Arbor Tribal Council Community Park Program for 1971 explodes to life, weather permitting, at old Gallup Park this weekend with righteous people's rock and roll from Up, Guardian Angel, the Pride of Women, and a special message to the people from the prison cell of brother John Sinclair, (see page 5.)

This Sunday's concert begins a new page in the history of free music in Ann Arbor that began back in 1966 with small, jazz-oriented events in West Park; became a hotly-debated political issue with the introduction of amplified freak-outs in 1967; was nurtured through two years of hassles with the uptight forces in the city by the White Panthers in 1968 and 1969; and solidified the youth demands for our music with the City approved Community Park Program of 1970.

Through the years the response to the Free music series has grown -- along with all other manifestations of our Rainbow Culture - by leaps and bounds, reaching a peak with last year's final concert where over 15,000 sisters and brothers got down in the sunshine and then went home to wait for it all to start again this June 6. With the amazing numbers of people that will be making life together in the parks this year the Ann Arbor youth community, represented by the Tribal Council, has seen the need to make the events tighter, even more solidly organized than before. Everybody's help is needed. Here's what's happening:

The Psychedelic Rangers will be sporting their shirts (this year's colors are black-on-gold) and making sure things run smoothly again this year, and they need the full support of all the people. Rangers will be working outside the park in the parking lots and along the roads keeping the traffic flow happening and making sure we don't forget and mess up straight people's Sundays by walking all over their back yards and their golf courses. Inside the park the Rangers will be collecting donations to help keep the program going, keeping a check on dealing of bogus downer-drugs and too flagrant open dealing of any kind that would get the whole Program busted, and helping the hurt or bummed-out find medical facilities. The Rangers are the people's PEACE force, and their services are an absolutely necessary part of every free concert.

And dig this: THE PSYCHEDELIC RANGERS WANTS YOU ! Every week a force of 30 - 50 rangers be needed at the park - and the Tribal Council is asking EVERY brother and sister interested in helping our people get their music to call the Ranger number, ; 769-9405, and sign up to be a Ranger this summer. Rangers working in the park (and near the music) will be making about $3 per Sunday and Rangers outside the park (farther from the high-energy jams) will be getting up to $6 for their Sunday serve-the-people energies.

Another necessary part of the Park Program is, of course, money. The sound system in the park, the generator the portajohns, on-site phones and walkie-talkies for swift communication, and the energies of the Rangers and two full-time 7-day-a-week Park Program workers all take a little bread to keep going. As of Wednesday, June 2, the fund raising drive has netted $2300 for this summer's concert series. Initial expenses for the 1971 program are about $600 (this includes the walkie-talkies, installation of phones, medical supplies, and other small stuff like tent poles) and it will cost at least $460 per week to keep the music happening. So we 're off to a good start, but money will have to keep coming in every week.

This year there will be a bulletin board at the entrance to the park explaining the weekly need for cash and asking for a minimum donation of 25 cents per person from everybody who can afford it. Rangers will be out collecting the coins. E's hoped that this system will work out more efficiently than the bucket drives of last year and people will continue to remember that their spare change is essential to the Program's success.

Another thing to remember, especially while the marijuana famine is on, is that the bogus downer-dope pumped into our communities by the established forces represented by the Mafia and the C.I.A. continues to be an ever present danger to our people. The Tribal Council is calling on everyone to help the Rangers and keep shit dope out of the parks, and Drug Help workers will be on hand to deal with whatever bogus scenes that do develop. If anyone gets bummed out (or injured) just look for the Drug Help tent near the trees to the left of the stage. Even if you're not freaking, there'll be lots of good info on dope at the Drug Help tent that you might want to pick up on, so stop by and check it out.

Holding everything together, and most important of all, will be the Psychedelic Rangers. It's clear to everyone that the park concerts wouldn't happen without the support of the people -- and the people's Tribal Council asks you not to forget that the concerts CAN'T happen without the Psychedelic Rangers. And more Rangers are needed RIGHT NOW! Call 769-9405 and enlist your Sunday mind and bod in the people's righteous Ranger force. Help make the free music a reality and earn a few bucks in the process. Call NOW ! sisters and brothers !