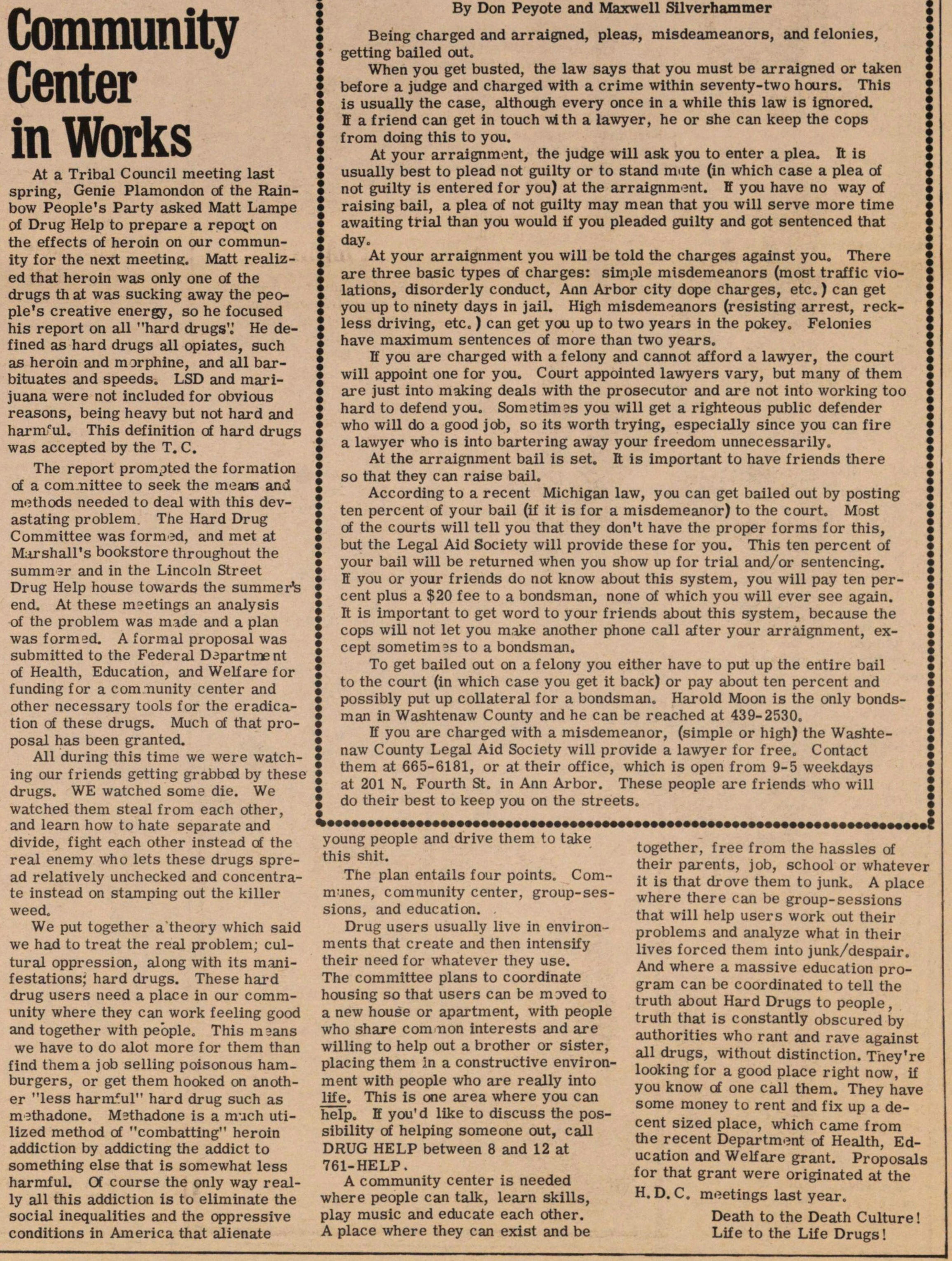 At a Tribal Council meeting last spring, Genie Plamondon of the Rainbow People's Party asked Matt Lampe Of Drug Help to prepare a report on the effects of heroin on our community for the next meeting. Matt realized that heroin was only one of the drugs th at was sucking away the people's creative energy, so he focused his report on all "hard drugs'.' He defined as hard drugs all opiates, such as heroin and marphine, and all barbituates and speeds. LSD and marijuana were not included for obvious reasons, being heavy but not hard and harmful. This definition of hard drugs was accepted by the T. C. The report prompted the formation of a com nittee to seek the means and methods needed to deal with this devastating problem. The Hard Drug Committee was formad, and met at Marshall's bookstore throughout the summ3r and in the Lincoln Street Drug Help house towards the suramerls end. At these msetings an analysis of the problem was made and a plan was formad. A formal proposal was submitted to the Federal Dapartment of Health, Education, and Welfare for funding for a com -nunity center and other necessary tools for the eradication of these drugs. Much of that proposal has been granted. All during this time we were watching our friends getting grabbed by these drugs. WE watched some die. We watched them steal f rom each other, and learn how to hate separate and divide, fight each other instead of the real enemy who Iets these drugs spread relatively unchecked and concéntrate instead on stamping out the killer weed. We put together a'theory which said we had to treat the real problem; cultural oppression, along with its manifestations; hard drugs. These hard drug users need a place in our community where they can work feeling good and together with pebple. This m 3ans we have to do alot more for them than find thema job selling poisonous hamburgers, or get them hooked on another "less harmful" hard drug such as mBthadone. Mathadone is a much utilized method of "combatting" heroin addiction by addicting the addict to something else that is somewhat less harmful. Of course the only way really all this addiction is to eliminate the social inequalities and the oppressive conditions in America that aliénate young people and drive them to take this shit. The plan entails four points. Communes, community center, group-sessions, and education. Drug users usually live in environments that créate and then intensify their need for whatever they use. The commlttee plans to coordínate housing so that users can be moved to a new house or apartment, with people who share com non interests and are willing to help out a brother or sister, placing them in a constructive environment with people who are really into life. This is one área where you can help. E you'd like to discuss the possibility of helping someone out, cali DRUG HELP between 8 and 12 at 761-HELP. A community center is needed where people can talk, learn skills, play music and edúcate each other. A place where they can exist and be together, free from the hassles of their parents, job, school or whatever it is that drove them to junk. A place where there can be group-sessions that will help users work out their problema and analyze what in their lives forced them into junkdespair. And where a massive education program can be coordinated to teil the truth about Hard Drugs to people , truth that is constantly obscured by authorities who rant and rave against all drugs, without distinction. They're looking for a good place right now, if you know cí one cali them. They have some money to rent and fix up a decent sized place, which carne from the recent Department of Health, Education and Welfare grant. Proposals for that grant were originated at the H.D.C, meetings last year. Death to the Death Culture ! Life to the Life Drugs !