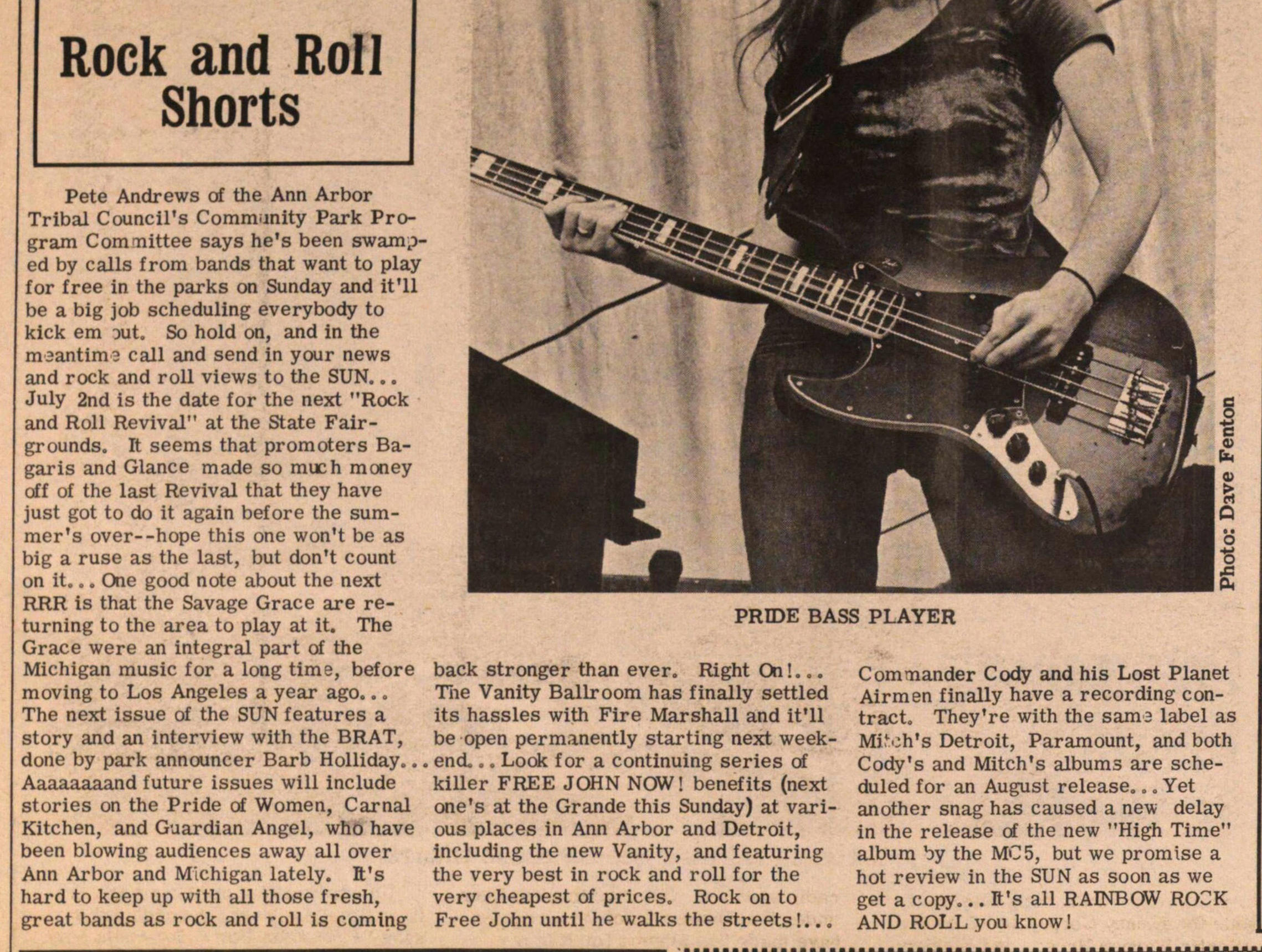 Pete Andrews oí the Ann Arbor Tribal Council's Community Park Program Conmittee says he's been swam.5ed by calis from bands that want to play for free in the parks on Sunday and it'll be a big job scheduling everybody to kick em }ut. So hold on, and in the m3antim3 cali and send in your news and rock and roll views to the SUN. . . July 2nd is the date for the next "Rock and Roll Revival" at the State Fairgrounds. It seems that promoters Bagaris and Glance made so much money off of the last Revival that they have just got to do it again before the summer's over--hope this one won't be as big a ruse as the last, but don't count on it. . . One good note about the next RRR is that the Savage Grace are returning to the area to play at it. The Grace were an integral part of the Michigan music for a long time, before moving to Los Angeles a year ago. . . The next issue of the SUN features a story and an interview with the BRAT, done by park announcer Barb Holliday. . . Aaaaaaaand future issues will include stories on the Pride of Women, Carnal Kitchen, and Guardian Angel, who have been blowing audiences away all over Ann Arbor and Michigan lately. ft's hard to keep up with all those fresh, great bands as rock and roll is coming back stronger than ever. Right On ! ... The Vanity Ballroom has finally settled its hassles with Fire Marshall and it'll be open permanently starting next weekend. . . Look f or a contlnuing series of killer FREE JOHN NOW! benefits (next one's at the Grande this Sunday) at various places in Ann Arbor and Detroit, including the new Vanity, and featuring the very best in rock and roll for the very cheapest of prices. Rock on to Free John until he walks the streets!. . . Commander Cody and his Lost Planet Airmen finally have a recording contract. They're with the sama label as Miíoh's Detroit, Paramount, and both Cody's and Mitch's albums are scheduled for an August release. . . Yet another snag has caused a new delay in the release cf the new "High Time" album by the MC5, but we promise a hot review in the SUN as soon as we get a copy. . . E's all RAINBOW ROCK AND ROLL you know! ■ ■ A ■ H ■ ■ A ■ fl ■ ■ ■ ■■■BSttBBBHB M M