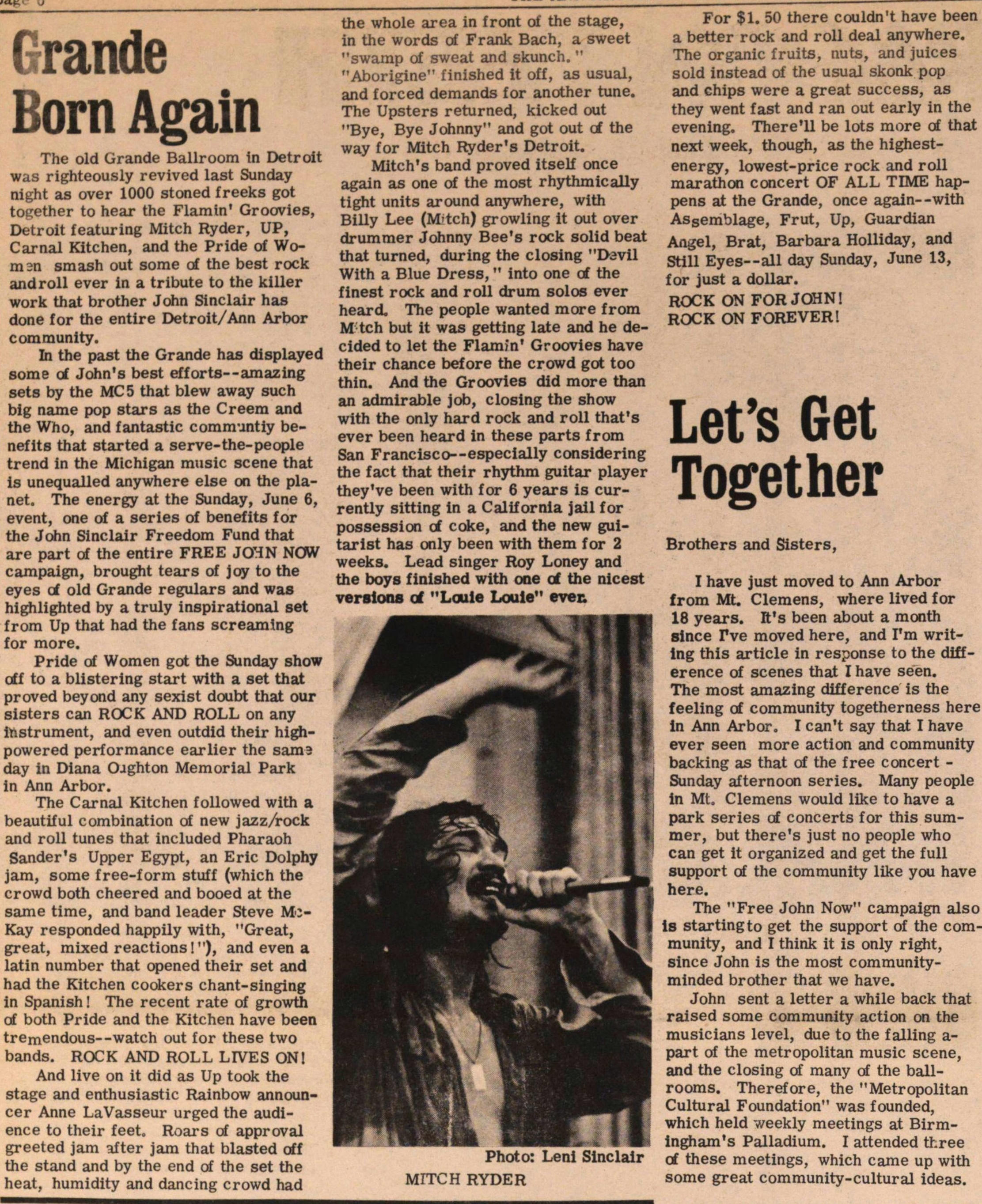 The old Grande Ballroom in Detroit was righteously revived last Sunday night as over 1000 stoned freeks got together to hear the Flamin' Groovies, Detroit featuring Mitch Ryder, UP, Carnal Kitchen, and the Pride of Womm smash out some oí the best rock androll ever in a tribute to the killer work that brother John Sinclair has done for the entire Detroit Ann Arbor community. In the past the Grande has displayed some of John's best efforts--amazing sets by the MC 5 that blew away such big name pop stars as the Creem and the Who, and fantastic communtiy benefits that started a serve-the-people trend in the Michigan music scène that is unequalled anywhere else on the planet. The energy at the Sunday, June 6, event, one of a series of benefits for the John Sinclair Freedom Fund that are part of the entire FREE JOHN NCW campaign, brought tears of joy to the eyes of old Grande regulars and was highlighted by a truly inspirational set from Up that had the fans screamlng for more. Pride of Women got the Sunday show off to a blistering start with a set that proved beyond any sexist doubt that our sisters can ROCK AND ROLL on any instrument, and even outdid their highpowered performance earlier the sam? day in Diana Oighton Memorial Park in Ann Arbor. The Carnal Kitchen followed with a beautiful combination of new jazzrock and roll tunes that included Pharaoh Sander's Upper Egypt, an Eric Dolphy jam, some free-form stuff (which the crowd both cheered and booed at the same time, and band leader Steve MoKay responded happily with, "Great, great, mixed reactions !"), and even a latin number that opened their set and had the Kitchen cookers chant-singing in Spanish ! The recent rate of growth of both Pride and the Kitchen have been tremendous - watch out for these two bands. ROCK AND ROLL LIVES ON1 And live on it did as Up took the stage and enthusiastic Rainbow announcer Anne LaVasseur urged the audience to their feet. Roars of approval greeted jam after jam that blasted off the stand and by the end of the set the heat, humidity and dancing crowd had the whole área in front of the stage, in the words of Frank Bach, a sweet "swamp of sweat and skunch. " "Aborigine" finished it off, as usual, and forced demands for another tune. The Upsters returned, kicked out "Bye, Bye Johnny" and got out of the way for Mitch Ryder's Detroit. Mitch's band proved itself once again as one of the most rhythmically tight units around anywhere, with Billy Lee (M'tch) growling it out over drummer Johnny Bee's rock solid beat that turned, during the c losing "Davil With a Blue Dress, " into one of the finest rock and roll drum solos ever heard. The people wanted more from M tch but it was getting late and he decided to let the Flamin' Groovies have their chance beíore the crowd got too thin. And the Groovies did more than an admirable job, closing the show with the only hard rock and roll that's ever been heard in these parts from San Francisco--especially considering the fact that their rhythm guitar player they've been with for 6 years is currently sitting in a California jail for possession of coke, and the new guitarist has only been with them for 2 weeks. Lead singer Roy Loney and the boys finished with one of the nicest verslons of "Loule Loule" even For $1. 50 there couldn't have been a better rock and roll deal anywhere. The organic iruits, nuts, and juices sold instead of the usual skonk pop and chips were a great success, as they went fast and ran out early in the evening. There'll be lots more of that next week, though, as the highestenergy, lowest-price rock and roll marathon concert OF ALL TIME happens at the Grande, once again--with Assemblage, Frut, Up, Guardian Angel, Brat, Barbara Holliday, and Stlll Eyes--all day Sunday, June 13, for just a dollar. ROCK ON FOR JOHN! ROCK ON FOREVER!