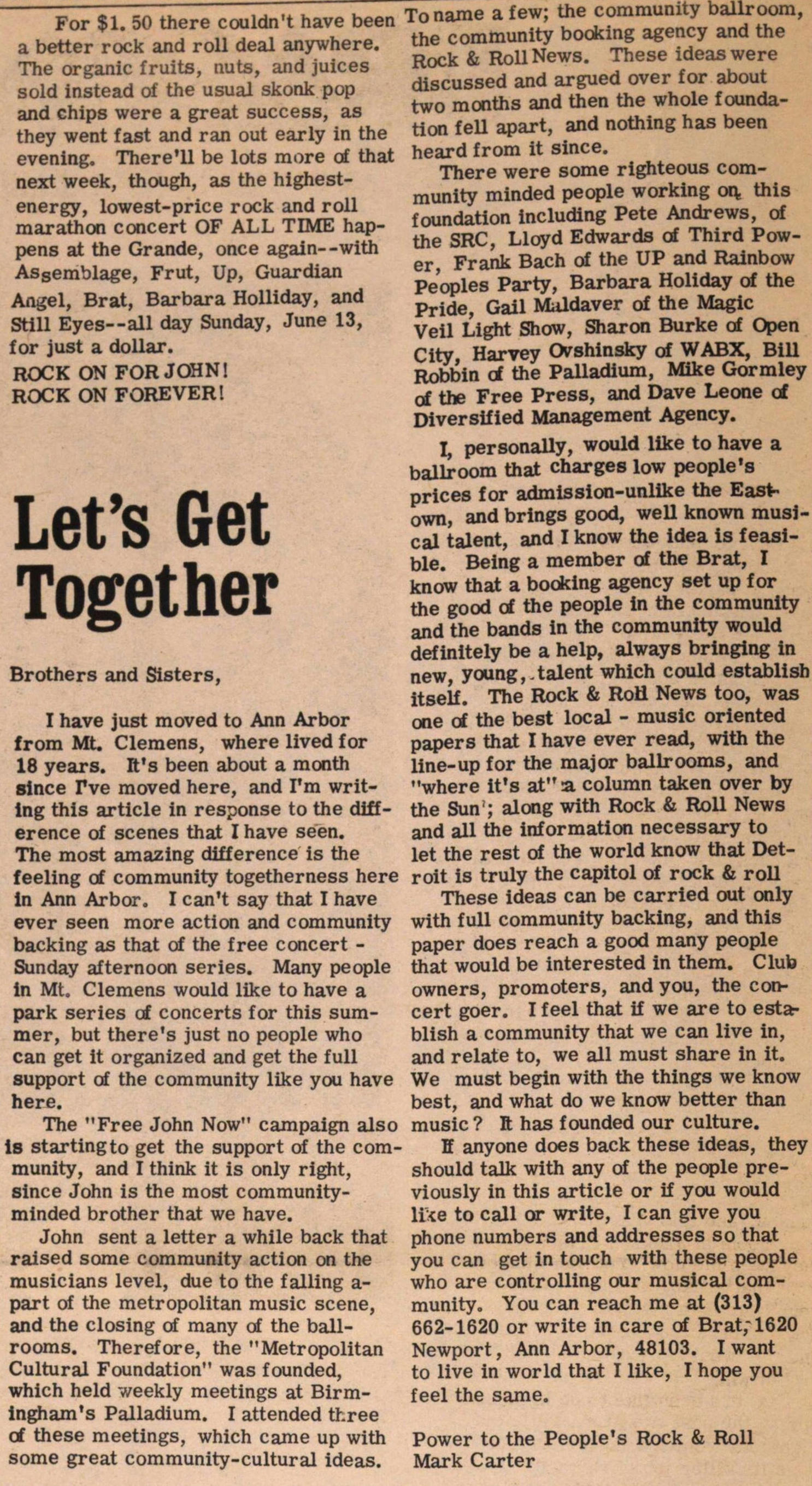 Brothers and Sisters, I have just moved to Ann Arbor from Mt. Clemens, where lived for 18 years. R's been about a month slnce Tve moved here, and I'm writing this article in response to the dlfference of scènes that I have seen. The most amazing difference is the feeling of community togetherness here in Ann Arbor. I can't say that I have ever seen more action and community backing as that of the free concert - Sunday afternoon series. Many people in Mt. Clemens would like to have a park series of concerts for this summer, but there's just no people who can get it organized and get the full support of the community like you have here. The "Free John Now" campaign als o is startingto get the support of the community, and I think it is only right, since John is the most communityminded brother that we have. John sent a letter a while back that raised some community action on the musicians level, due to the f alling apart of the metropolitan music scène, and the closing of many af the ballrooms. Therefore, the "Metropolitan Cultural Foundation" was founded, which held weekly meetings at Birmingham's Palladium. I attended three of these meetings, which carne up with some great community-cultural ideas. Toname a few; the community ballroom, the community booking agency and the Rock & RollNews. These ideas were discussed and argued over for about two months and then the whole foundation feil apart, and nothing has been heard from it since. There were some righteous community minded people working on, this foundation including Pete Andrews, of the SRC, Lloyd Edwards of Third Power, Frank Bach of the UP and Rainbow Peoples Party, Barbara Holiday of the Pride, Gail Maldaver of the Magie Veil Light Show, Sharon Burke af Open City Harvey Ovshinsky of WABX, Bill Robbin of the Palladium, Mike Gormley af the Free Press, and Dave Leone of Diversified Management Agency. I, personally, would like to have a ballroom that charges low people 's prices for admission-unlike the Eastown, and brings good, well known musical talent, and I know the idea is f easible. Being a member af the Brat, I know that a booking agency set up for the good of the people in the community and the bands in the community would def initely be a help, always bringing in new, young, -talent which could establish itseif . The Rock & Roü News too, was one of the best local - music oriented papers that I have ever read, with the line-up for the major ballrooms, and "where it's at" a column taken over by the Sun'; along with Rock & Roll News and all the information necessary to let the rest of the world know that Detroit is truly the capitol of rock & roll These ideas can be carried out only with full community backing, and this paper does reach a good many people that would be interested in them. Club owners, promoters, and you, the concert goer. I f eel that if we are to establish a community that we can live in, and relate to, we all must share in it. We must begin with the things we know best, and what do we know better than music ? ft has f ounded our culture. E anyone does back these ideas, they should talk with any of the people previously in this article or if you would lixe to cali or write, I can give you phone numbers and addresses so that you can get in touch with these people who are controlling our musical community. You can reach me at (313) 662-1620 or write in care of 1620 Newport , Ann Arbor, 48103. I want to live in world that I like, I hope you feel the same. Power to the People's Rock & Roll Mark Carter