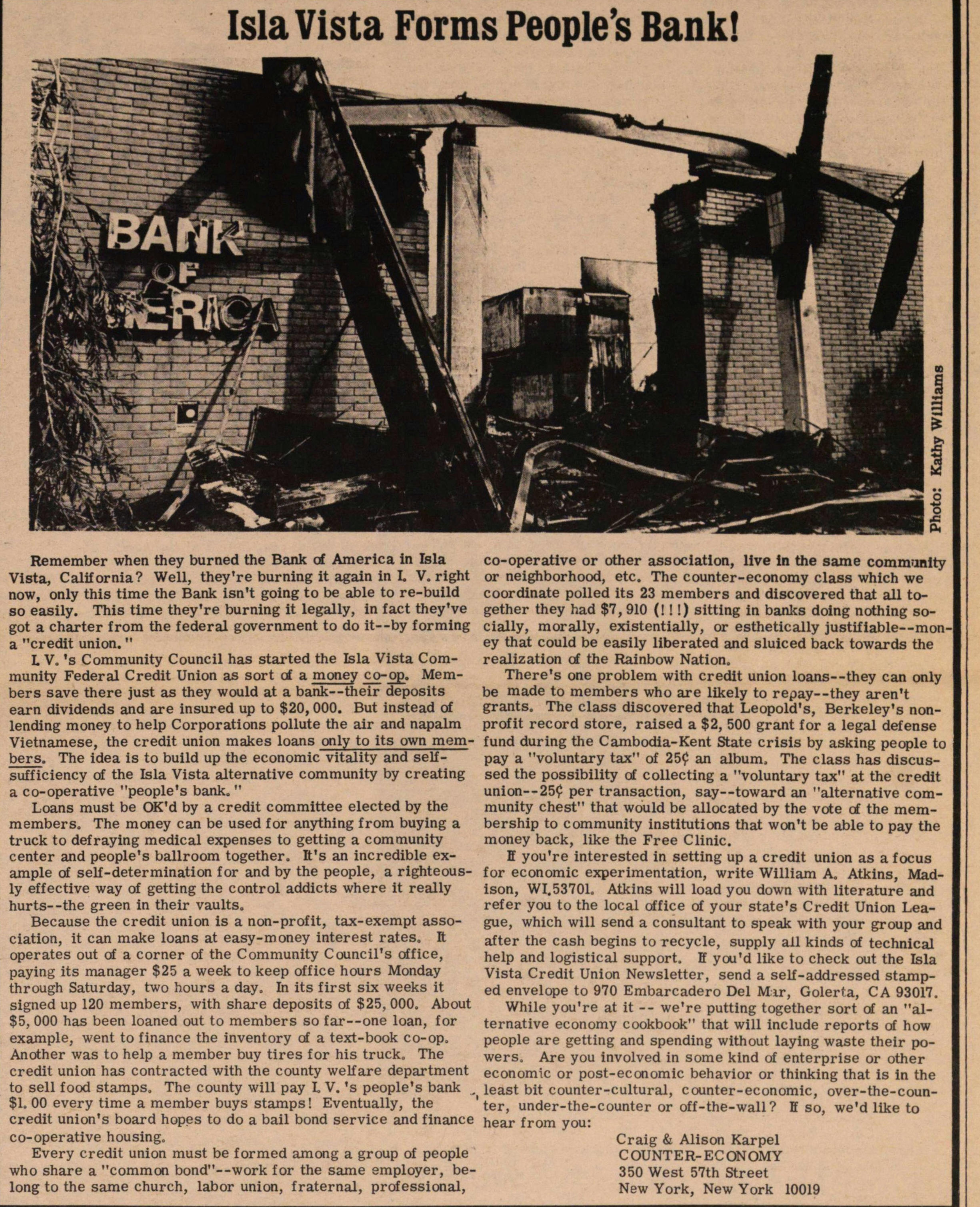 Remember when they burned the Bank of America in Isla Vista, California? Well, they're burning it again in I. V. right now, only this time the Bank isn't going to be able to re-build so easily. This time they're burning it legally, in fact they've got a charter from the federal government to do it--by forming a "credit union. " L V. 's Community Council has started the Isla Vista Community Federal Credit Union as sort oí a money co-op. Members save there just as they would at a bank--their deposits earn dividends and are insured up to $20, 000. But instead of lending money to help Corporations pollute the air and napalm Vietnamese, the credit union makes loans only to its own members. The idea is to build up the economie vitality and selfsufficiency of the Isla Vista alternative community by creating a co-operative "people's bank." Loans must be OK'd by a credit committee elected by the members. The money can be used for anything from buying a truck to defraying medical expenses to getting a community center and people's ballroom together. It's an incredible example of self-determination for and by the people, a righteously effective way of getting the control addicts where it really hurts--the green in their vaults. Because the credit union is a non-profit, tax-exempt association, it can make loans at easy-money interest rates. K operates out of a corner of the Community Council's office, paying its manager $25 a week to keep office hours Monday through Saturday, two hours a day. In its first six weeks it signed up 120 members, with share deposits of $25, 000. About $5, 000 has been loaned out to members so far - one loan, for example, went to finance the inventory of a text-book co-op. Another was to help a member buy tires for his truck. The credit union has contracted with the county welfare department to sell food stamps, The county will pay L V. 's people's bank $1. 00 every time a member buys stamps! Eventually, the credit union's board hopes to do a bail bond service and finance co-operative housing, Every credit union must be formed among a group of people who share a "common bond" - work for the same employer, belong to the same church, labor union, fraternal, professional, co-operative or other association, live In the same community or neighborhood, etc. The counter-economy class which we coordínate polled lts 23 members and discovered that all together they had $7, 910 (!!!) sitting in banks dolng nothing socially, morally, existentially, or esthetically justifiable- money that could be easily liberated and sluiced back towards the realization of the Rainbow Nation. There's one problem with credit unión loans--they can only be made to members who are likely to repay--they aren't grants. The class discovered that Leopold's, Berkeley's nonprofit record store, raised a $2, 500 grant for a legal defense fund during the Cambodia-Kent State crisis by asking people to pay a "voluntary tax" of 25? an album, The class has discussed the possibility of collecting a "voluntary tax" at the credit union--25L per transaction, say--toward an "alternative community chest" that would be allocated by the vote of the membership to community institutions that won't be able to pay the money back, like the Free C linie. ff you're interested in setting up a credit unión as a focus for economie experimentation, write William A. Atkins, Madison, WI.53701. Atkins will load you down with literature and refer you to the local office of your state's Credit Union League, which will send a consultant to speak with your group and after the cash begins to recycle, supply all kinds of technical help and logistical support, ff you'd like to check out the Isla Vista Credit Union Newsletter, send a self-addressed stamped envelope to 970 Embarcadero Del Mir, Golerta, CA 93017. While you're at it -- we're putting together sort of an "alternative economy cookbook" that will include reports of how people are getting and spending without laying waste their powers. Are you involved in some kind of enterprise or other economie or post-economic behavior or thinking that is in the least bit counter-cultural, counter-economie, over-the-counter, under-the-counter or off-the-wall? ff so, we'd like to hear from you: Craig & Alison Karpel COUNTER-ECONOMY 350 West 57th Street New York, New York 10019