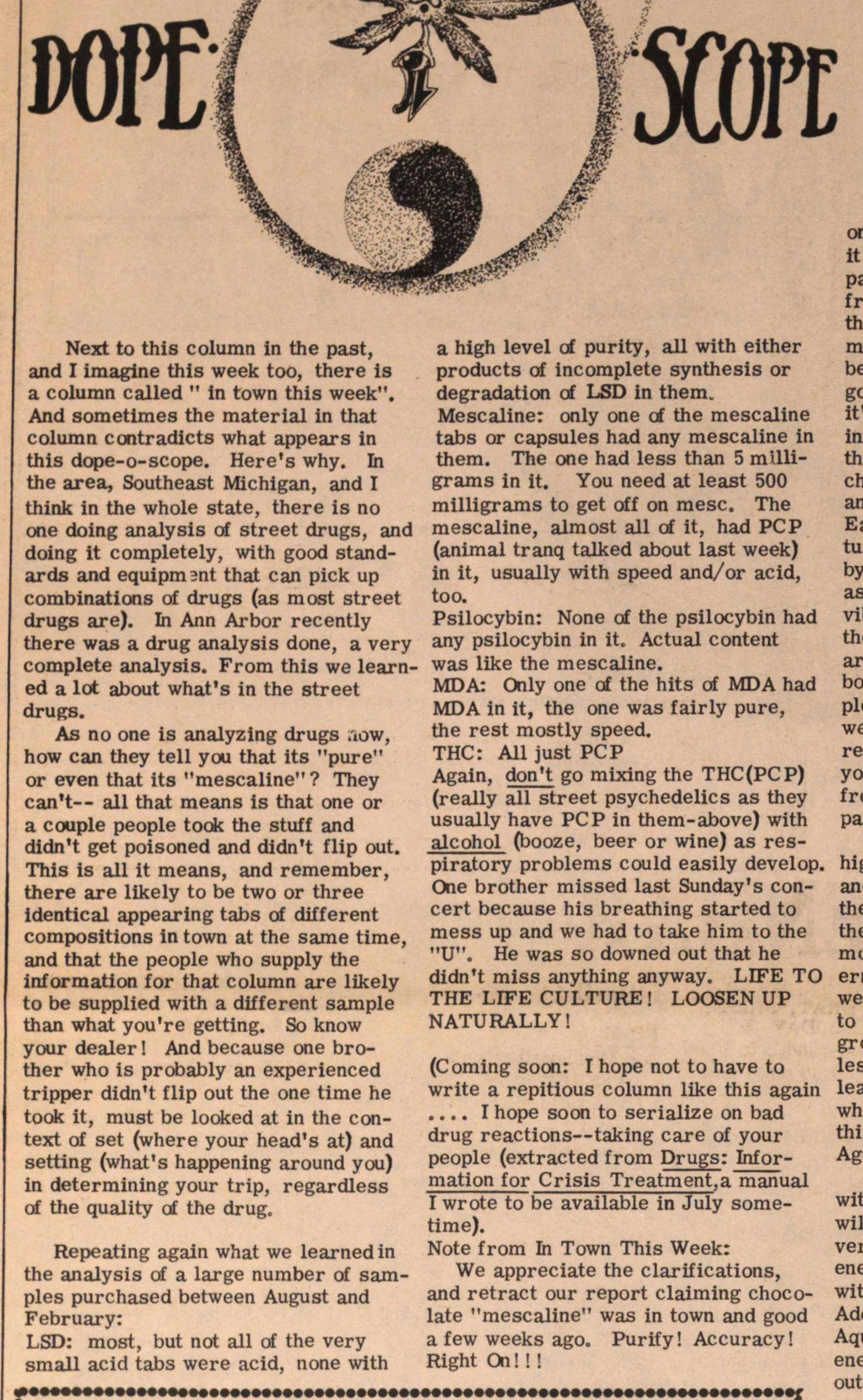 Next to this column in the past, and I imagine this week too, there is a column called " in town this week". And sometimes the material in that column contradicts what appears in this dope-o-scope. Here's why. In the área, Southeast Michigan, and I think in the whole state, there is no one doing analysis of street drugs, and doing it completely, with good standar ds and equipmit that can piek up combinations of drugs (as most street drugs are). Li Ann Arbor recently there was a drug analysis done, a very complete analysis. From this we learned a lot about what's in the street drugs. As no one is analyzing drugs aow, how can they teil you that its "pure" or even that its "mescaline" ? They can't - all that means is that one or a couple people took the stuff and didn't get poisoned and didn't flip out. This is all it means, and remember, there are likely to be two or three idéntica! appearing tabs of different compositions in town at the same time, and that the people who supply the inf ormation for that column are likely to be supplied with a different sample than what you're getting. So know your dealer ! And because one brother who is probably an experienced tripper didn't flip out the one time he took it, must be looked at in the context of set (where your head's at) and setting (what's happening around you) in determining your trip, regardless of the quality of the drug. Repeating again what we learned in the analysis of a large number of samples purchased between August and February: LSD: most, but not all of the very small acid tabs were acid, none with a high level cf purity, all with either products of incomplete synthesis or degradation af LSD in thenu Mescaline: only one cí the mescaline tabs ar capsules had any mescaline in them. The one had less than 5 mllligrams in it. You need at least 500 milligrams to get off on mese. The mescaline, almost all oí it, had PCP (animal tranq talked about last week) in it, usually with speed andor acid, too. Psilocybin: None of the psilocybin had any psilocybin in it. Actual content was like the mescaline. MDA: Only one of the hits of MDA had MDA in it, the one was fairly pure, the rest mostly speed. THC: All just PCP Again, don 't go mixing the THC(PCP) (really all street psychedelics as they usually have PCP in them-above) with alcohol (booze, beer or wine) as respiratory problems could easily develop. One brother missed last Sunday's concert because his breathing started to mess up and we had to take him to the "U". He was so downed out that he didn't miss anything anyway. LIFE TO THE LIFE CULTURE ! LOOSEN UP NATU RALLY! (Coming soon: I hope not to have to write a repitious column like this again .... I hope soon to serialize on bad drug reactions - taking care of your people (extracted f rom Drugs: Information for Crisis Treatment,a manual I wrote to be available in July sometime). Note from In Town This Week: We appreciate the clarifications, and retract our report claiming chocolate "mescaline" was in town and good a few weeks ago. Purif y ! Accuracy ! Right On ! ! !