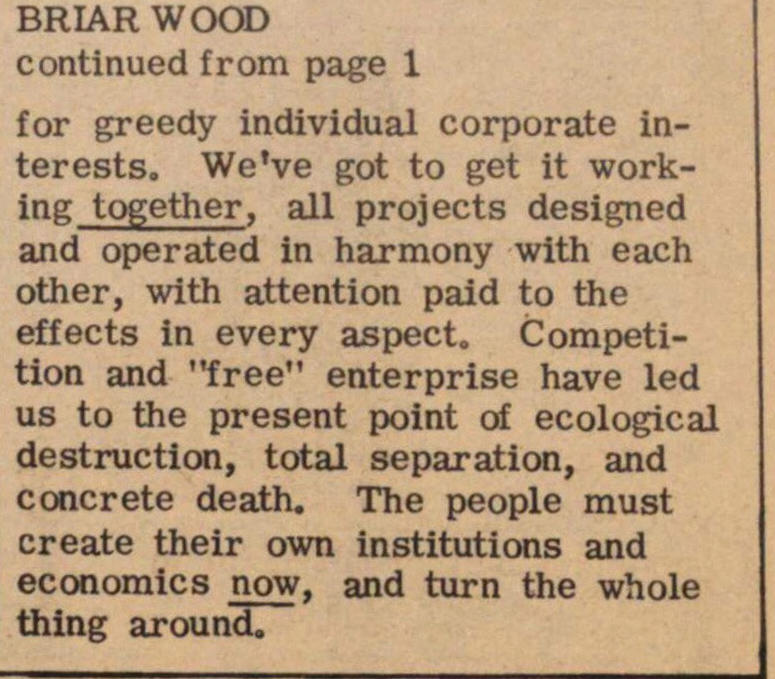 The cement money-land Briarwood Shopping Center was approved by the City Council servants af cement-death by a vote of 6 to 4 last week.

Briarwood, for those of you who haven't been following the controversy, will be located at State Street and 1-94. ft will be the largest shopping center of its kind in the area. The project involves 100 acres of green, rolling hills with trees into a huge, flat asphalt parking lot with a concrete slab of stores in the middle, and a few thin rows of trees added on at the last minute to appease critics. The idea counters the city's adopted Comprehensive Plan, which was designed to avoid the problems of urban sprawl and inner-city decay which Briarwood will intensify. The Council's decision ignores the lack of a mass transit provision to go along with the center, which will encourage more automobile use and a consequent increase in noxious fumes.

Dick Ahern of Oecumensa of Washtenaw, an organization dedicated to achieving a balance between economics and the state of the planet, and William Kopper of the Ecology Center both opposed the shopping center. Kopper appealed to Council to no avail on the night of the vote saying he wished the councilmen would not "jeopardize our children's future. . . just so someone can make a buck." Showing slides of two other shopping centers built by Taubman Co., developer of Briarwood, Kopper called them "factory-type shopping centers" and "seas of asphalt." America the Beautiful.

In making this decision to tear down the grass and the trees in order to put up more junk, the city council of Ann Arbor ignored the wishes of Ann Arborites represented by the Citizens Association for Area planning, the League of Women Voters, U of M and High School chapters of Enact, the Ecology Center and Environmental Council and other groups.

They did not ignore the increased profit possibility involved in Briarwood. Councilman Don Faber abstained from voting because of a conflict of interest: he planned to build a store at the proposed site and so too much "personal" interest was at stake. Another councilman was asked to abstain for the same reason but refused, which shows you where things are really at.

Briarwood will supposedly increase employment in the area and provide increased tax revenue. That is if it doesn't simply make the central business district into an uninhabited vacuum, everyone taking their business out to the 'country'. Or if it doesn't increase the local population past the point the city can handle even with increased revenues. The city does need money -- why can't the money being used for building Briarwood go to alleviate the city's deficit? Why can't the incredible sums of money spent on bombs and the space program be used for the people? Monetary crises like the city's current one will continue and get worse -- until we have a socialist economy based on utilization of all resources for the collective benefit of all people, and not on the accumulation of profit (surplus value Marx called it) (continued on page 3)

for greedy individual corporate interests. We've got to get it working together, all projects designed and operated in harmony with each other, with attention paid to the effects in every aspect. Competition and "free" enterprise have led us to the present point of ecological destruction, total separation, and concrete death. The people must create their own institutions and economics now, and turn the whole thing around.