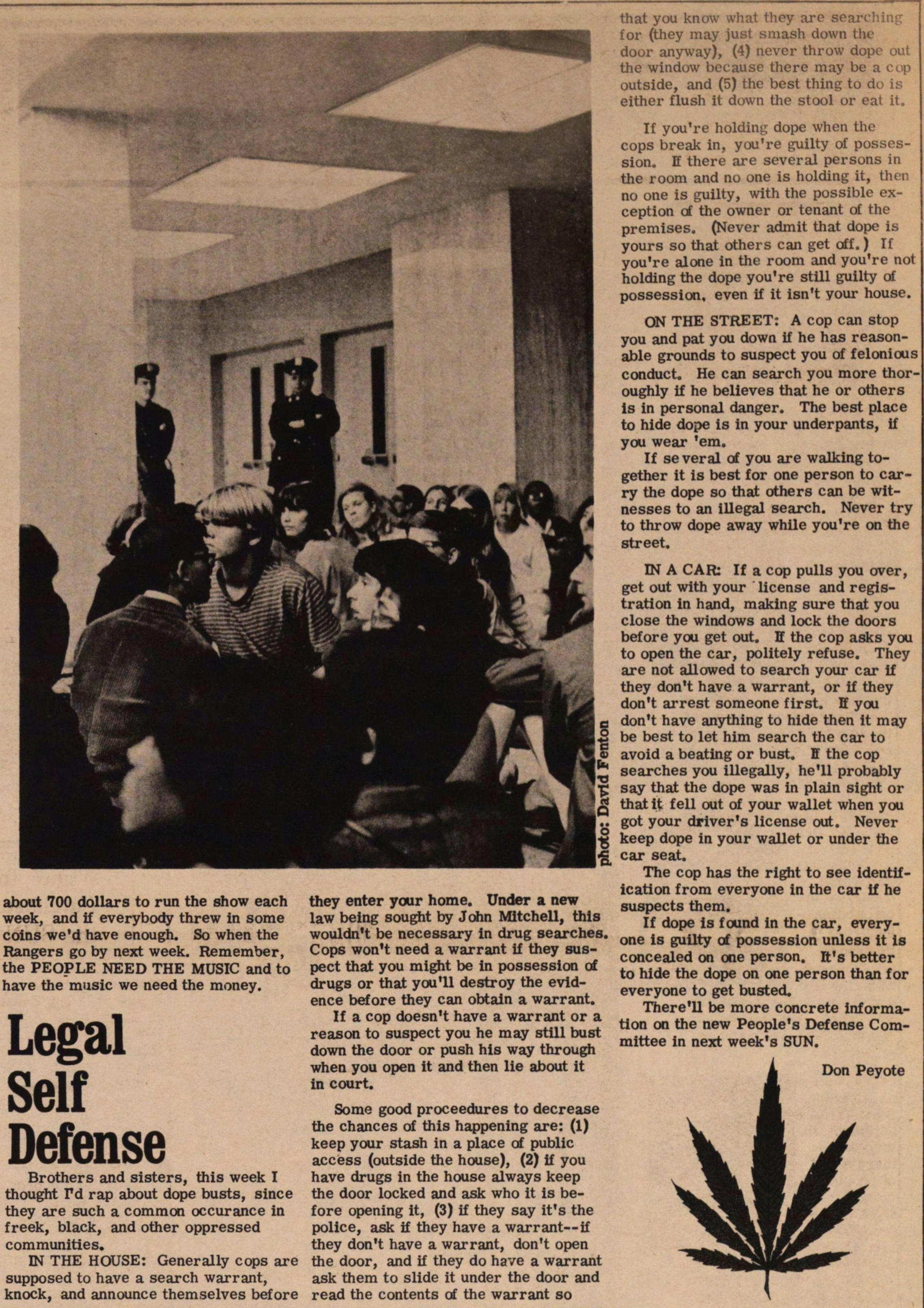 Brothers and sisters, this week I thought I'd rap about dope busts, since they are such a common occurrence in freek, black, and other oppressed communities.

IN THE HOUSE: Generally cops are supposed to have a search warrant, knock, and announce themselves before they enter your home. Under a new law being sought by John Mltchell, this wouldn't be necessary in drug searches. Cops won't need a warrant if they suspect that you might be in possession of drugs or that you'll destroy the evidence before they can obtain a warrant.

If a cop doesn't have a warrant or a reason to suspect you he may still bust down the door or push his way through when you open it and then lie about it in court.

Some good procedures to decrease the chances of this happening are: (1) keep your stash in a place of public access (outside the house), (2) if you have drugs in the house always keep the door locked and ask who it is before opening it, (3) if they say it's the police, ask if they have a warrant -- if they don't have a warrant, don't open the door, and if they do have a warrant ask them to slide it under the door and read the contents of the warrant so that you know what they are searching for (they may just smash down the door anyway), (4) never throw dope out the window because there may be a cop outside, and (5) the best thing to do is either flush it down the stool or eat it.

If you're holding dope when the cops break in, you're guilty of possession. ff there are several persons in the room and no one is holding it, then no one is guilty, with the possible exception of the owner or tenant of the premises. (Never admit that dope is yours so that others can get off.) If you're alone in the room and you're not holding the dope you're still guilty of possession, even if it isn't your house.

ON THE STREET: A cop can stop you and pat you down if he has reasonable grounds to suspect you of felonious conduct. He can search you more thoroughly If he believes that he or others is in personal danger. The best place to hide dope is in your underpants, if you wear 'em.

If several of you are walking together it is best for one person to carry the dope so that others can be witnesses to an illegal search. Never try to throw dope away while you're on the street.

IN A CAR: If a cop pulls you over, get out with your license and registration in hand, making sure that you close the Windows and lock the doors before you get out. If the cop asks you to open the car, politely refuse. They are not allowed to search your car if they don't have a warrant, or if they don't arrest someone first. If you don't have anything to hide then It may be best to let him search the car to avoid a beating or bust. If the cop searches you illegally, he'll probably say that the dope was in plain sight or that it fell out of your wallet when you got your driver's license out. Never keep dope in your wallet or under the car seat.

The cop has the right to see Identification from everyone in the car if he suspects them.

If dope is found in the car, everyone is guilty of possession unless it is concealed on one person. It's better to hide the dope on one person than for everyone to get busted.

There'll be more concrete Information on the new People's Defense Committee in next week's SUN.