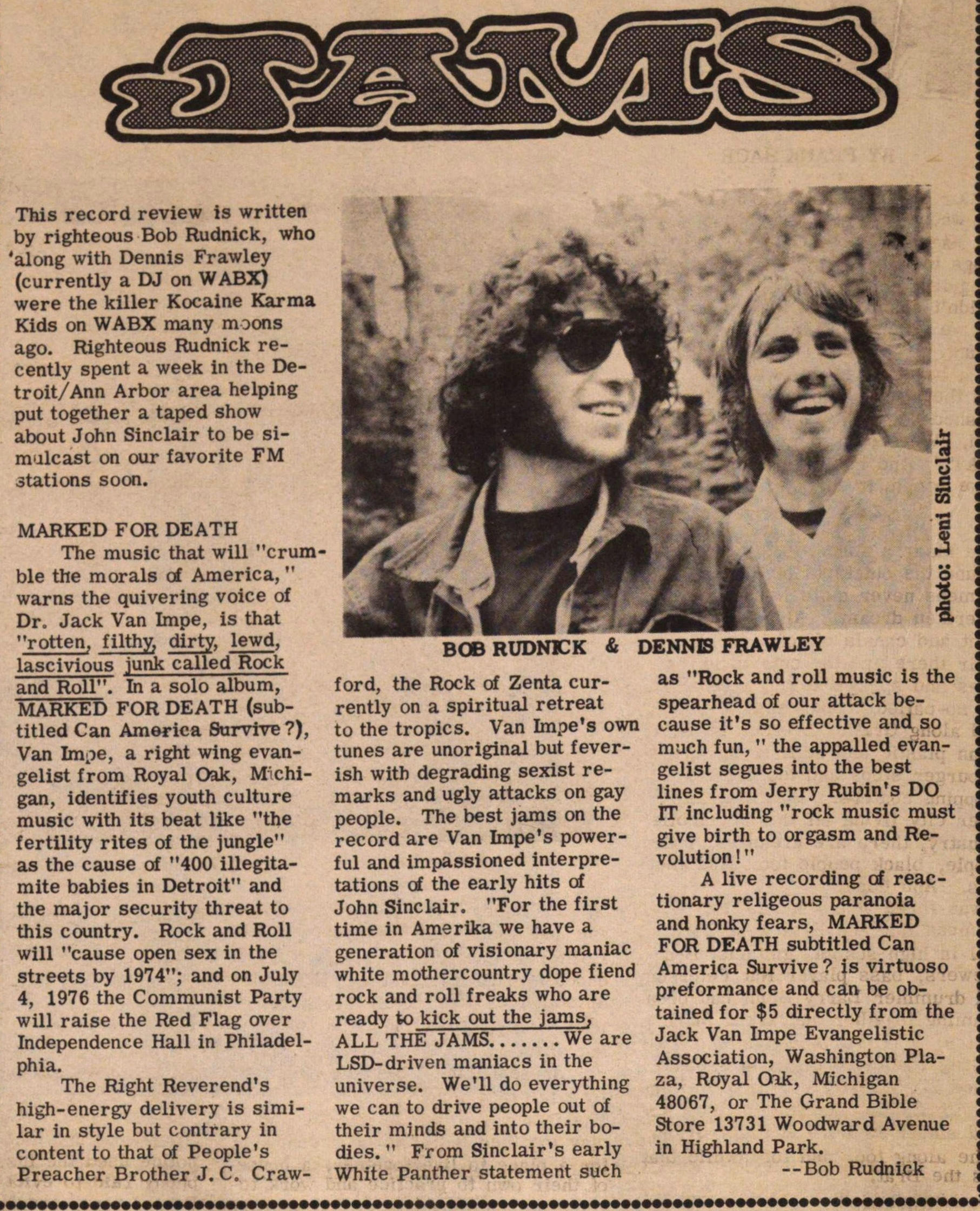 This record review is written by righteous Bob Rudnick, who along with Dennis Frawley (currently a DJ on WABX) were the killer Kocaine Karma Kids on WABX many moons ago. Righteous Rudnick recently spent a week in the Detroit / Ann Arbor area helping put together a taped show about John Sinclair to be simulcast on our favorite FM stations soon.

The music that will "crumble the morais of America," warns the quivering voice of Dr. Jack Van Impe, is that "rotten, filthy, dirty, lewd, lascivious junk called Rock and Roll". In a solo album, MARKED FOR DEATH (subtitled Can America Survive ?), Van Impe, a right wing evangelist from Royal Oak, Michigan, identifies youth culture music with its beat like "the fertility rites of the jungle" as the cause of "400 illegitimate babies in Detroit" and the major security threat to this country. Rock and Roll will "cause open sex in the streets by 1974"; and on July 4, 1976 the Communist Party will raise the Red Flag over Independence Hall in Philadelphia.

The Right Reverend's high-energy delivery is similar in style but contrary in content to that of People's Preacher Brother J. C. Crawford, the Rock of Zenta currently on a spiritual retreat to the tropics. Van Impe's own tunes are unoriginal but feverish with degrading sexist remarks and ugly attacks on gay people. The best jams on the record are Van Impe's powerful and impassioned interpretations of the early hits of John Sinclair. "For the first time in Amerika we have a generation of visionary maniac white mothercountry dope fiend rock and roll freaks who are ready to kick out the jams, ALL THE JAMS...We are LSD-driven maniacs in the universe. We'll do everything we can to drive people out of their minds and into their bodies. " From Sinclair's early White Panther statement such as "Rock and roll music is the spearhead of our attack because it's so effective and so much fun," the appalled evangelist segues into the best lines from Jerry Rubin's DO IT including "rock music must give birth to orgasm and Revolution!"