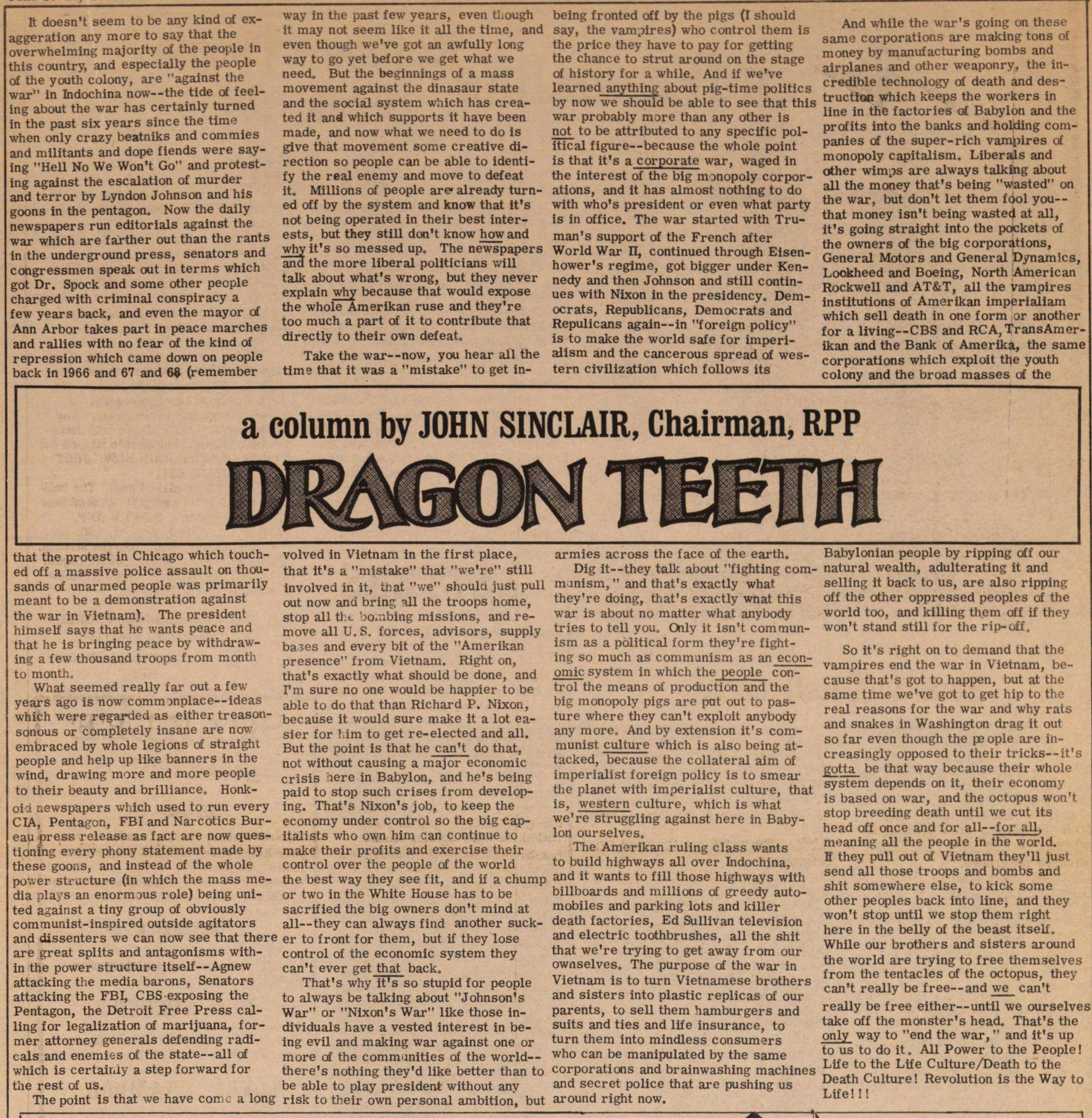 It doesn't seem to be any kind of exaggeration any more to say that the overwhelming majority of the people in this country, and especially the people of the youth colony, are "against the war" in Indochina now--the tide of feeling about the war has certainly turned in the past six years since the time when only crazy beatniks and commies and militants and dope fiends were saying "Hell No We Won't Go" and protesting against the escalation of murder and terror by Lyndon Johnson and his goons in the pentagon. Now the daily newspapers run editorials against the war which are farther out than the rants in the underground press, senators and congressmen speak out in terms which got Dr. Spock and some other people charged with criminal conspiracy a few years back, and even the mayor of Ann Arbor takes part in peace marches and rallies with no fear of the kind of repression which came down on people back in 1966 and 67 and 68 (remember

that the protest in Chicago which touched off a massive police assault on thousands of unarmed people was primarily meant to be a demonstration against the war in Vietnam). The president himself says that he wants peace and that he is bringing peace by withdrawing a few thousand troops from month to month.

What seemed really far out a few years ago is now commonplace--ideas which were regarded as either treasonous or completely insane are now embraced by whole legions of straight people and help up like banners in the wind, drawing more and more people to their beauty and brilliance. Honkoid newspapers which used to run every CIA, Pentagon, FBI and Narcotics Bureau press release as fact are now questioning every phony statement made by these goons, and instead of the whole power structure (in which the mass media plays an enormous) being united against a tiny group of obviously communist-inspired outside agitators and dissenters we can now see that there are great splits and antagonisms within the power structure itself -- Agnew attacking the media barons, Senators attacking the FBI, CBS exposing the Pentagon, the Detroit Free Press calling for legalization of marijuana, former attorney generals defending radicals and enemies of the state -- all of which is certainly a step forward for the rest of us.

The point is that we have come a long

way in the past few years, even though it may not seem like it all the time, and even though we've got an awfully long way to go yet before we get what we need. But the beginnings of a mass movement against the dinosaur state and the social system which has created it and which supports it have been made, and now what we need to do is give that movement some creative direction so people can be able to identify the real enemy and move to defeat it. Millions of people are already turned off by the system and know that it's not being operated in their best interests, but they still don't know how and why it's so messed up. The newspapers and the more liberal politicians will talk about what's wrong, but they never explain why because that would expose the whole Amerikan ruse and they're too much a part of it to contribute that directly to their own defeat.

Take the war -- now, you hear all the time that it was a "mistake" to get in-

volved in Vietnam in the first place, that it's a "mistake" that "we're" still involved in it, that "we" should just pull out now and bring all the troops home, stop all the bombing missions, and remove all U.S. forces, advisors, supply bases and every bit of the "Amerikan presence" from Vietnam. Right on, that's exactly what should be done, and I'm sure no one would be happier to be able to do that than Richard P. Nixon, because it would sure make it a lot easier for him to get re-elected and all. But the point is that he can't do that, not without causing a major economic crisis here in Babylon, and he's being paid to stop such crises from developing. That's Nixon's job, to keep the economy under control so the big capitalists who own him can continue to make their profits and exercise their control over the people of the world the best way they see fit, and if a chump or two in the White House has to be sacrificed the big owners don't mind at all -- they can always find another sucker to front for them, but if they lose control of the economic system they can't ever get that back.

That's why it's so stupid for people to always be talking about "Johnson's War" or "Nixon's War" like those individuals have a vested interest in being evil and making war against one or more of the communities of the world -- there's nothing they'd like better than to be able to play president without any risk to their own personal ambition, but

being fronted off by the pigs (I should say, the vampires) who control them is the price they have to pay for getting the chance to strut around on the stage of history for a while. And if we've learned anything about pig-time politics by now we should be able to see that this war probably more than any other is not to be attributed to any specific political figure -- because the whole point is that it's a corporate war, waged in the interest of the big monopoly corporations, and it has almost nothing to do with who's president or even what party is in office. The war started with Truman's support of the French after World War II, continued through Eisenhower's regime, got bigger under Kennedy and then Johnson and still continues with Nixon in the presidency. Democrats, Republicans, Democrats and Republicans again -- in "foreign policy" is to make the world safe for imperialism and the cancerous spread of western civilization which follows its

armies across the face of the earth.

Dig it -- they talk about "fighting communism," and that's exactly what they're doing, that's exactly what this war is about no matter what anybody tries to tell you. Only it isn't communism as a political form they're fighting so much as communism as an economic system in which the people control the means of production and the big monopoly pigs are put out to pasture where they can't exploit anybody any more. And by extension it's communist culture which is also being attacked, because the collateral aim of imperialist foreign policy is to smear the planet with imperialist culture, that is, western culture, which is what we're struggling against here in BabyIon ourselves.

The Amerikan ruling class wants to build highways all over Indochina, , and it wants to fill those highways with billboards and millions of greedy automobiles and parking lots and killer death factories, Ed Sullivan television and electric toothbrushes, all the shit that we're trying to get away from our ownselves. The purpose of the war in Vietnam is to turn Vietnamese brothers and sisters into plastic replicas of our parents, to sell them hamburgers and suits and ties and life insurance, to turn them into mindless consumers who can be manipulated by the same corporations and brainwashing machines and secret police that are pushing us around right now. .

And while the war's going on these same corporations are making tons of money by manufacturing bombs and airplanes and other weaponry, the incredible technology of death and destruction which keeps the workers in line in the factories of Babylon and the profits into the banks and holding companies of the super rich vampires of monopoly capitalism. Liberals and other wimps are always talking about all the money that's being "wasted" on the war, but don't let them fool you -- that money isn't being wasted at all, it's going straight into the pockets of the owners of the big corporations, General Motors and General Dynamics, Lockheed and Boeing, North American Rockwell and AT&T, all the vampires institutions of Amerikan imperialism which sell death in one form or another for a living -- CBS and RCA, TransAmerikan and the Bank of Amerika, the same corporations which exploit the youth colony and the broad masses of the

Babylonian people by ripping off our natural wealth, adulterating it and selling it back to us, are also ripping off the other oppressed peoples of the world too, and killing them off if they won't stand still for the rip-off.

So it's right on to demand that the vampires end the war in Vietnam, because that's got to happen, but at the same time we've got to get hip to the real reasons for the war and why rats and snakes in Washington drag it out so far even though the people are increasingly opposed to their tricks -- it's gotta be that way because their whole system depends on it, their economy is based on war, and the octopus won't stop breeding death until we cut its head off once and for all -- for all, meaning all the people in the world. If they pull out of Vietnam they'll just send all those troops and bombs and shit somewhere else, to kick some other peoples back into line, and they won't stop until we stop them right here in the belly of the beast itself. While our brothers and sisters around the world are trying to free themselves from the tentacles of the octopus, they can't really be free -- and we can't really be free either -- until we ourselves take off the monster's head. That's the only way to "end the war, " and it's up to us to do it. All Power to the People ! Life to the Life Culture/Death to the Death Culture! Revolution is the Way to Life!!!