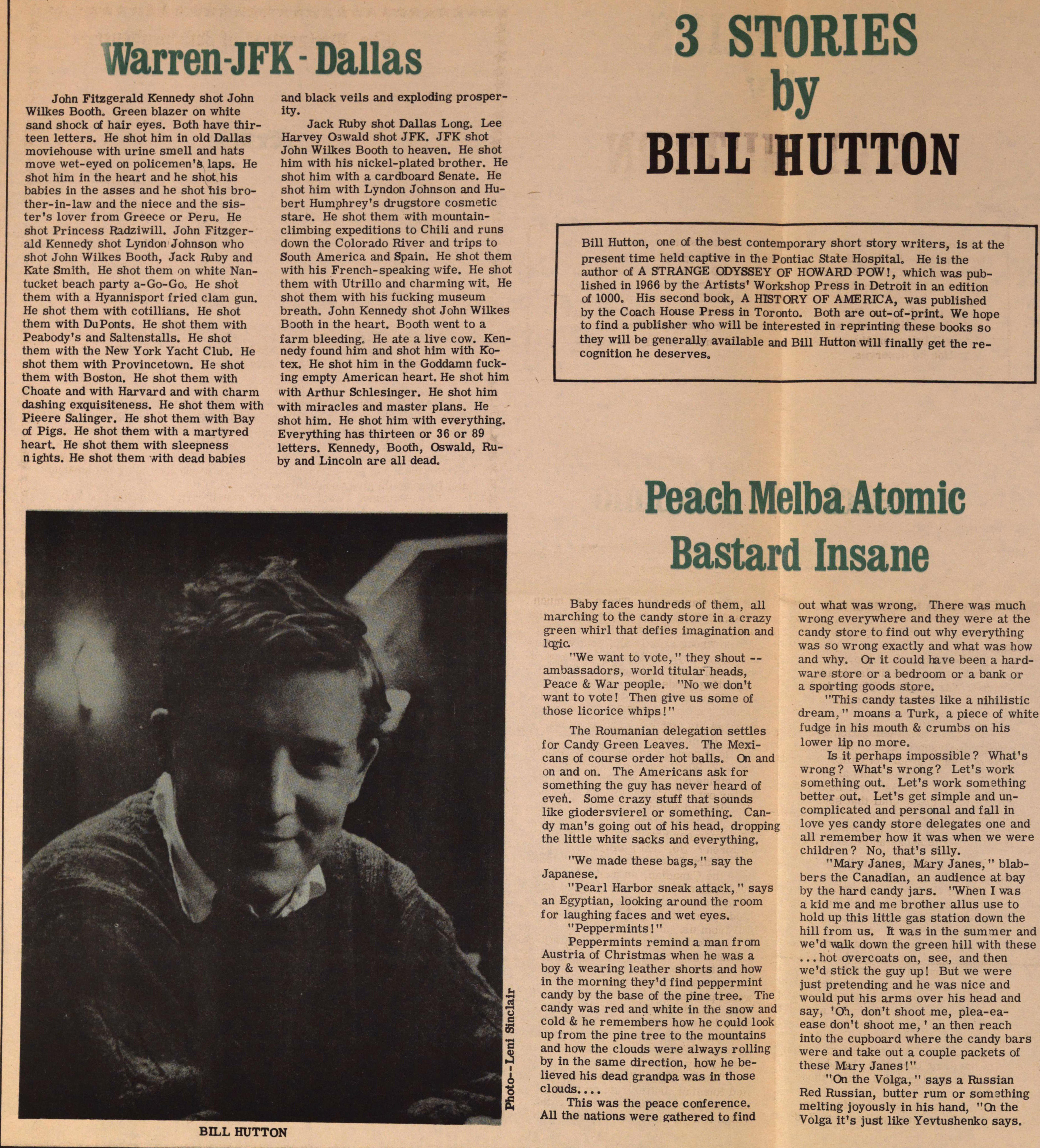 and black veils and exploding prosperity.

Bill Hutton, one of the best contemporary short story writers, is at the present time held captive in the Pontiac State Hospital. He is the author of A STRANGE ODYSSEY OF HOWARD POW!, which was published in 1966 by the Artists' Workshop Press in Detroit in an edition of 1000. His second book, A HISTORY OF AMERICA, was published by the Coach House Press in Toronto. Both are out-of-print. We hope to find a publisher who will be interested in reprinting these books so they will be generally available and Bill Hutton will finally get the recognition he deserves.

Baby faces hundreds of them, all marching to the candy store in a crazy green whirl that defies imagination and logic.

"We want to vote," they shout -- ambassadors, world titular heads, Peace & War people.  "No we don't want to vote!  Then give us some of those licorice whips!"

The Roumanian delegation settles for Candy Green Leaves.  The Mexicans of course order hot balls.  On and on and on.  The Americans ask for something the guy has never heard of even.  Some crazy stuff that sounds like giodersvierel or something.  Candy man's going out of his head, dropping the little white sacks and everything.

"We made these bags," say the Japanese.

Peppermints remind a man from Austria of Christmas when he was a boy & wearing leather shorts and how in the morning they'd find peppermint candy by the base of the pine tree.  The candy was red and white in the snow and cold& he remembers how he could look up from the pine tree to the mountains and how the clouds were always rolling by in the same direction, how he believed his dead grandpa was in those clouds...

This was the peace conference.  All the nations were gathered to find

out what was wrong.  There was much wrong everywhere and they were at the candy store to find out why everything was so wrong exactly and what was how and why.  Or it could have been a hardware store or a bedroom or a bank or a sporting goods store.

"This candy tastes like a nihilistic dream," moans a Turk, a piece of white fudge in his mouth & crumbs on his lower lip no more.

"Marry Janes, Mary Janes," blabbers the Canadian, an audience at bay by the hard candy jars.  "When I was a kid me and me brother allus use to hold up this little gas station down the hill from us.  It was in the summer and we'd walk down the green hill with these hot overcoats on, see, and then we'd stick the guy up!  But we were just pretending and he was nice and would put his arms over his head and say, 'Oh, don't shoot me, plea-ea-ease don't shoot me,' an then reach into the cupboard where the candy bars were and take out a couple packets of these Mary Janes!"

"On the Volga," says a Russian Red Russian, butter rum or something melting joyously in his hand, "On the Volga it's just like Yevtushenko says.