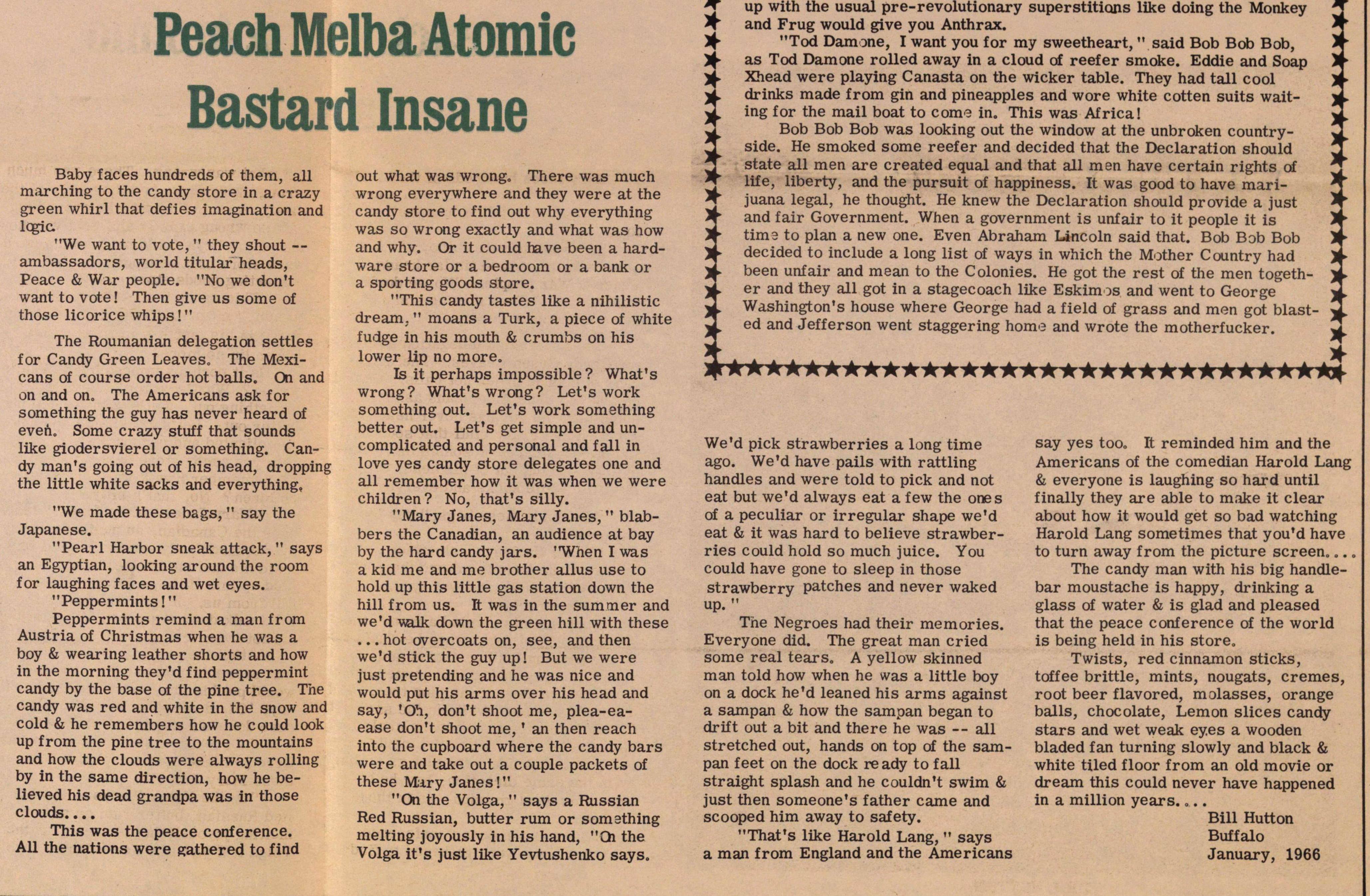 Baby faces hundreds of them, all marching to the candy store in a crazy green whirl that defies imagination and logic.

"We want to vote," they shout -- ambassadors, world titular heads, Peace & War people. "No we don't want to vote! Then give us some of those licorice whips!"

The Roumanian delegation settles for Candy Green Leaves. The Mexicans of course order hot balls. On and on and on. The Americans ask for something the guy has never heard of even. Some crazy stuff that sounds like giodersvierel or something. Candy man's going out of his head, dropping the little white sacks and everything.

"We made these bags, " say the Japanese.

Peppermints remind a man from Austria of Christmas when he was a boy & wearing leather shorts and how in the morning they'd find peppermint candy by the base of the pine tree. The candy was red and white in the snow and cold & he remembers how he could look up from the pine tree to the mountains and how the clouds were always rolling by in the same direction, how he believed his dead grandpa was in those clouds. . . .

This was the peace conference. All the nations were gathered to find out what was wrong. There was much wrong everywhere and they were at the candy store to find out why everything was so wrong exactly and what was how and why. Or it could have been a hardware store or a bedroom or a bank or a sporting goods store.

"This candy tastes like a nihilistic dream. " moans a Turk, a piece of white fudge in his mouth & crumbs on his lower lip no more.

"Mary Janes, Mary Janes, " blabbers the Canadian, an audience at bay by the hard candy jars. "When I was a kid me and me brother allus use to hold up this little gas station down the hill from us. It was in the summer and we'd walk down the green hill with these . . . hot overcoats on, see, and then we'd stick the guy up! But we were just pretending and he was nice and would put his arms over his head and say, 'Oh, don't shoot me, plea-ea-ease don't shoot me,' an then reach into the cupboard where the candy bars were and take out a couple packets of these Mary Janes!"

"On the Volga, " says a Russian Red Russian, butter rum or something melting joyously in his hand, "On the Volga it's just like Yevtushenko says.

We'd pick strawberries a long time ago. We'd have pails with rattling handles and were told to pick and not eat but we'd always eat a few the ones of a peculiar or irregular shape we'd eat & it was hard to believe strawberries could hold so much juice. You could have gone to sleep in those strawberry patches and never waked up.

"The Negroes had their memories. Everyone did. The great man cried some real tears. A yellow skinned man told how when he was a little boy on a dock he'd leaned his arms against a sampan & how the sampan began to drift out a bit and there he was -- all stretched out, hands on top of the sampan feet on the dock ready to fall straight splash and he couldn't swim & just then someone's father came and scooped him away to safety.

"That's like Harold Lang," says a man from England and the Americans

say yes too. It reminded him and the Americans of the comedian Harold Lang & everyone is laughing so hard until finally they are able to make it clear about how it would get so bad watching Harold Lang sometimes that you'd have to turn away from the picture screen...

The candy man with his big handlebar moustache is happy, drinking a glass of water & is glad and pleased that the peace conference of the world is being held in his store.