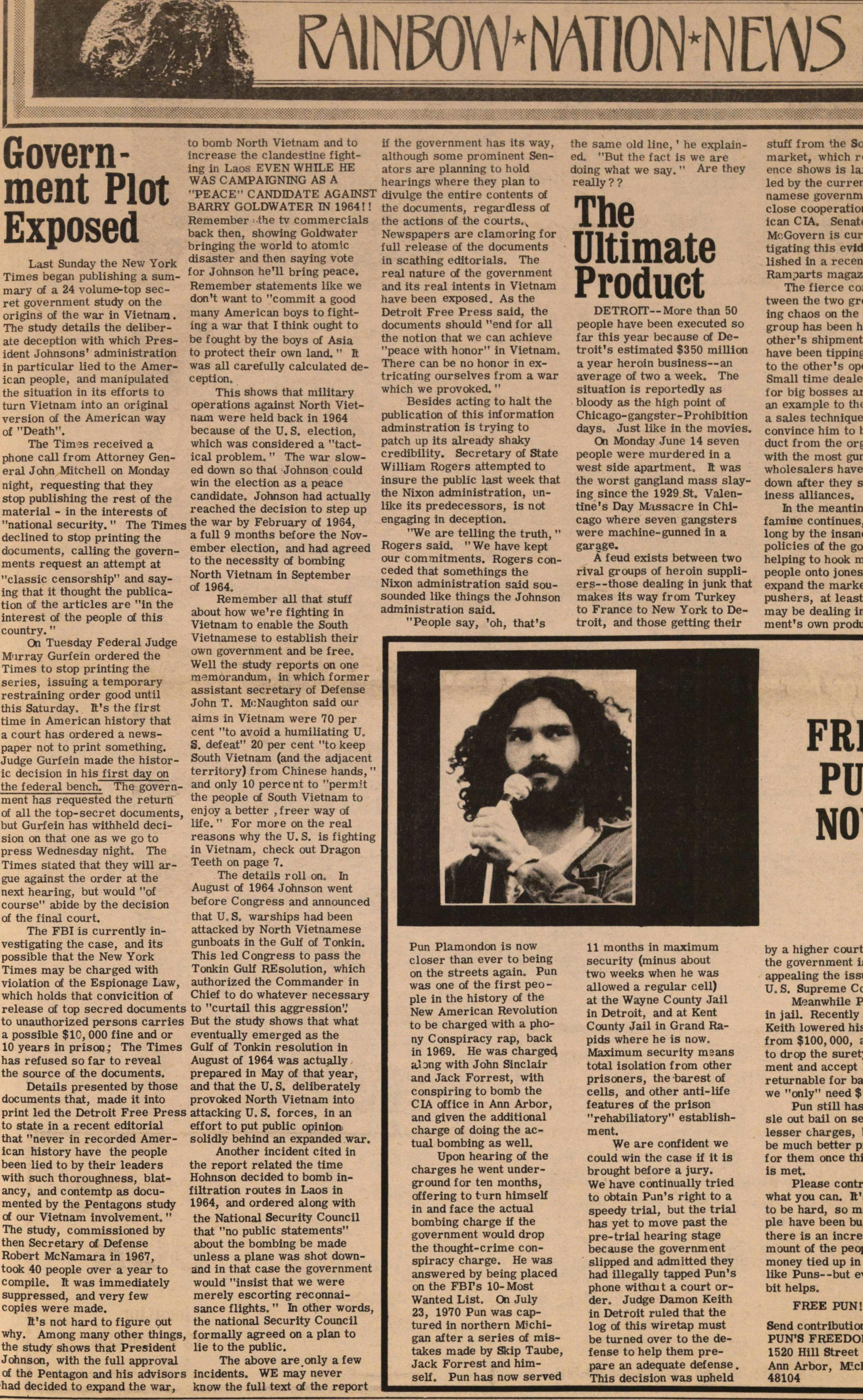 Last Sunday the New York Times began publishing a summary of a 24 volume-top secret government study on the origins of the war in Vietnam. The study details the deliberate deception with which President Johnsons' administration in particular lied to the American people, and manipulated the situation in its efforts to turn Vietnam into an original version of the American way of "Death".

The Times received a phone cali from Attorney General John Mitchell on Monday night, requesting that they stop publishing the rest of the material - in the interests of "national security." The Times declined to stop printing the documents, calling the governments request an attempt at "classic censorship" and saying that it thought the publication of the articles are "in the interest of the people of this country."

On Tuesday Federal Judge Murray Gurfein ordered the Times to stop printing the series, issuing a temporary restraining order good until this Saturday. It's the first time in American history that a court has ordered a newspaper not to print something. Judge Gurfein made the historic decision in his first day on the federal bench. The government has requested the return of all the top-secret documents, but Gurfein has withheld decision on that one as we go to press Wednesday night. The Times stated that they will argue against the order at the next hearing, but would "of course" abide by the decision of the final court.

The FBI is currently investigating the case, and its possible that the New York Times may be charged with violation of the Espionage Law, which holds that convicition of release of top secred documents to unauthorized persons carries a possible $10,000 fine and or 10 years in prison; The Times has refused so far to reveal the source of the documents.

Details presented by those documents that, made it into print led the Detroit Free Press to state in a recent editorial that "never in recorded American history have the people been lied to by their leaders with such thoroughness, blatancy, and contemtp as documented by the Pentagons study of our Vietnam involvement. " The study, commissioned by then Secretary of Defense Robert McNamara in 1967, took 40 people over a year to compile. It was immediately suppressed, and very few copies were made.

It's not hard to figure out why. Among many other things, the study shows that President Johnson, with the full approval of the Pentagon and his advisors had decided to expand the war, to bomb North Vietnam and to increase the clandestine fighting in Laos EVEN WHILE HE WAS CAMPAIGNING AS A "PEACE" CANDIDATE AGAINST BARRY GOLDWATER IN 1964!! Remember the tv commercials back then, showing Goldwater bringing the world to atomic disaster and then saying vote for Johnson he'll bring peace. Remember statements like we don't want to "commit a good many American boys to fighting a war that I think ought to be fought by the boys of Asia to protect their own land." It was all carefully calculated deception.

This shows that military operations against North Vietnam were held back in 1964 because of the U.S. election, which was considered a "tactical problem." The war slowed down so that Johnson could win the election as a peace candidate. Johnson had actually reached the decision to step up the war by February of 1964, a full 9 months before the November election, and had agreed to the necessity of bombing North Vietnam in September of 1964.

Remember all that stuff about how we're fighting in Vietnam to enable the South Vietnamese to establish their own government and be free. Well the study reports on one memorandum, in which former assistant secretary of Defense John T. McNaughton said our aims in Vietnam were 70 per cent "to avoid a humiliating U.S. defeat" 20 per cent "to keep South Vietnam (and the adjacent territory) from Chinese hands," and only 10 percent to "permit the people of South Vietnam to enjoy a better, freer way of life. " For more on the real reasons why the U.S. is fighting in Vietnam, check out Dragon Teeth on page 7.

The details roll on. In August of 1964 Johnson went before Congress and announced that U.S. warships had been attacked by North Vietnamese gunboats in the Gulf of Tonkin. This led Congress to pass the Tonkin Gulf REsolution, which authorized the Commander in Chief to do whatever necessary to "curtail this aggression." But the study shows that what eventually emerged as the Gulf of Tonkin resolution in August of 1964 was actually prepared in May of that year, and that the U.S. deliberately provoked North Vietnam into attacking U.S. forces, in an effort to put public opinion, solidly behind an expanded war.

Another incident cited in the report related the time Hohnson decided to bomb infiltration routes in Laos in 1964, and ordered along with the National Security Council that "no public statements" about the bombing be made unless a plane was shot down and in that case the government would "insist that we were merely escorting reconnaisance flights." In other words, the national Security Council formally agreed on a plan to lie to the public.

The above are only a few incidents. WE may never know the full text of the report if the government has its way, although some prominent Senators are planning to hold hearings where they plan to divulge the entire contents of the documents, regardless of the actions of the courts. Newspapers are clamoring for full release of the documents in scathing editorials. The real nature of the government and its real intents in Vietnam have been exposed. As the Detroit Free Press said, the documents should "end for all the notion that we can achieve "peace with honor" in Vietnam, There can be no honor in extricating ourselves from a war which we provoked."

Besides acting to halt the publication of this inf ormation adminstration is trying to patch up its already shaky credibility. Secretary of State William Rogers attempted to insure the public last week that the Nixon administration, unlike its predecessors, is not engaging in deception.

"People say, 'oh, that's the same old line,' he explained "But the fact is we are doing what we say." Are they really??