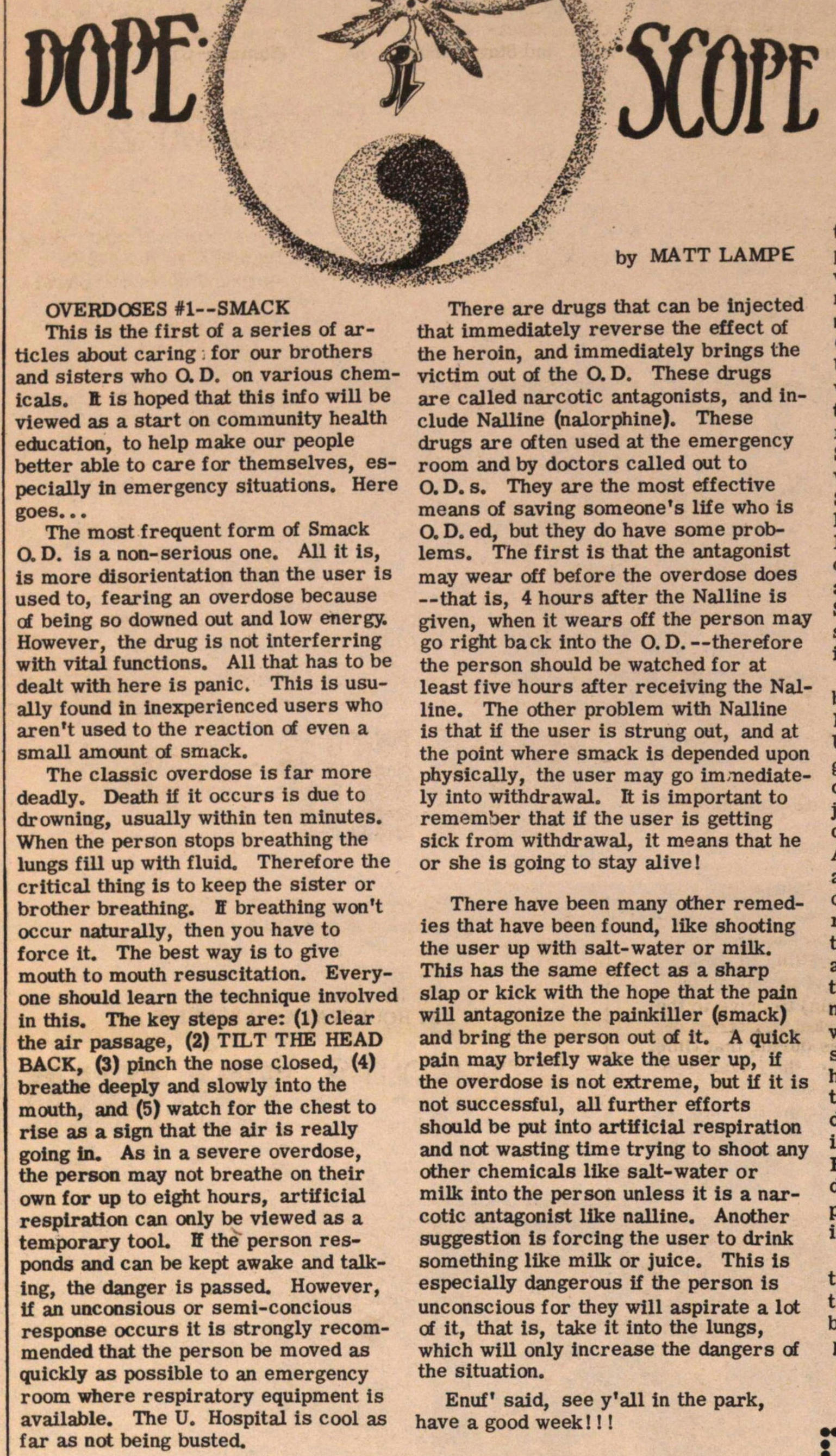 This is the first of a series of articles about caring for our brothers and sisters who O.D. on various chemicals. It is hoped that this info will be viewed as a start on community health education, to help make our people better able to care for themselves, especially in emergency situations. Here goes. . .

The most frequent form of Smack O.D. is a non-serious one. All it is, is more disorientation than the user is used to, fearing an overdose because of being so downed out and low energy. However, the drug is not interferring with vital functions. All that has to be dealt with here is panic. This is usually found in inexperienced users who aren't used to the reaction of even a small amount of smack.

The classic overdose is far more deadly. Death if it occurs is due to drowning, usually within ten minutes. When the person stops breathing the lungs fill up with fluid. Therefore the critical thing is to keep the sister or brother breathing. If breathing won't occur naturally, then you have to force it. The best way is to give mouth to mouth resuscitation. Everyone should learn the technique involved in this. The key steps are: (1) clear the air passage, (2) TILT THE HEAD BACK, (3) pinch the nose closed, (4) breathe deeply and slowly into the mouth, and (5) watch for me chest to rise as a sign that the air is really going in. As in a severe overdose, the person may not breathe on their own for up to eight hours, artificial respiration can only be viewed as a temporary tool. If the person responds and can be kept awake and talking, the danger is passed. However, if an unconsious or semi-concious response occurs it is strongly recommended that the person be moved as quickly as possible to an emergency room where respiratory equipment is available. The U. Hospital is cool as far as not being busted.

There are drugs that can be injected that immediately reverse the effect of the heroin, and immediately brings the victim out of the O.D. These drugs are called narcotic antagonists, and include Nalline (nalorphine). These drugs are often used at the emergency room and by doctors called out to O.D.s. They are the most effective means of saving someone's life who is O.D.ed, but they do have some problems. The first is that the antagonist may wear off before the overdose does --that is, 4 hours after the Nalline is given, when it wears off the person may go right back into the O.D. - therefore the person should be watched for at least five hours after receiving the Nalline. The other problem with Nalline is that if the user is strung out, and at the point where smack is depended upon physically, the user may go immediately into withdrawal. It is important to remember that if the user is getting sick from withdrawal, it means that he or she is going to stay alive!

There have been many other remedies that have been found, like shooting the user up with salt water or milk. This has the same effect as a sharp slap or kick with the hope that the pain will antagonize the painkiller (smack) and bring the person out of it. A quick pain may briefly wake the user up, if the overdose is not extreme, but if it is not successful, all further efforts should be put into artificial respiration and not wasting time trying to shoot any other chemicals like water or milk into the person unless it is a narcotic antagonist like nalline. Another suggestion is forcing the user to drink something like milk or juice. This is especially dangerous if the person is unconscious for they will aspirate a lot of it, that is, take it into the lungs, which will only increase the dangers of the situation.