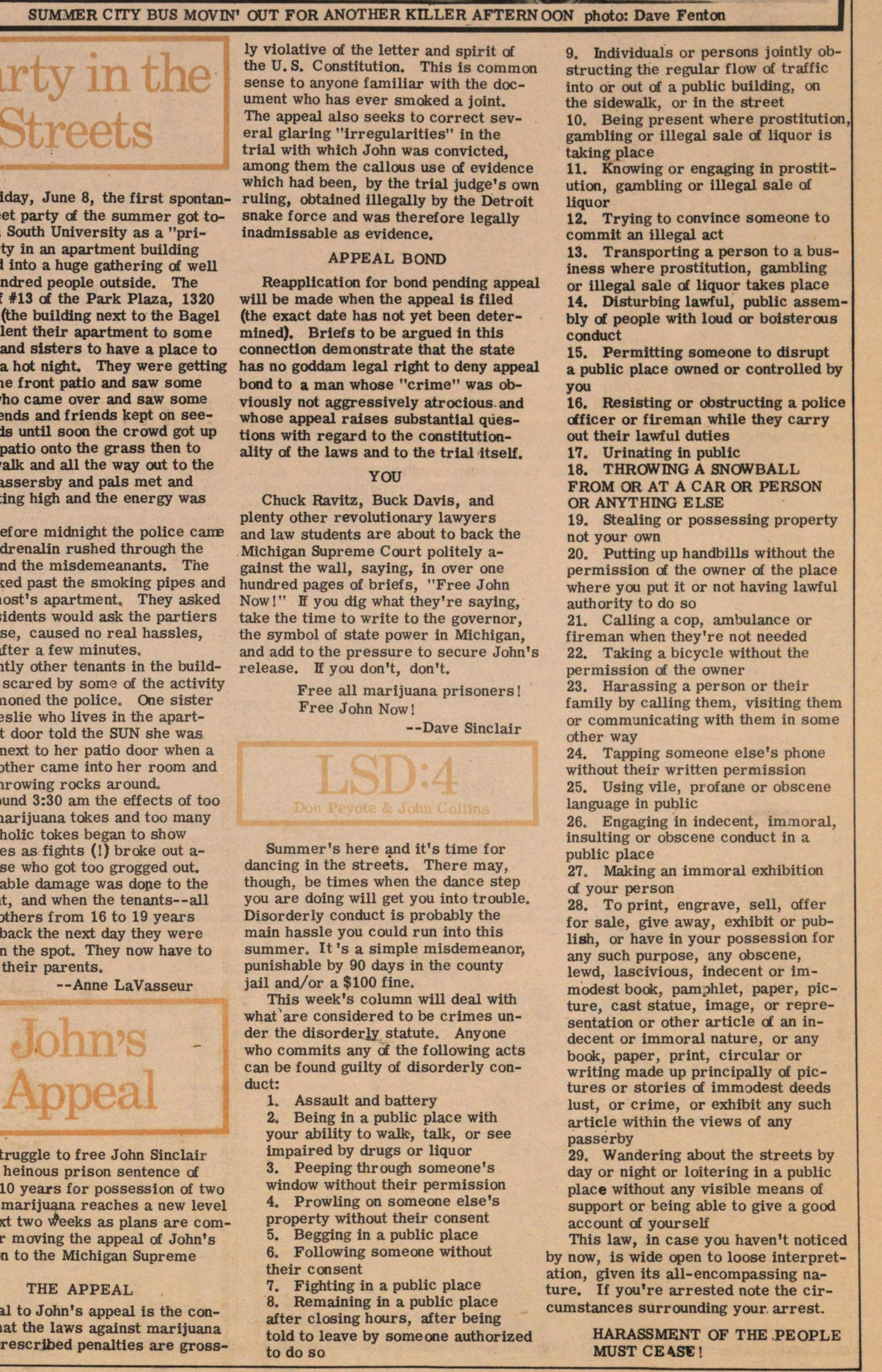 Summer's here and it's time for dancing in the streets. There may, though, be times when the dance step you are doing will get you into trouble. Disorderly conduct is probably the main hassle you could run into this summer. It's a simple misdemeanor, punishable by 90 days in the county jail and/or a $100 fine.

This week's column will deal with what are considered to be crimes under the disorderly statute. Anyone who commits any of the following acts can be found guilty of disorderly conduct:

2. Being in a public place with your ability to walk, talk, or see impaired by drugs or liquor

3. Peeping through someone's window without their permission

4. Prowling on someone else's property without their consent

5. Begging in a public place

6. Following someone without their consent

7. Fighting in a public place

8. Remaining in a public place after closing hours, after being told to leave by someone authorized to do so

9. Individuals or persons jointly obstructing the regular flow of traffic into or out of a public building, on the sidewalk, or in the street

10. Being present where prostitution, gambling or illegal sale of liquor is taking place

11. Knowing or engaging in prostitution, gambling or illegal sale of liquor

12. Trying to convince someone to commit an illegal act

13. Transporting a person to a business where prostitution, gambling or illegal sale of liquor takes place

15. Permitting someone to disrupt a public place owned or controlled by you

16. Resisting or obstructing a police officer or fireman while they carry out their lawful duties

18. THROWING A SNOWBALL FROM OR AT A CAR OR PERSON OR ANYTHING ELSE

19. Stealing or possessing property not your own

20. Putting up handbills without the permission of the owner of the place where you put it or not having lawful authority to do so

21. Calling a cop, ambulance or fireman when they're not needed

22. Taking a bicycle without the permission of the owner

23. Harassing a person or their family by calling them, visiting them or communicating with them in some other way

24. Tapping someone else's phone without their written permission

26. Engaging in indecent, immoral, insulting or obscene conduct in a public place

27. Making an immoral exhibition of your person

28. To print, engrave, sell, offer for sale, give away, exhibit or publish, or have in your possession for any such purpose, any obscene, lewd, lascivious, indecent or immodest book, pamphlet, paper, picture, cast statue, image, or representation or other article of an indecent or immoral nature, or any book, paper, print, circular or writing made up principally of pictures or stories of immodest deeds, lust, or crime, or exhibit any such article within the views of any passerby

29. Wandering about the streets by day or night or loitering in a public place without any visible means of support or being able to give a good account of yourself

This law, in case you haven't noticed by now, is wide open to loose interpretation, given its all-encompassing nature. If you're arrested note the circumstances surrounding your arrest.

HARASSMENT OF THE PEOPLE MUST CEASE!