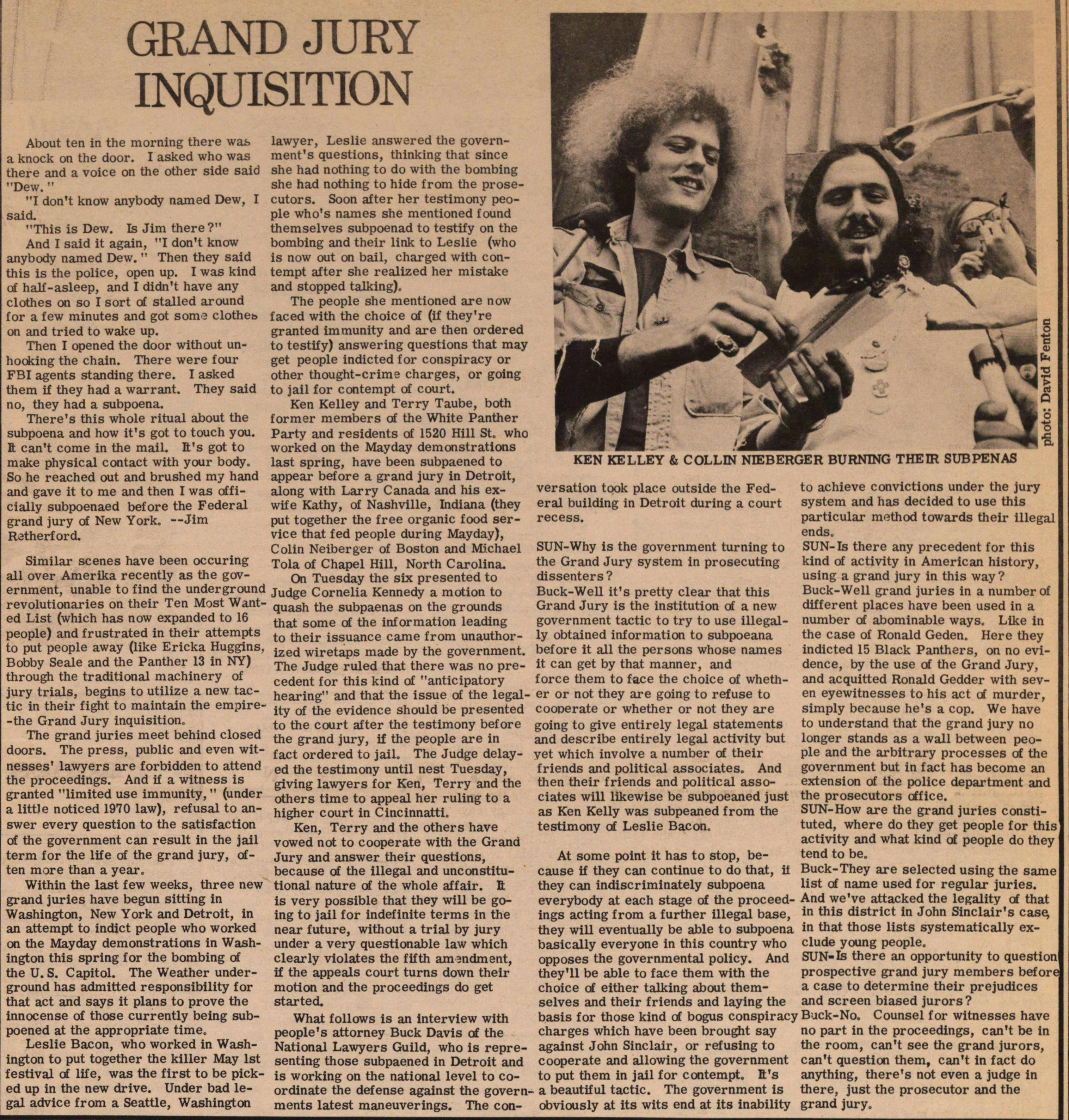 About ten in the morning there was a knock on the door. I asked who was there and a voice on the other side said "Dew. "

"I don't know anybody named Dew, I said.

And I said it again, "I don't know anybody named Dew." Then they said this is the police, open up. I was kind of half-asleep, and I didn't have any clothes on so I sort of stalled around for a few minutes and got some clothes on and tried to wake up.

Then I opened the door without unhooking the chain. There were four FBI agents standing there. I asked them if they had a warrant. They said no, they had a subpoena.

There's this whole ritual about the subpoena and how it's got to touch you. It can't come in the mail. It's got to make physical contact with your body. So he reached out and brushed my hand and gave it to me and then I was officially subpoenaed before the Federal grand jury of New York. --Jim Ratherford.

Similar scenes have been occurring all over Amerika recently as the government, unable to find the underground revolutionaries on their Ten Most Wanted List (which has now expanded to 16 people) and frustrated in their attempts to put people away (like Ericka Huggins, Bobby Seale and the Panther 13 in NY) through the traditional machinery of jury trials, begins to utilize a new tactic in their fight to maintain the empire--the Grand Jury inquisition.

The grand juries meet behind closed doors. The press, public and even witnesses' lawyers are forbidden to attend the proceedings. And if a witness is granted "limited use immunity, " (under a little noticed 1970 law), refusal to answer every question to the satisfaction of the government can result in the jail term for the life of the grand jury, often more than a year.

Within the last few weeks, three new grand juries have begun sitting in Washington, New York and Detroit, in an attempt to indict people who worked on the Mayday demonstrations in Washington this spring for the bombing of the U. S. Capitol. The Weather underground has admitted responsibility for that act and says it plans to prove the innocence of those currently being subpoenaed at the appropriate time.

Leslie Bacon, who worked in Washington to put together the killer May 1st festival of life, was the first to be picked up in the new drive. Under bad legal advice from a Seattle, Washington lawyer, Leslie answered the government's questions, thinking that since she had nothing to do with the bombing she had nothing to hide from the prosecutors. Soon after her testimony people who's names she mentioned found themselves subpoenaed to testify on the bombing and their link to Leslie (who is now out on bail, charged with contempt after she realized her mistake and stopped talking).

The people she mentioned are now faced with the choice of (if they're granted immunity and are then ordered to testify) answering questions that may get people indicted for conspiracy or other thought-crime charges, or going to jail for contempt of court.

Ken Kelley and Terry Taube, both former members of the White Panther Party and residents of 1520 Hill St. who worked on the Mayday demonstrations last spring, have been subpoenaed to appear before a grand jury in Detroit, along with Larry Canada and his ex-wife Kathy, of Nashville, Indiana (they put together the free organic food service that fed people during Mayday), Colin Neiberger of Boston and Michael Tola of Chapel Hill, North Carolina.

On Tuesday the six presented to Judge Cornelia Kennedy a motion to quash the subpoenas on the grounds that some of the information leading to their issuance carne from unauthorized wiretaps made by the government. The Judge ruled that there was no precedent for this kind of "anticipatory hearing" and that the issue of the legality of the evidence should be presented to the court after the testimony before the grand jury, if the people are in fact ordered to jail. The Judge delayed the testimony until next Tuesday, giving lawyers for Ken, Terry and the others time to appeal her ruling to a higher court in Cincinnati.

Ken, Terry and the others have vowed not to cooperate with the Grand Jury and answer their questions, because of the illegal and unconstitutional nature of the whole affair. It is very possible that they will be going to jail for indefinite terms in the near future, without a trial by jury under a very questionable law which clearly violates the fifth amendment, if the appeals court turns down their motion and the proceedings do get started.

What follows is an interview with people's attorney Buck Davis of the National Lawyers Guild, who is representing those subpoenaed in Detroit and is working on the national level to coordinate the defense against the governments latest maneuverings. The conversation took place outside the Federal building in Detroit during a court recess.

SUN-Why is the government turning to the Grand Jury system in prosecuting dissenters?

Buck-Well it's pretty clear that this Grand Jury is the institution of a new government tactic to try to use illegally obtained information to subpoena before it all the persons whose names it can get by that manner, and force them to face the choice of whether or not they are going to refuse to cooperate or whether or not they are going to give entirely legal statements and describe entirely legal activity but yet which involve a number of their friends and political associates. And then their friends and political associates will likewise be subpoenaed just as Ken Kelly was subpoenaed from the testimony of Leslie Bacon

At some point it has to stop, because if they can continue to do that, if they can indiscriminately subpoena everybody at each stage of the proceedings acting from a further illegal base, they will eventually be able to subpoena basically everyone in this country who opposes the governmental policy. And they'll be able to face them with the choice of either talking about themselves and their friends and laying the basis for those kind of bogus conspiracy charges which have been brought say against John Sinclair, or refusing to cooperate and allowing the government to put them in jail for contempt. It's a beautiful tactic. The government is obviously at its wits end at its inability to achieve convictions under the jury system and has decided to use this particular method towards their illegal ends.

SUN-Is there any precedent for this kind of activity in American history, using a grand jury in this way?

Buck-Well grand juries in a number of different places have been used in a number of abominable ways. Like in the case of Ronald Geden. Here they indicted 15 Black Panthers, on no evidence, by the use of the Grand Jury, and acquitted Ronald Gedder with seven eyewitnesses to his act of murder, simply because he's a cop. We have to understand that the grand jury no longer stands as a wall between people and the arbitrary processes of the government but in fact has become an extension of the police department and the prosecutors office.

SUN-How are the grand juries constituted, where do they get people for this activity and what kind of people do they tend to be.

Buck-They are selected using the same list of names used for regular juries. And we've attacked the legality of that in this district in John Sinclair's case, in that those lists systematically exclude young people.

SUN-Is there an opportunity to question prospective grand jury members before a case to determine their prejudices and screen biased jurors?

Buck-No. Counsel for witnesses have no part in the proceedings, can't be in the room, can't see the grand jurors, can't question them, can't in fact do anything, there's not even a judge in there, just the prosecutor and the grand jury.