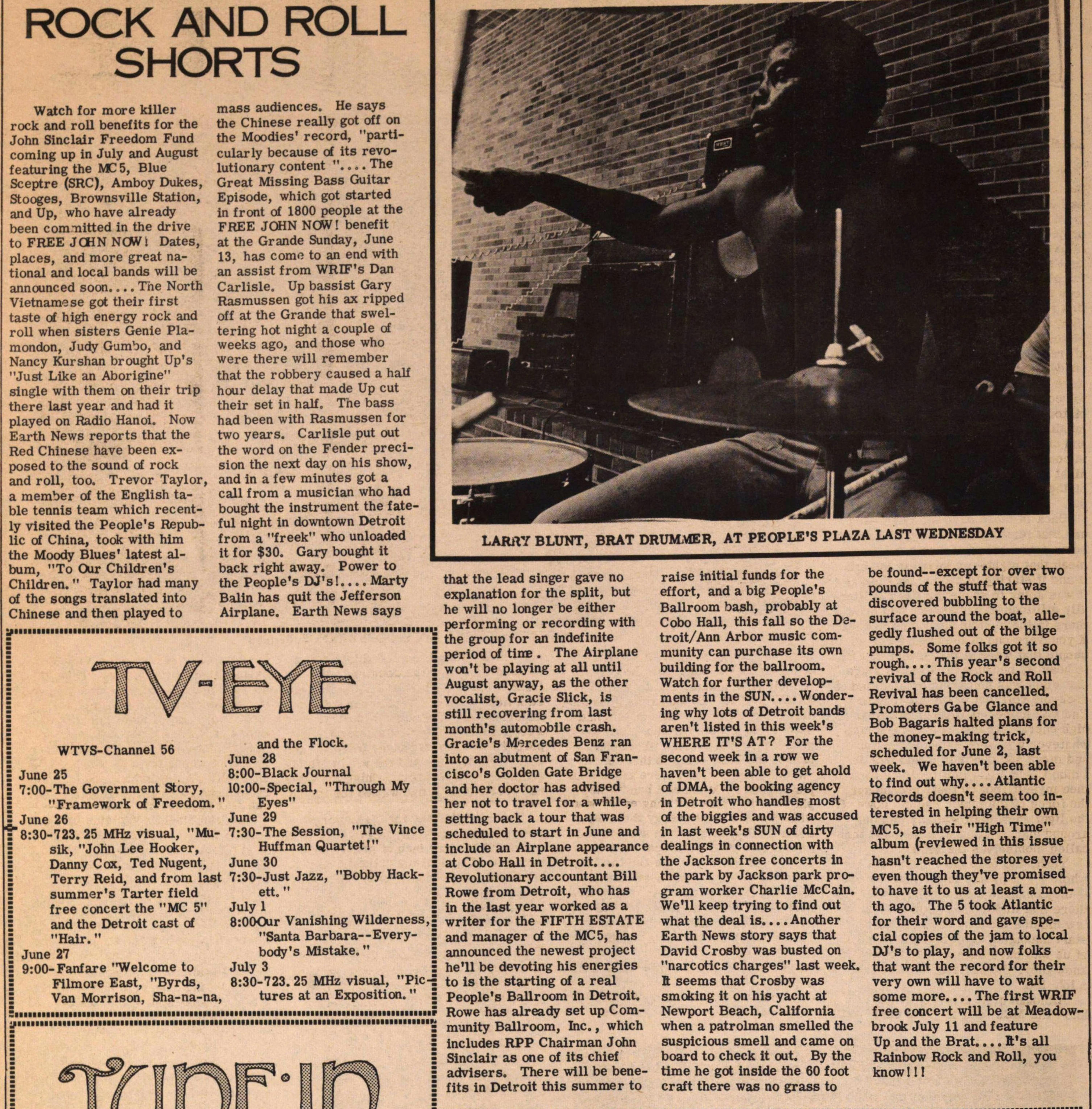 Watch for more killer rock and roll benefits for the John Sinclair Freedom Fund coming up in July and August featuring the MC 5, Blue Sceptre (SRC), Amboy Dukes, Stooges, Brownsville Station, and Up, who have already been committed in the drive to FREE JOHN NOW! Dates, places, and more great national and local bands will be announced soon. . . .The North Vietnamese got their first taste of high energy rock and roll when sisters Genie Plamondon, Judy Gumbo, and Nancy Kurshan brought Up's "Just Like an Aborigine" single with them on their trip there last year and had it played on Radio Hanoi. Now Earth News reports that the Red Chinese have been exposed to the sound of rock and roll, too. Trevor Taylor, a member of the English table tennis team which recently visited the People's Republic of China, took with him the Moody Blues' latest album, "To Our Children's Children." Taylor had many of the songs translated into Chinese and then played to mass audiences. He says the Chinese really got off on the Moodies' record, "particularly because of its revolutionary content". . . .The Great Missing Bass Guitar Episode, which got started in front of 1800 people at the FREE JOHN NOW! benefit at the Grande Sunday, June 13, has come to an end with an assist from WRIF's Dan Carlisle. Up bassist Gary Rasmussen got his ax ripped off at the Grande that sweltering hot night a couple of weeks ago, and those who were there will remember that the robbery caused a half hour delay that made Up cut their set in half. The bass had been with Rasmussen for two years. Carlisle put out the word on the Fender precision the next day on his show, and in a few minutes got a call from a musician who had bought the instrument the fateful night in downtown Detroit from a "freek" who unloaded it for $30. Gary bought it back right away. Power to the People's DJ's!. . . .Marty Balin has quit the Jefferson Airplane. Earth News says that the lead singer gave no explanation for the split, but he will no longer be either performing or recording with the group for an indefinite period of time. The Airplane won't be playing at all until August anyway, as the other vocalist, Gracie Slick, is still recovering from last month's automobile crash. Gracie's Mercedes Benz ran into an abutment of San Francisco's Golden Gate Bridge and her doctor has advised her not to travel for a while, setting back a tour that was scheduled to start in June and include an Airplane appearance at Cobo Hall in Detroit. . . .Revolutionary accountant Bill Rowe from Detroit, who has in the last year worked as a writer for the FIFTH ESTATE and manager of the MC5, has announced the newest project he'll be devoting his energies to is the starting of a real People's Ballroom in Detroit. Rowe has already set up Community Ballroom, Inc., which includes RPP Chairman John Sinclair as one of its chief advisers. There will be benefits in Detroit this summer to raise initial funds for the effort, and a big People's Ballroom bash, probably at Cobo Hall, this fall so the Detroit/Ann Arbor music community can purchase its own building for the ballroom. Watch for further developments in the SUN. . . .Wondering why lots of Detroit bands aren't listed in this week's WHERE IT'S AT? For the second week in a row we haven't been able to get ahold of DMA, the booking agency in Detroit who handles most of the biggies and was accused in last week's SUN of dirty dealings in connection with the Jackson free concerts in the park by Jackson park program worker Charlie McCain. We'll keep trying to find out what the deal is. . . .Another Earth News story says that David Crosby was busted on "narcotics charges" last week. It seems that Crosby was smoking it on his yacht at Newport Beach, California when a patrolman smelled the suspicious smell and carne on board to check it out. By the time he got inside the 60 foot craft there was no grass to be found--except for over two pounds of the stuff that was discovered bubbling to the surface around the boat, allegedly flushed out of the bilge pumps. Some folks got it so rough. . . .This year's second revival of the Rock and Roll Revival has been cancelled. Promoters Gabe Glance and Bob Bagaris halted plans for the money-making trick, scheduled for June 2, last week. We haven't been able to find out why. . . .Atlantic Records doesn't seem too interested in helping their own MC5, as their "High Time" album (reviewed in this issue hasn't reached the stores yet even though they've promised to have it to us at least a month ago. The 5 took Atlantic for their word and gave special copies of the jam to local DJ's to play, and now folks that want the record for their very own will have to wait some more. . . .The first WRIF free concert will be at Meadowbrook July 11 and feature Up and the Brat. . . .It's all Rainbow Rock and Roll, you know!!!