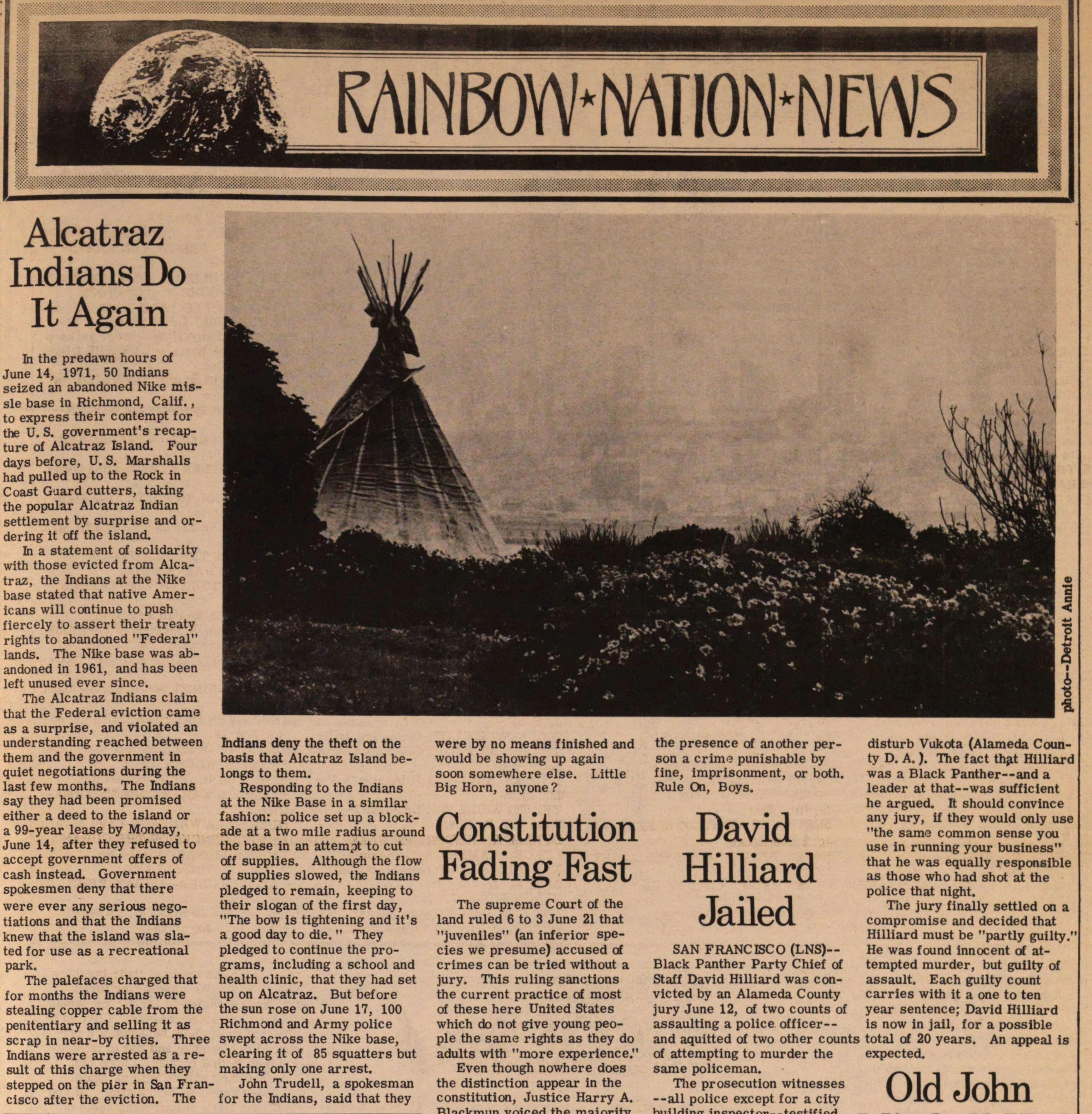 Alcatraz Indians Do It Again

In the predawn hours of June 14, 1971, 50 Indians seized an abandoned Nike missile base in Richmond, Calif., to express their contempt for the U. S. government's recapture of Alcatraz Island. Four days before, U. S. Marshalls had pulled up to the Rock in Coast Guard cutters, taking the popular Alcatraz Indian settlement by surprise and ordering it off the island.

In a statement of solidarity with those evicted from Alcatraz, the Indians at the Nike base stated that native Americans will continue to push fiercely to assert their treaty rights to abandoned "Federal" lands. The Nike base was abandoned in 1961, and has been left unused ever since.

The Alcatraz Indians claim that the Federal eviction came as a surprise, and violated an understanding reached between them and the government in quiet negotiations during the last few months. The Indians say they had been promised either a deed to the island or a 99-year lease by Monday, June 14, after they refused to accept government offers of cash instead. Government spokesmen deny that there were ever any serious negotiations and that the Indians knew that the island was slated for use as a recreational park.

The palefaces charged that for months the Indians were stealing copper cable from the penitentiary and selling it as scrap in near-by cities. Three Indians were arrested as a result of this charge when they stepped on the pier in San Francisco after the eviction. The Indianan deny the theft on the basis that Alcatraz Island belongs to them.

Responding to the Indians at the Nike Base in a similar fashion: police set up a blockade at a two mile radius around the base in an attempt to cut off supplies. Although the flow of supplies slowed, the Indians pledged to remain, keeping to their slogan of the first day, "The bow is tightening and it's a good day to die." They pledged to continue the programs, including a school and health clinic, that they had set up on Alcatraz. But before the sun rose on June 17, 100 Richmond and Army police swept across the Nike base, clearing it of 85 squatters but making only one arrest.

John Trudell, a spokesman for the Indians, said that they were by no means finished and would be showing up again soon somewhere else. Little Big Horn, anyone?