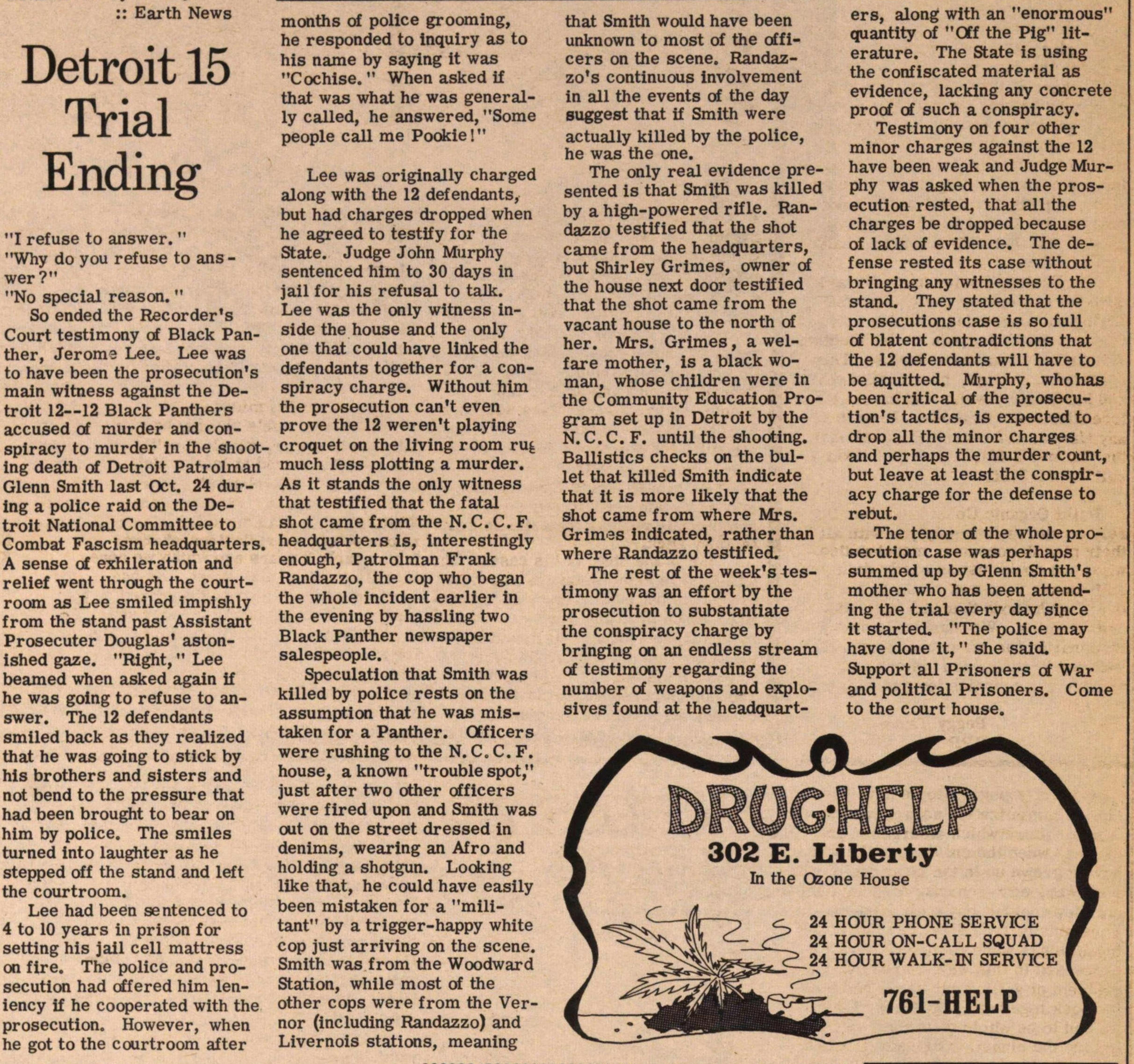 "I refuse to answer."

"Why do you refuse to answer?"

So ended the Recorder's Court testimony of Black Panther, Jerome Lee. Lee was to have been the prosecution's main witness against the Detroit 12–12 Black Panthers accused of murder and conspiracy to murder in the shootIng death of Detroit Patrolman Glenn Smith last Oct. 24 during a police raid on the Detroit National Committee to Combat Fascism headquarters. A sense of exhilaration and relief went through the courtroom as Lee smiled impishly from the stand past Assistant Prosecuter Douglas' astonished gaze. "Right, " Lee beamed when asked again if he was going to refuse to answer. The 12 defendants smiled back as they realized that he was going to stick by his brothers and sisters and not bend to the pressure that had been brought to bear on him by police. The smiles turned into laughter as he stepped off the stand and left the courtroom.

Lee had been sentenced to 4 to 10 years in prison for setting his jail cell mattress on fire. The police and prosecution had offered him leniency if he cooperated with the prosecution. However, when he got to the courtroom after months of police grooming, he responded to inquiry as to his name by saying it was "Cochise." When asked if that was what he was generally called, he answered, "Some people call me Pookie!"

Lee was originally charged along with the 12 defendants, but had charges dropped when he agreed to testify for the State. Judge John Murphy sentenced him to 30 days in jail for his refusal to talk. Lee was the only witness inside the house and the only one that could have linked the defendants together for a conspiracy charge. Without him the prosecution can't even prove the 12 weren't playing croquet on the living room rug, much less plotting a murder. As it stands, the only witness that testified that the fatal shot came from the N.C.C.F. headquarters is, interestingly enough, Patrolman Frank Randazzo, the cop who began the whole incident earlier in the evening by hassling two Black Panther newspaper salespeople.

Speculation that Smith was killed by police rests on the assumption that he was mistaken for a Panther. Officers were rushing to the N.C.C.F. house, a known "trouble spot," just after two other officers were fired upon and Smith was out on the street dressed in denims, wearing an Afro and holding a shotgun. Looking like that, he could have easily been mistaken for a "militant" by a trigger-happy white cop just arriving on the scene. Smith was from the Woodward Station, while most of the other cops were from the Vernor (including Randazzo) and Livernois stations, meaning that Smith would have been unknown to most of the officers on the scene. Randazzo's continuous involvement in all the events of the day suggest that if Smith were actually killed by the police, he was the one.

The rest of the week's testimony was an effort by the prosecution to substantiate the conspiracy charge by bringing on an endless stream of testimony regarding the number of weapons and explosives found at the headquarters, along with an "enormous" quantity of "Off the Pig" literature. The State is using the confiscated material as evidence, lacking any concrete proof of such a conspiracy.

Testimony on four other minor charges against the 12 have been weak and Judge Murphy was asked when the prosecution rested, that all the charges be dropped because of lack of evidence. The defense rested its case without bringing any witnesses to the stand. They stated that the prosecution's case is so full of blatant contradictions that the 12 defendants will have to be aquitted. Murphy, who has been critical of the prosecution's tactics, is expected to drop all the minor charges and perhaps the murder count, but leave at least the conspiracy charge for the defense to rebut.

The tenor of the whole prosecution case was perhaps summed up by Glenn Smith's mother, who has been attending the trial every day since it started. "The police may have done it," she said. Support all Prisoners of War and political Prisoners. Come to the court house.