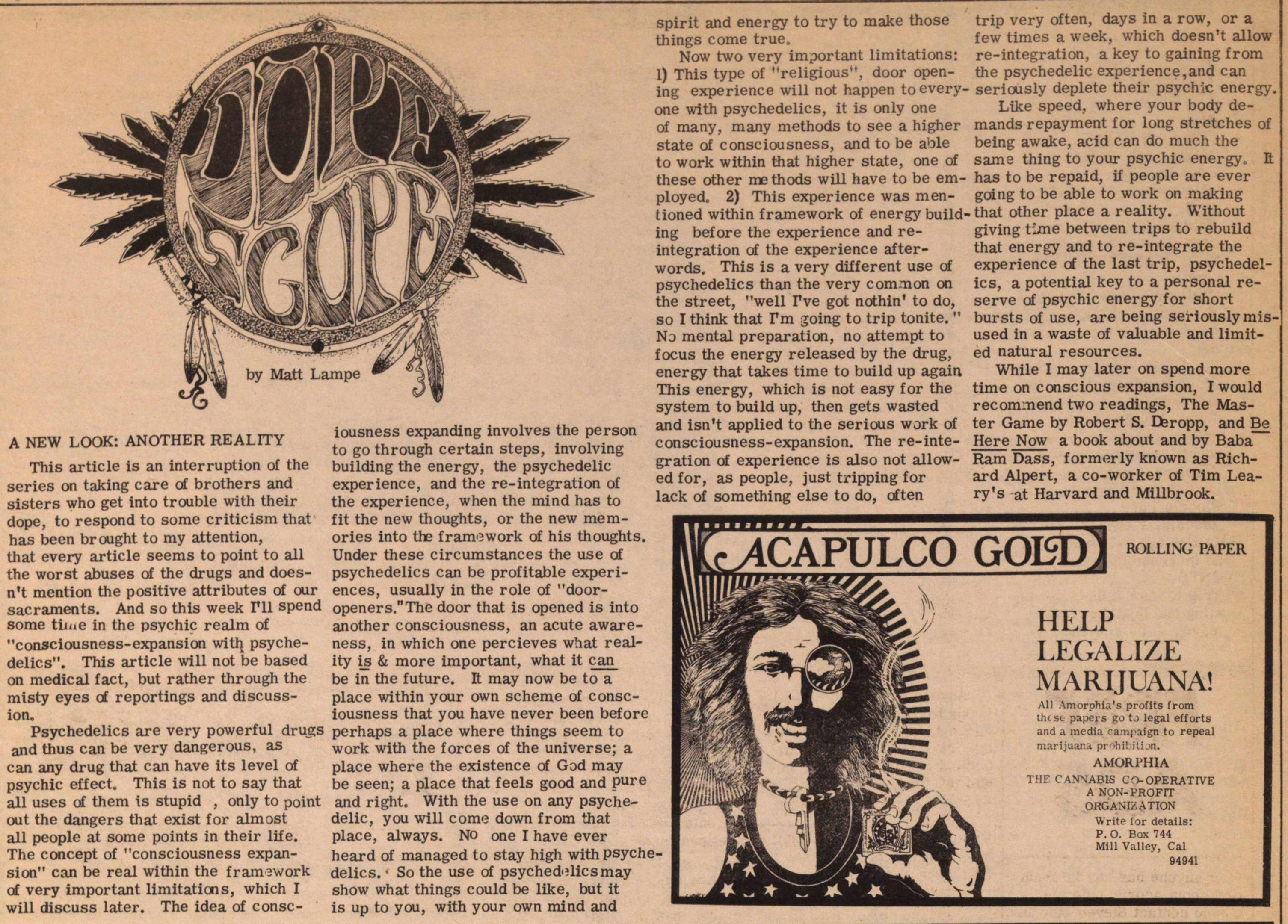 A NEW LOOK:  ANOTHER REALITY

This article is an interruption of the series on taking care of brothers and sisters who get into trouble with their dope, to respond to some criticism that has been brought to my attention, that every article seems to point to all the worst abuses of the drugs and doesn't mention the positive attributes of our sacraments. And so this week I'll spend some time in the psychic realm of "consciousness-expansion with psychedelics". This article will not be based on medical fact, but rather through the misty eyes of reportings and discussion.

Psychedelics are very powerful drugs and thus can be very dangerous, as can any drug that can have its level of psychic effect. This is not to say that all uses of them is stupid, only to point out the dangers that exist for almost all people at some points in their life. The concept of "consciousness expansion" can be real within the framework of very important limitations, which I will discuss later. The idea of consciousness expanding involves the person to go through certain steps, involving building the energy, the psychedelic experience, and the re-integration of the experience, when the mind has to fit the new thoughts, or the new memories into the framework of his thoughts. Under these circumstances the use of psychedelics can be profitable experiences, usually in the role of "door-openers."  The door that is opened is into another consciousness, an acute awareness, in which one perceives what reality is & more important, what it can be in the future. It may now be to a place within your own scheme of consciousness that you have never been before perhaps a place where things seem to work with the forces of the universe; a place where the existence of God may be seen; a place that feels good and pure and right. With the use on any psychedelic, you will come down from that place, always. No one I have ever heard of managed to stay high with psychedelics. So the use of psychedelics may show what things could be like, but it is up to you, with your own mind and spirit and energy to try to make those things come true.

Now two very important limitations: 1) This type of "religious", door opening experience will not happen to everyone with psychedelics, it is only one of many, many methods to see a higher state of consciousness, and to be able to work within that higher state, one of these other methods will have to be employed. 2) This experience was mentioned within framework of energy building before the experience and reintegration of the experience afterwords. This is a very different use of psychedelics than the very common on the street, "well I've got nothin' to do, so I think that I'm going to trip tonite." No mental preparation, no attempt to focus the energy released by the drug, energy that takes time to build up again. This energy, which is not easy for the system to build up, then gets wasted and isn't applied to the serious work of consciousness-expansion. The re-integration of experience is also not allowed for, as people, just tripping for lack of something else to do, often trip very often, days in a row, or a few times a week, which doesn't allow re-integration, a key to gaining from the psychedelic experience,and can seriously deplete their psychic energy.

Like speed, where your body demands repayment for long stretches of being awake, acid can do much the same thing to your psychic energy. It has to be repaid, if people are ever going to be able to work on making that other place a reality. Without giving time between trips to rebuild that energy and to re-integrate the experience of the last trip, psychedelics, a potential key to a personal reserve of psychic energy for short bursts of use, are being seriously misused in a waste of valuable and limited natural resources.

While I may later on spend more time on conscious expansion, I would recommend two readings, The Master Game by Robert S. Deropp, and Be Here Now a book about and by Baba Ram Dass, formorly known as Richard Alpert, a co-worker of Tim Leary's at Harvard and Millbrook.