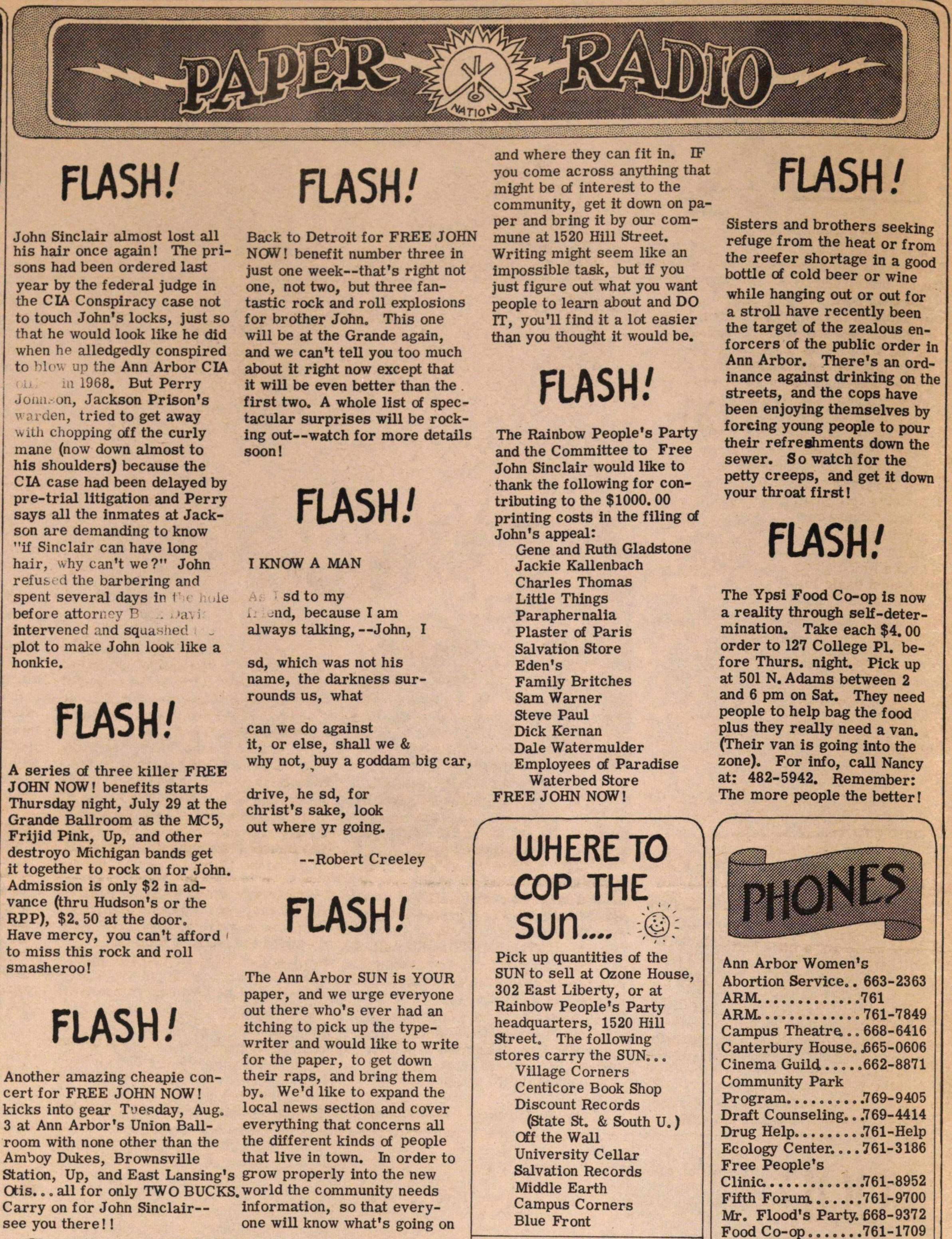 John Sinclair almost lost all his hair once again! The prisons had been ordered last year by the federal judge in the CIA Conspiracy case not to touch John's locks, just so that he would look like he did when he alledgedly conspired to blow up the Ann Arbor CIA office in 1968. But Perry Johnson, Jackson Prison's warden, tried to get away with clipping off the curly mane (now down almost to his shoulders) because the CIA case had been delayed by pre-trial litigation and Perry says all the inmates at Jackson are demanding to know "if Sinclair can have long hair, why can't we?" John refused the barbering and spent several days in the hole before attorney Buck Davis intervened and squashed the plot to make John look like a honkie.

A series of three killer FREE JOHN NOW! benefits starts Thursday night, July 29 at the Grande Ballroom as the MC5, Frijid Pink, Up, and other destroyo Michigan bands get it together to rock on for John. Admission is only $2 in advance (thru Hudson's or the RPP), $2.50 at the door. Have mercy, you can't afford to miss this rock and roll smasheroo!

Another amazing cheapie concert for FREE JOHN NOW! kicks into gear Tuesday, Aug. 3 at Ann Arbor's Union Ballroom with none other than the Amboy Dukes, Brownsville Station, Up, and East Lansing's Otis. . .all for only TWO BUCKS. Carry on for John Sinclair--see you there!!

Back to Detroit for FREE JOHN NOW! benefit number three in just one week--that's right not one, not two, but three fantastic rock and roll explosions for brother John. This one will be at the Grande again, and we can't tell you too much about it right now except that it will be even better than the first two. A whole list of spectacular surprises will be rocking out--watch for more details soon!

I KNOW A MAN

As I sd to my
friend, because l am
always talking,--John, I

sd, which was not his
name, the darkness sur-
rounds us, what

can we do against
it, or else, shall we &
why not, buy a goddam big car,

drive, he sd, for
christ's sake, look
out where yr going.

The Ann Arbor SUN is YOUR paper, and we urge everyone out there who's ever had an itching to pick up the typewriter and would like to write for the paper, to get down their raps, and bring them by. We'd like to expand the local news section and cover everything that concerns all the different kinds of people that live in town. In order to grow properly into the new world the community needs information, so that everyone will know what's going on and where they can fit in. IF you come across anything that might be of interest to the community, get it down on paper and bring it by our commune at 1520 Hill Street. Writing might seem like an impossible task, but if you just figure out what you want people to learn about and DO IT, you'll find it a lot easier than you thought it would be.

The Rainbow People's Party and the Committee to Free John Sinclair would like to thank the following for contributing to the $1000.00 printing costs in the filing of John's appeal:

Sisters and brothers seeking refuge from the heat or from the reefer shortage in a good bottle of cold beer or wine while hanging out or out for a stroll have recently been the target of the zealous enforcers of the public order in Ann Arbor. There's an ordinance against drinking on the streets, and the cops have been enjoying themselves by forcing young people to pour their refreshments down the sewer. So watch for the petty creeps, and get it down your throat first!

The Ypsi Food Co-op is now a reality through self-determination. Take each $4.00 order to 127 College PI. before Thurs. night. Pick up at 501 N. Adams between 2 and 6 pm on Sat. They need people to help bag the food plus they really need a van. (Their van is going into the zone). For info, call Nancy at: 482-5942. Remember: The more people the better!

Pick up quantities of the SUN to sell at Ozone House, 302 East Liberty, or at Rainbow People's Party headquarters, 1520 Hill Street. The following stores carry the SUN...