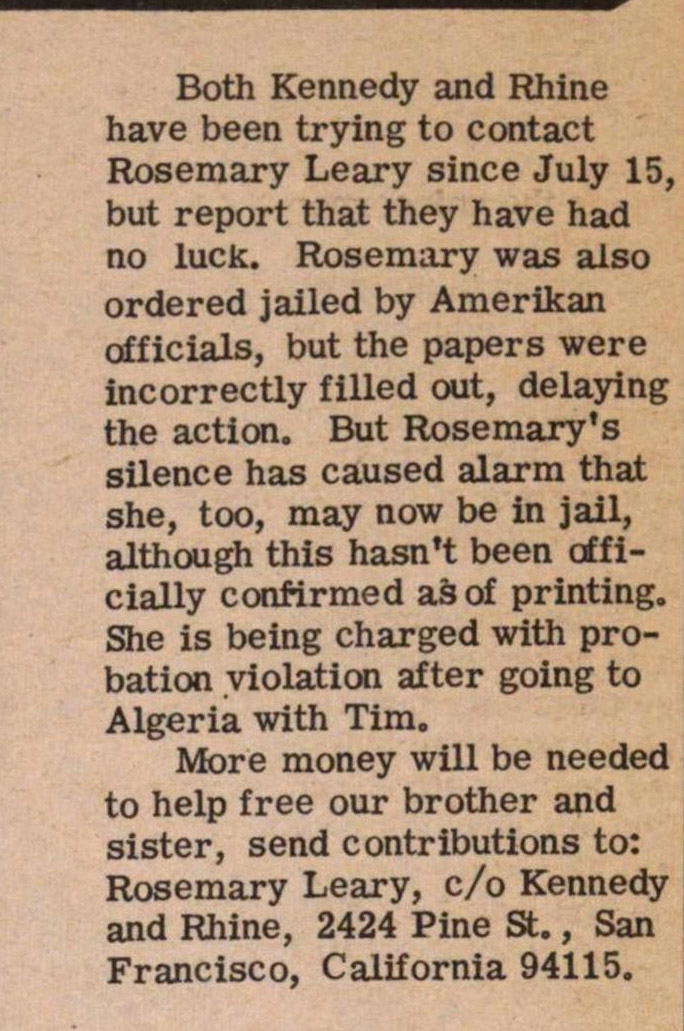 Brother Tim Leary is still imprisoned in a tiny hole in the wall (with no windows), in Lausanne, Switzerland. His imprisonment was due to the Swiss law which says that Amerikan fugitives from "just-us" can remain free until another Amerikan citizen files a complaint. Tim was spotted on the street and betrayed by a U.S. citizen.

In order for Leary's request for political asylum to be reviewed, $120,000 must be raised as ransom. The Swiss Review Board has a common practice of demanding this amount of money to demonstrate that the person seeking asylum is a "substantial citizen". This money will be refunded at the end of a two year period, during which the board will review the request. This is all dependent upon whether or not the money is raised.

Attorney Mike Kennedy is spear-heading a drive to raise the money, along with Leary's Swiss attorney, Horace Mastronardi, which has to be payed by July 23. After this date there will be a month-long "judicial holliday", during which time no court proceedings will take place, meaning that after Friday Tim will have to stay in jail until the end of August. Attorney Joe Rhine is rushing funds to Lausanne in an attempt to make the deadline. Rhine will attempt to prove to the board that Leary was a political prisoner in the U.S., and that he is now seeking political asylum in Switzerland.

Both Kennedy and Rhine have been trying to contact Rosemary Leary since July 15, but report that they have had no luck. Rosemary was also ordered jailed by Amerikan officials, but the papers were incorrectly filled out, delaying the action. But Rosemary's silence has caused alarm that she, too, may now be in jail, although this hasn't been officially confirmed as of printing. She is being charged with probation violation after going to Algeria with Tim.