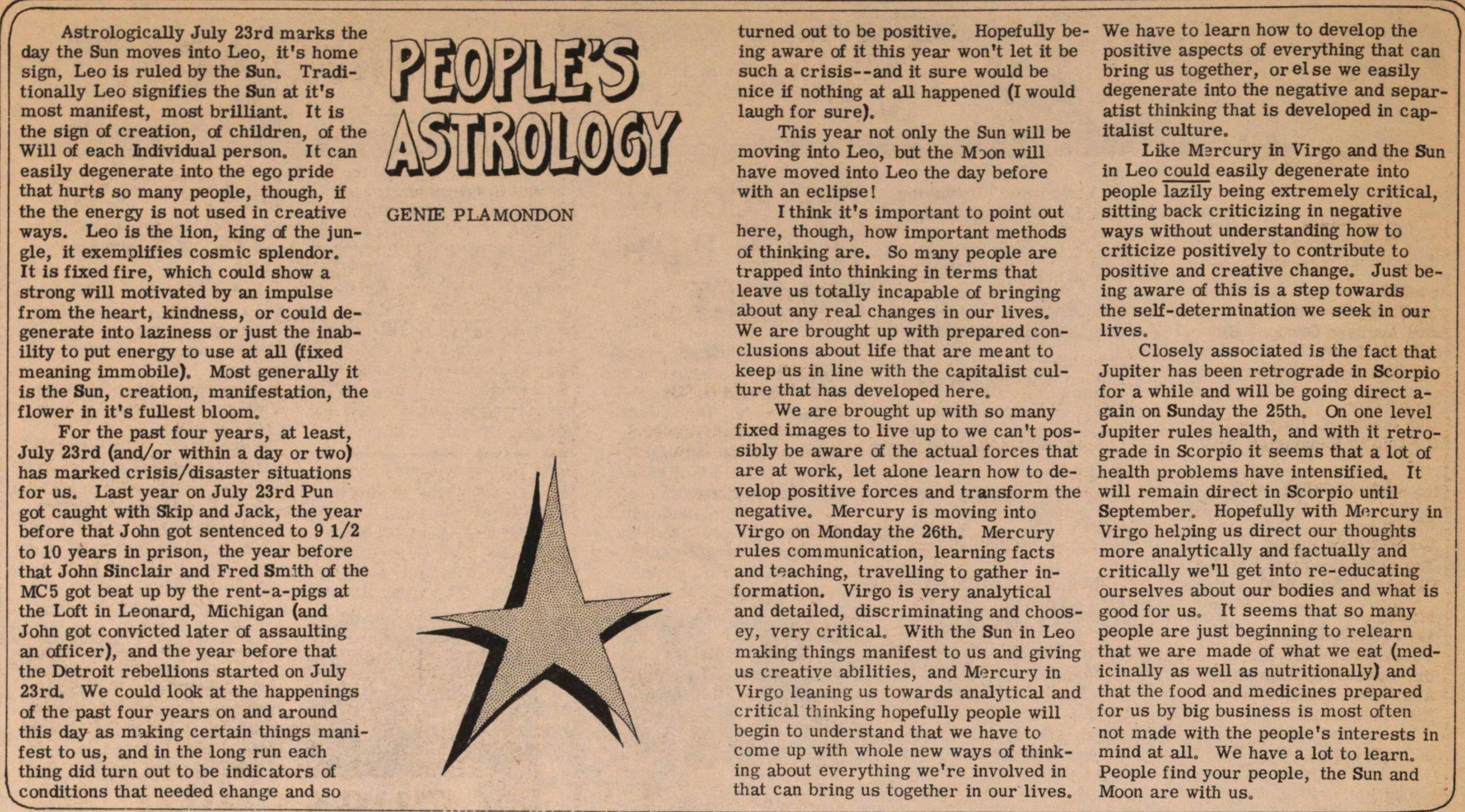 Astrologically July 23rd marks the day the Sun moves into Leo, it's home sign, Leo is ruled by the Sun. Traditionally Leo signifies the Sun at it's most manifest, most brilliant. It is the sign of creation, of children, of the Will of each Individual person. It can easily degenerate into the ego pride that hurts so many people, though, if the the energy is not used in creative ways. Leo is the lion, king of the jungle, it exemplifies cosmic splendor. It is fixed fire, which could show a strong will motivated by an impulse from the heart, kindness, or could degenerate into laziness or just the inability to put energy to use at all (fixed meaning immobile). Most generally it is the Sun, creation, manifestation, the flower in it's fullest bloom.

For the past four years, at least, July 23rd (and/or within a day or two) has marked crisis/disaster situations for us. Last year on July 23rd Pun got caught with Skip and Jack, the year before that John got sentenced to 9 1/2 to 10 years in prison, the year before that John Sinclair and Fred Smith of the MC5 got beat up by the rent-a-pigs at the Loft in Leonard, Michigan (and John got convicted later of assaulting an officer), and the year before that the Detroit rebellions started on July 23rd. We could look at the happenings of the past four years on and around this day as making certain things manifest to us, and in the long run each thing did turn out to be indicators of conditions that needed change and so turned out to be positive. Hopefully being aware of it this year won't let it be such a crisis--and it sure would be nice if nothing at all happened (I would laugh for sure).

This year not only the Sun will be moving into Leo, but the Moon will have moved into Leo the day before with an eclipse!

I think it's important to point out here, though, how important methods of thinking are. So many people are trapped into thinking in terms that leave us totally incapable of bringing about any real changes in our lives. We are brought up with prepared conclusions about life that are meant to keep us in line with the capitalist culture that has developed here.

We are brought up with so many fixed images to live up to we can 't possibly be aware of the actual forces that are at work, let alone learn how to develop positive forces and transform the negative. Mercury is moving into Virgo on Monday the 26th. Mercury rules communication, learning facts and teaching, travelling to gather information. Virgo is very analytical and detailed, discriminating and choosey, very critical. With the Sun in Leo making things manifest to us and giving us creative abilities, and Mercury in Virgo leaning us towards analytical and critical thinking hopefully people will begin to understand that we have to come up with whole new ways of thinking about everything we're involved in that can bring us together in our lives. We have to learn how to develop the positive aspects of everything that can bring us together, or else we easily degenerate into the negative and separatist thinking that is developed in capitalist culture

Like Mercury in Virgo and the Sun in Leo could easily degenerate into people lazily being extremely critical, sitting back criticizing in negative ways without understanding how to criticize positively to contribute to positive and creative change. Just being aware of this is a step towards the self-determination we seek in our lives.

Closely associated is the fact that Jupiter has been retrograde in Scorpio for a while and will be going direct again on Sunday the 25th. On one level Jupiter rules health, and with it retrograde in Scorpio it seems that a lot of health problems have intensified. It will remain direct in Scorpio until September. Hopefully with Mercury in Virgo helping us direct our thoughts more analytically and factually and critically we'll get into re-educating ourselves about our bodies and what is good for us. It seems that so many people are just beginning to relearn that we are made of what we eat (medicinally as well as nutritionally) and that the food and medicines prepared for us by big business is most often not made with the people's interests in mind at all. We have a lot to learn. People find your people, the Sun and Moon are with us.