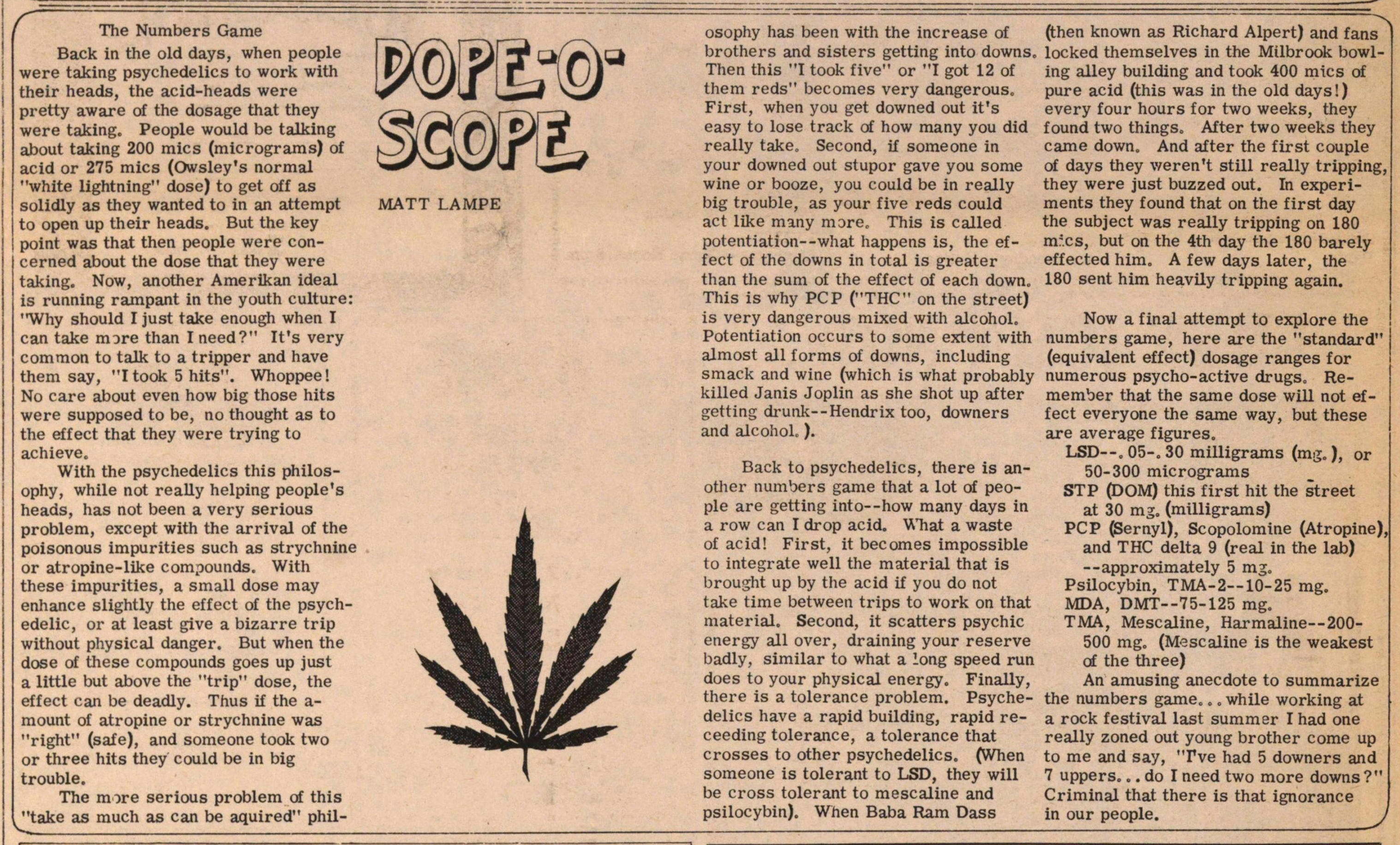 Back in the old days, when people were taking psychedelics to work with their heads, the acid-heads were pretty aware of the dosage that they were taking. People would be talking about taking 200 mics (micrograms) of acid or 275 mics (Owsley's normal "white lightning" dose) to get off as solidly as they wanted to in an attempt to open up their heads. But the key point was that then people were concerned about the dose that they were taking. Now, another Amerikan ideal is running rampant in the youth culture: "Why should I just take enough when I can take more than I need?" It's very common to talk to a tripper and have them say, "I took 5 hits". Whoppee! No care about even how big those hits were supposed to be, no thought as to the effect that they were trying to achieve.

With the psychedelics this philosophy, while not really helping people's heads, has not been a very serious problem, except with the arrival of the poisonous impurities such as strychnine or atropine-like compounds. With these impurities, a small dose may enhance slightly the effect of the psychedelic, or at least give a bizarre trip without physical danger. But when the dose of these compounds goes up just a little but above the "trip" dose, the effect can be deadly. Thus if the amount of atropine or strychnine was "right" (safe), and someone took two or three hits they could be in big trouble.

The more serious problem of this "take as much as can be acquired" philosophy has been with the increase of brothers and sisters getting into downs. Then this "I took five" or "I got 12 of them reds" becomes very dangerous. First, when you get downed out it's easy to lose track of how many you did really take. Second, if someone in your downed out stupor gave you some wine or booze, you could be in really big trouble, as your five reds could act like many more, This is called potentiation--what happens is, the effect of the downs in total is greater than the sum of the effect of each down. This is why PCP ("THC" on the street) is very dangerous mixed with alcohol. Potentiation occurs to some extent with almost all forms of downs, including smack and wine (which is what probably killed Janis Joplin as she shot up after getting drunk--Hendrix too, downers and alcohol).

Back to psychedelics, there is another numbers game that a lot of people are getting into--how many days in a row can I drop acid. What a waste of acid! First, it becomes impossible to integrate well the material that is brought up by the acid if you do not take time between trips to work on that material. Second, it scatters psychic energy all over, draining your reserve badly, similar to what a long speed run does to your physical energy. Finally, there is a tolerance problem. Psychedelics have a rapid building, rapid receding tolerance, a tolerance that crosses to other psychedelics. (When someone is tolerant to LSD, they will be cross tolerant to mescaline and psilocybin). When Baba Ram Dass (then known as Richard Alpert) and fans locked themselves in the Milbrook bowling alley building and took 400 mics of pure acid (this was in the old days!) every four hours for two weeks, they found two things. After two weeks they came down. And after the first couple of days they weren't still really tripping, they were just buzzed out. In experiments they found that on the first day the subject was really tripping on 180 mics, but on the 4th day the 180 barely effected him. A few days later, the 180 sent him heavily tripping again.

Now a final attempt to explore the numbers game, here are the "standard" (equivalent effect) dosage ranges for numerous psycho-active drugs. Remember that the same dose will not effect everyone the same way, but these are average figures.

STP (DOM) this first hit the street at 30 mg. (milligrams)

An amusing anecdote to summarize the numbers game. . . while working at a rock festival last summer I had one really zoned out young brother come up to me and say, "I've had 5 downers and 7 uppers. . . do I need two more downs?" Criminal that there is that ignorance in our people.