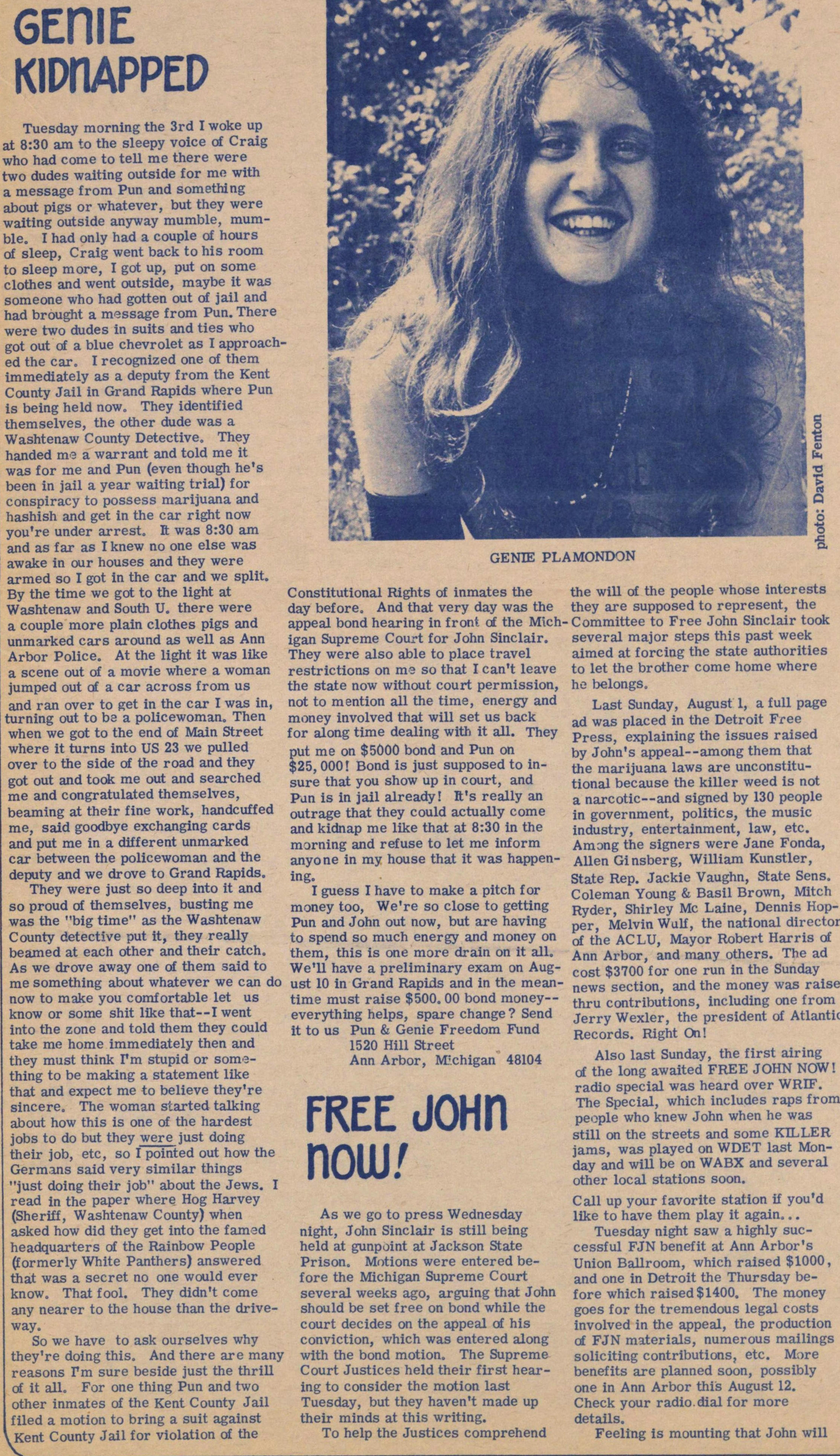 Tuesday morning the 3rd I woke up at 8:30 am to the sleepy voice oí Craig who had come to tell me there were wo dudes waiting outside for rae with a message f rom Pun and sometMng about pigs or whatever, but they were waiting outside anyway mumble, mumble. I had only had a couple oí hours of sleep, Craig went back to his room 0 sleep more, I got up, put on some c lothes and went outside, maybe it was someone who had gotten out of jail and had brought a message from Pun. There were two dudes in suits and ties who got out of a blue chevrolet as I approach;d the car. I recognized one oí them immediately as a deputy from the Kent County Jail in Grand Rapids where Pun is being held now. They identified Jiemselves, the other dude was a Washtenaw County Detective. They handed me a warrant and told me it was for me and Pun (even though he's been in jail a year waiting trial) for conspiracy to possess marijuana and hashish and get in the car right now you're under arrest. K was 8:30 am and as f ar as I knew no one else was awake in our houses and they were armed so I got in the car and we split. By the time we got to the light at Washtenaw and South U. there were a couple more plain clothes pigs and unmarked cars around as well as Ann Arbor Pólice. At the light it was like a scène out of a movie where a woman jumped out of a car across from us and ran over to get in the car I was in, turning out to be a policewoman. Then when we got to the end of Main Street where it turns into US 23 we pulled over to the side of the road and they got out and took me out and searched me and congratulated themselves, beaming at their fine work, handcuffed me, said goodbye exchanging cards and put me in a different unmarked car between the policewoman and the deputy and we drove to Grand Rapids. They were just so deep into it and so proud of themselves, busting me was the "big time" as the Washtenaw County detective put it, they really beamed at each other and their catch. As we drove away one of them said to me something about whatever we can do now to make you comfortable let us know or some shit like that - I went into the zone and told them they could take me home immediately then and they must think Fm stupid or something to be making a statement like that and expect me to believe they're sincere. The woman started talking about how this is one of the hardest jobs to do but they were just doing their job, etc, so I pointed out how the Germans said very similar things "just doing their job" about the Jews. I read in the paper where Hog Harvey (Sheriff, Washtenaw County) when asked how did they get into the famed headquarters of the Rainbow People (formerly White Panthers) answered that was a secret no one would ever know. That fooi. They didn't come any nearer to the house than the driveway. So we have to ask ourselves why they're doing this. And there are many reasons Tm sure beside just the thrill of it all. For one thing Pun and two other inmates of the Kent County Jail filed a motion to bring a suit against 1 Kent County Jail for violation of the Constitutional Rights oí inmates the day before. And that very day was the appeal bond hearing in front of the Michigan Supreme Court for John Sinclair. They were also able to place travel restrictions on me so that I can't leave the state now without court permission, not to m ention all the time, energy and money involved that will set us back for along time dealing with it all. They put me on $5000 bond and Pun on $25, 000! Bond is just supposed to insure that you show up in court, and Pan is in jail already! U's really an outrage that they could actually come and kidnap me like that at 8:30 in the morning and refuse to let me inform anyone in my house that it was happening. I guess I have to make a pitch for money too, We're so close to getting Pun and John out now, but are having to spend so much energy and money on them, this is one more drain on it all. We'll have a preliminary exam on August 10 in Grand Rapids and in the meantime must raise $500. 00 bond money- everything helps, spare change ? Send it to us Pun & Genie Freedom Fund 1520 Hill Street Ann Arbor, Michigan 48104