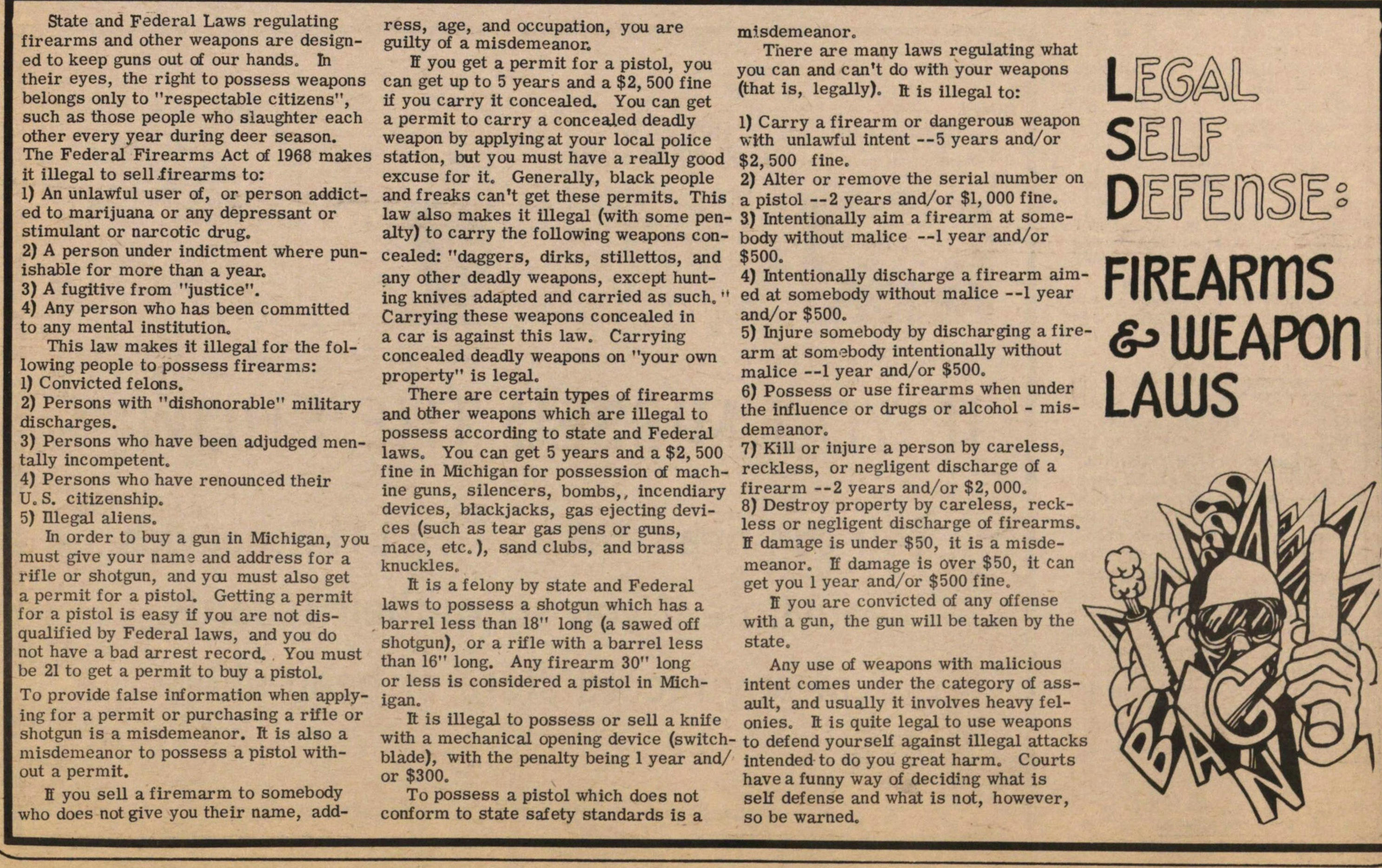 State and Federal Laws regulating firearms and other weapons are designed to keep guns out of our hands. In their eyes, the right to possess weapons belongs only to "respectable citizens", such as those people who slaughter each other every year during deer season. The Federal Firearms Act of 1968 makes it illegal to selliirearms to: 1) An unlawful user of, or person addicted to marijuana or any depressant or stimulant or narcotic drug. 2) A person under indictment where punishable for more than a year. 3) A fugitive from "justice". 4) Any person who has been committed to any mental institution. This law makes it illegal for the following people to possess firearms: 1) Convicted f elons. 2) Persons with "dishonorable" military discharges. 3) Persons who have been adjudged mentally incompetent. 4) Persons who have renounced their U. S. citizenship. 5) Illegal aliens. In order to buy a gun in Michigan, you must give your name and address for a rifle or shotgun, and you must also get a permit for a pistol. Getting a permit for a pistol is easy if you are not disqualified by Federal laws, and you do not have a bad arrest record. You must be 21 to get a permit to buy a pistol. To provide false information when applying for a permit or purchasing a rifle or shotgun is a misdemeanor. R is also a misdemeanor to possess a pistol without a permit. I you sell a firemarm to somebody who does not give you their name, add. ress, age, and occupation, you are guilty of a misdemeanor. ff you get a permit for a pistol, you can get up to 5 years and a $2, 500 fine if you carry it concealed. You can get a permit to carry a concealed deadly weapon by applyingat your local pólice station, but you must have a reaÜy good excuse for it. Generally, black people and freaks can 't get these permits. This law also makes it illegal (with some penalty) to carry the following weapons concealed: "daggers, dirks, stillettos, and any other deadly weapons, except hunting knives adapted and carried as such. " Carrying these weapons concealed in a car is against this law. Carrying concealed deadly weapons on "your own property" is legal. There are certain types of firearms and bther weapons which are illegal to possess according to state and Federal laws. You can get 5 years and a $2, 500 fine in Michigan for possession af machine guns, silencers, bombs,, incendiary devices, blackjacks, gas ejecting devices (such as tear gas pens or guns, mace, etc. ), sand clubs, and brass knuckles. ft is a f elony by state and Federal laws to possess a shotgun which has a barrel less than 18" long (a sawed off shotgun), or a rifle with a barrel less than 16" long. Any firearm 30" long or less is considered a pistol in Michigan. ft is illegal to possess or sell a knife with a mechanical opening device (switchblade), with the penalty being 1 year and or $300. To possess a pistol which does not conform to state safety standards is a mísdemeanor. There are many laws regulating what you can and can't do with your weapons (that is, legally). ft is illegal to: 1) Carry a firearm or dangerous weapon with unlawful intent - 5 years andor $2, 500 fine. 2) Alter or remove the serial number on a pistol 2 years andor $1, 000 fine. 3) Intentionally aim a firearm at somebody without malice -1 year andor $500. 4) Intentionally discharge a firearm aimed at somebody without malice - 1 year andor $500. 5) Injure somebody by discharging a firearm at som?body intentionally without malice -1 year andor $500. 6) Possess or use firearms when under the influence or drugs or alcohol - misdemeanor. 7) Kill or injure a person by careless, reckless, or negligent discharge of a firearm --2 years andor $2, 000. 8) Destroy property by careless, reckless or negligent discharge of firearms. E dam age is under $50, it is a misdemeanor. E damage is over $50, it Can get you 1 year andor $500 fine. K you are convicted of any offense with a gun, the gun will be taken by the state. Any use of weapons with malicious intent comes under the category of assault, and usually it involves heavy felonies. B is quite legal to use weapons to defend yourself against illegal attacks intended to do you great harm. Courts have a funny way of deciding what is self defense and what is not, however, so be warned.