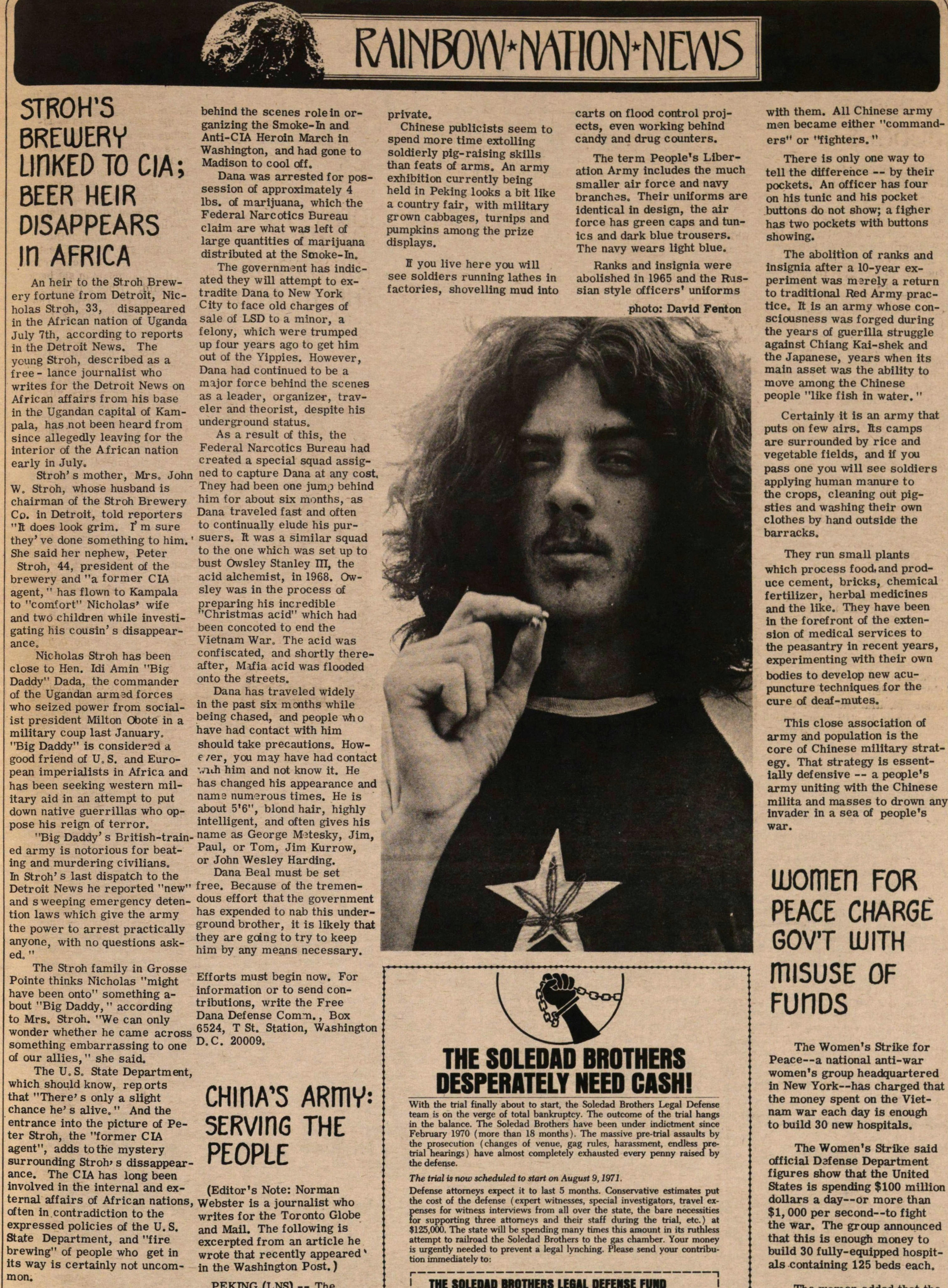 An heir to the Stroh Brewery fortune írom Detroit, Nicholas Stroh, 33, disappeared in the African nation of Uganda July 7th, according to reports in the Detroit News. The ycung Stroh, described as a free - lance journalist who writes for the Detroit News on African affairs from his base in the Ugandan capital of Kampala, has.not been heard from since allegedly leaving for the interior of the African nation early in July. Stroh' s mother, Mrs„ John W. Stroh, whose husband is chairman of the Stroh Brewery Co. in Detroit, told reporters "ft does look grim. f m sure they' ve done something to him. ' She said her nephew, Peter Stroh, 44, president of the brewery and "a former CIA agent, " has flown to Kampala to "comfort" Nicholas' wife and two children while investigating his cousin' s disappearance. Nicholas Stroh has been close to Hen. Idi Amin "Big Daddy" Dada, the commander of the Ugandan armsd f orces who seized power from socialist president Milton Obote in a military coup last January. "Big Daddy" is considered a good friend of U.S. and European imperialists in África and has been seeking western military aid in an attempt to put down native guerrillas who pose his reign of terror. "Big Daddy' s British-trained army is notorious for beating and murdering civilians. In Stroh' s last dispatch to the Detroit News he reported "new" and sweeping emergency detention laws which give the army the power to arrest practically anyone, with no questions asked. " The Stroh family in Grosse Pointe thinks Nicholas "might have been onto" something about "Big Daddy, " according to Mrs. Stroh. "We can only wonder whether he carne across something embarrassing to one of our allies, " she said. The U.S. State Department, which should know, rep orts that "There' s only a slight chance he' s alive. " And the entrance into the picture of Peter Stroh, the "former CIA agent", adds tothe mystery surrounding Stroh s dissappearance. The CIA has long been involved in the internal and external affairs of African nations, often in contradiction to the expressed policies of the U. S. State Department, and "fire brewing" of people who get in its way is certainly not uncommon.