Atropine and Belladonna Alkaloids Last i... 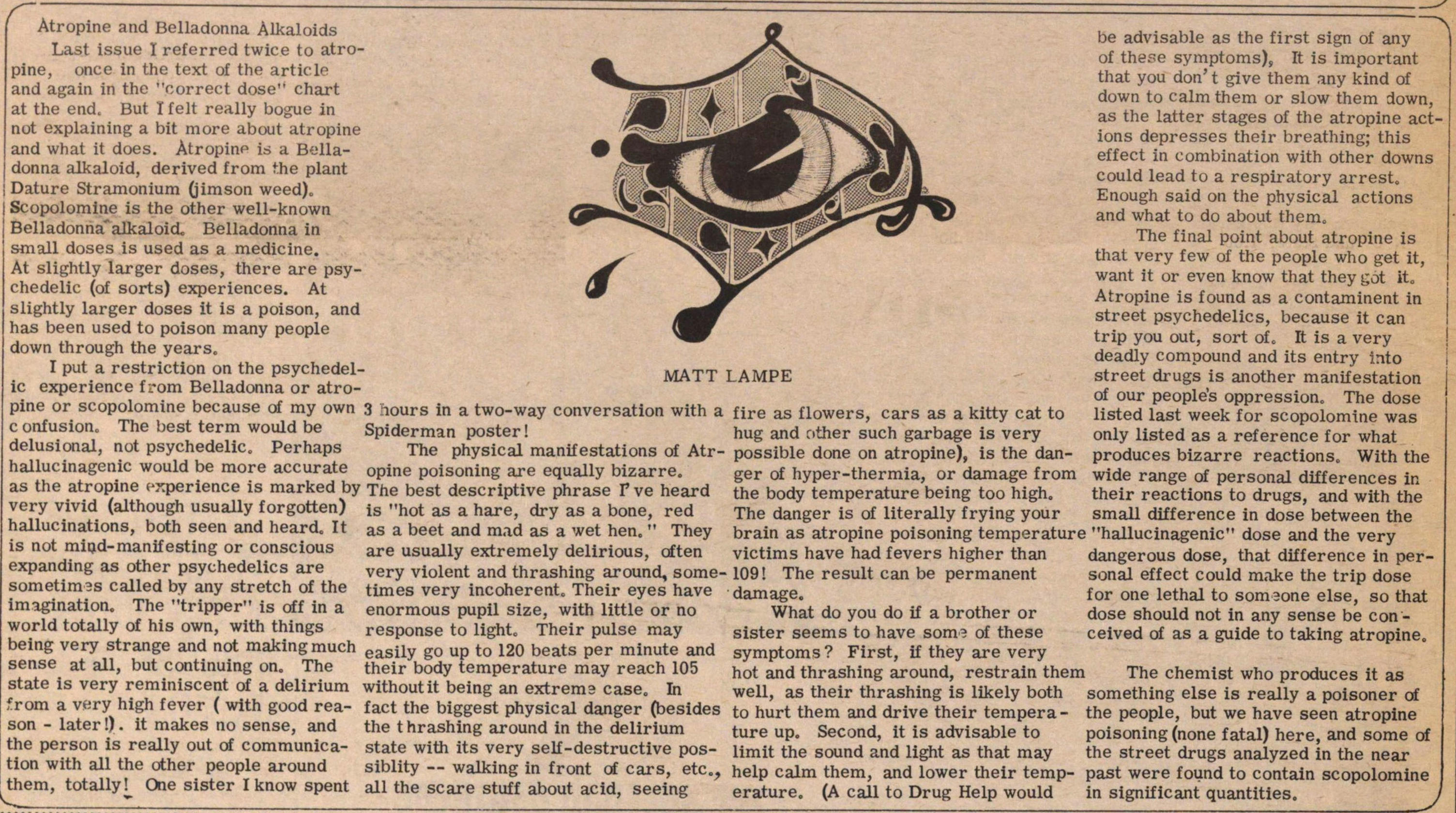 Atropine and Belladonna Alkaloids Last issue ï referred twice to atropine, once in the text of the article and again in the "correct dose" chart at the end, But I feit really bogue in not explaining a bit more about atropine and what it does. Átropinp is a Belladonna alkaloid, derived from the plant Dature Stramonium (jimson weed). Scopolomine is the other well-known Belladonna' alkaloid. Belladonna in sniall doses is used as a medicine. At slightly larger doses, there are psychedelic (of sorts) experiences. At slightly larger doses it is a poison, and has been used to poison many people down through the years. I put a restriction on the ie experience f rom Belladonna or atropine or scopolomine because of my own c onfusion. The best term would be delusional, not psychedelic. Perhaps hallucinagenic would be more accurate as the atropine experience is marked by very vivid (although usually forgotten) hauucinations, both seen and heard„ It is not miod-manifesting or conscious expanding as other psychedelics are sometimss called by any stretch of the imagination. The "tripper" is off in a world totally of his own, with things being very strange and not making much sense at all, but continuing on. The state is very reminiscent of a delirium ■ f rom a very high f ever ( with good reason - later !) . it makes no sense, and the person is really out of communication with all the other people around them, totally! One sister I know spent _ 3 hours in a two-way conversation with a Spiderman poster! The physical manifestations of Atropine poisoning are equally bizarre. The best descriptive phrase F ve heard is "hot as a hare, dry as a bone, red as a beet and mad as a wet hen. " They are usually extremely delirious, cften very violent and thrashing around, sometimes very incoherent. Their eyes have enormous pupil size, with little or no response to light. Their pulse may easily go up to 120 beats per minute and their body temperature may reach 105 withoutit being an extrema case. In f act the biggest physical danger (besides the t hrashing around in the delirium state with its very self-destructive possiblity - walking in front of cars, etc, all the scare stuff about acid, seeing fire as ílowers, cars as a kitty cat to hug and nther such garbage is very possible done on atropine), is the danger of hyper-thermia, or damage írom the body temperature being too high. The danger is of literally frying your brain as atropine poisoning temperature victims have had fevers higher than 109! The result can be permanent damage. What do you do if a brother or sister seems to have som? of these symptoms ? First, if they are very hot and thrashing around, restrain them well, as their thrashing is likely both to hurt them and drive their tempera - ture up. Second, it is advisable to limit the sound and light as that may help calm them, and lower their temperature. (A cali to Drug Help would be advisable as the first sign of any of these symptoms), It is important that you don' t give them any kind of down to calm them or slow them down, as the latter stages of the atropine actions depresses their breathing; this effect in combination with other downs could lead to a respiratory arrest. Enough said on the physical actions and what to do about them. The final point about atropine is that very few of the people who get it, want it or even know that they got it. Atropine is found as a contaminent in street psychedelics, because it can trip you out, sort oí. It is a very deadly compound and its entry into street drugs is another manifestation oí our people's oppression. The dose listed last week for scopolomine was only listed as a reference for what produces bizarre reactions„ With the wide range of personal diff er enees in their reactions to drugs, and with the small difference in dose between the "hallucinagenic" dose and the very dangerous dose, that difference in personal effect could make the trip dose for one lethal to someone else, so that dose should not in any sense be conceived of as a guide to taking atropine. The chemist who produces it as something else is really a poisoner of the people, but we have seen atropine poisoning (none fatal) here, and some of the street drugs analyzed in the near past were found to contain scopolomine in significant quantities.