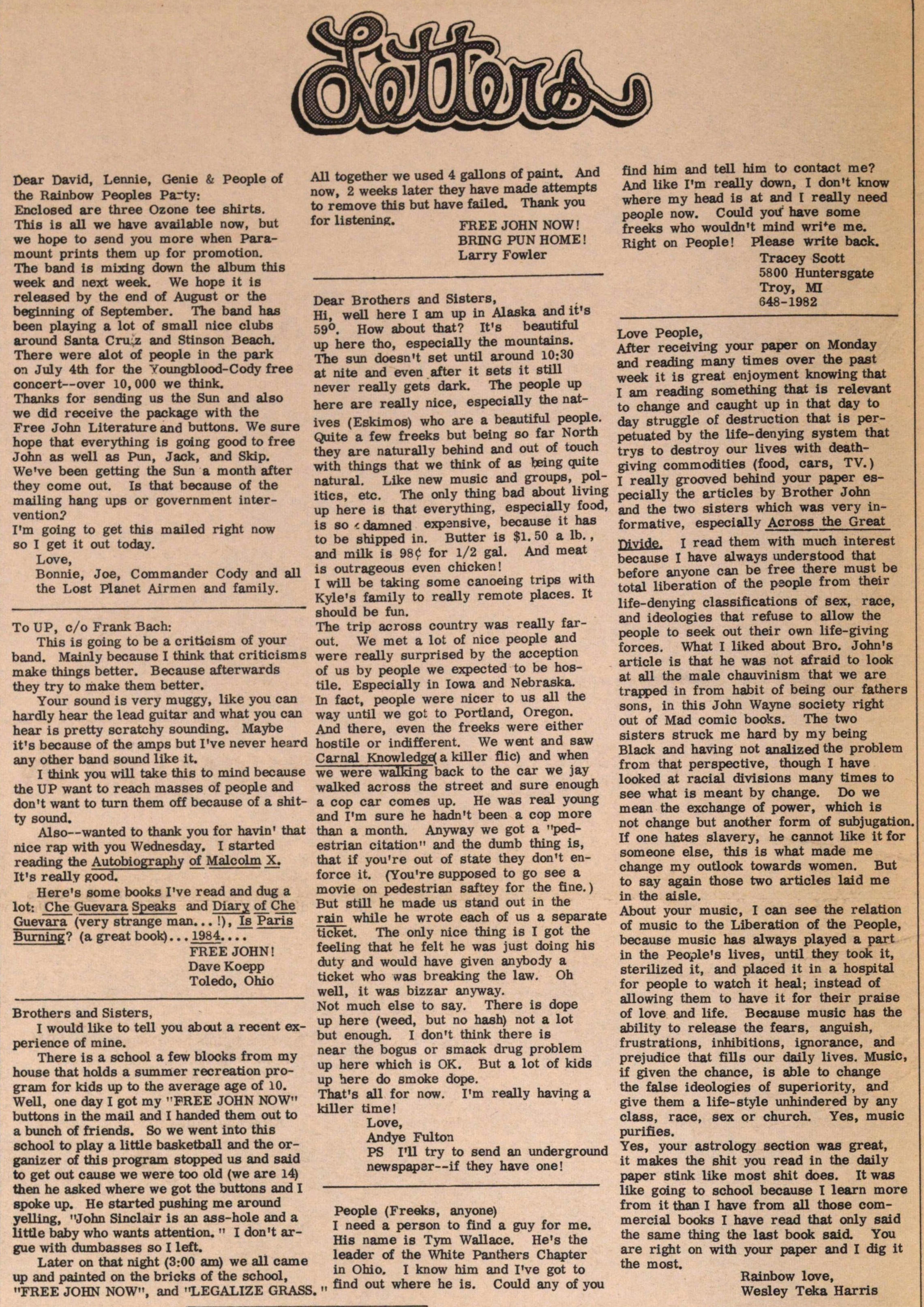 Enclosed are three Ozone tee shirts. This is all we have available now, but we hope to send you more when Paramount prints them up for promotion. The band is mixing down the album this week and next week. We hope it is released by the end of August or the beginning of September. The band has been playing a lot of small nice clubs around Santa Cruz and Stinson Beach. There were alot of people in the park on July 4th for the Youngblood-Cody free concert - over 10, 000 we think.

Thanks for sending us the Sun and also we did receive the package with the Free John Literature and buttons. We sure hope that everything is going good to free John as well as Pun, Jack, and Skip. We've been getting the Sun a month after they come out. Is that because of the mailing hang ups or government intervention?

I'm going to get this mailed right now so I get it out today.

Love, Bonnie, Joe, Commander Cody and all the Lost Planet Airmen and family.

To UP, co Frank Bach:

This is going to be a criticism of your band. Mainly because I think that criticisms make things better. Because afterwards they try to make them better.

Your sound is very muggy, like you can hardly hear the lead guitar and what you can hear is pretty scratchy sounding. Maybe it's because of the amps but I've never heard any other band sound like it.

I think you will take this to mind because the UP want to reach masses of people and don't want to turn them off because of a shitty sound.

Also - wanted to thank you for havin' that nice rap with you Wednesday. I started reading the Autobiography of Malcolm X. It's really Rood.

Brothers and Sisters, I would like to tell you about a recent experience of mine.

There is a school a few blocks from my house that holds a summer recreation program for kids up to the average age of 10. Well, one day I got my "FREE JOHN NOW" buttons in the mail and I handed them out to a bunch of friends. So we went into this school to play a little basketball and the organizer of this program stopped us and said to get out cause we were too old (we are 14) then he asked where we got the buttons and I spoke up. He started pushing me around yelling, "John Sinclair is an ass-hole and a little baby who wants attention." I don't argue with dumbasses so I left.

Later on that night (3:00 am) we all came up and painted on the bricks of the school, "FREE JOHN NOW", and "LEGALIZE GRASS." All together we used 4 gallons of paint. And now, 2 weeks later they have made attempts to remove this but have failed. Thank you for listening.

Hi, well here I am up in Alaska and it's 59°. How about that? It's beautiful up here tho, especially the mountains. The sun doesn't set until around 10:30 at nite and even after it sets it still never really gets dark. The people up here are really nice, especially the natives (Eskimos) who are a beautiful people. Quite a few freeks but being so far North they are naturally behind and out of touch with things that we think of as being quite natural. Like new music and groups, politics, etc. The only thing bad about living up here is that everything, especially food, is so damned expansive, because it has to be shipped in. Butter is $1.50 a Ib., and milk is 98c for 12 gal. And meat is outrageous even chicken!

I will be taking some canoeing trips with Kyle's family to really remote places. It should be fun.

The trip across country was really far-out. We met a lot of nice people and were really surprised by the acception of us by people we expected to be hostile. Especially in Iowa and Nebraska. In fact, people were nicer to us all the way until we got to Portland, Oregon. And there, even the freeks were either hostile or indifferent. We went and saw Carnal Knowledge (a killer flic) and when we were walking back to the car we jay walked across the street and sure enough a cop car comes up. He was real young and I'm sure he hadn't been a cop more than a month. Anyway we got a "pedestrian citation" and the dumb thing is, that if you're out of state they don't enforce it. (You're supposed to go see a movie on pedestrian saftey for the fine.) But still he made us stand out in the rain while he wrote each of us a separate ticket. The only nice thing is I got the feeling that he felt he was just doing his duty and would have given anybody a ticket who was breaking the law. Oh well, it was bizzar anyway.

Not much else to say. There is dope up here (weed, but no hash) not a lot but enough. I don't think there is near the bogus or smack drug problem up here which is OK. But a lot of kids up here do smoke dope.

That's all for now. I'm really having a killer time!

PS I'll try to send an underground if they have one!

I need a person to find a guy for me. His name is Tym Wallace. He's the leader of the White Panthers Chapter in Ohio. I know him and I've got to find out where he is. Could any of you find him and tell him to contact me? And like I'm really down, I don't know where my head is at and I really need people now. Could you have some freeks who wouldn't mind write me. Right on People! Please write back.

After receiving your paper on Monday and reading many times over the past week it is great enjoyment knowing that I am reading something that is relevant to change and caught up in that day to day struggle of destruction that is perpetuated by the life-denying system that trys to destroy our lives with death-giving commodities (food, cars, TV.) I really grooved behind your paper especially the articles by Brother John and the two sisters which was very informative, especially Across the Great Divide. I read them with much interest because I have always understood that before anyone can be free there must be total liberation of the people from their life-denying classifications of sex, race, and ideologies that refuse to allow the people to seek out their own life-giving forces. What I liked about Bro. John's article is that he was not afraid to look at all the male chauvinism that we are trapped in from habit of being our fathers sons, in this John Wayne society right out of Mad comic books. The two sisters struck me hard by my being Black and having not analized the problem from that perspective, though I have looked at racial divisions many times to see what is meant by change. Do we mean the exchange of power, which is not change but another form of subjugation. If one hates slavery, he cannot like it for someone else, this is what made me change my outlook towards women. But to say again those two articles laid me in the aisle.

About your music, I can see the relation of music to the Liberation of the People, because music has always played a part in the People's lives, until they took it, sterilized it, and placed it in a hospital for people to watch it heal; instead of allowing them to have it for their praise of love and life. Because music has the ability to release the fears, anguish, frustrations, inhibitions, ignorance, and prejudice that fills our daily lives. Music, if given the chance, is able to change the false ideologies of superiority, and give them a life-style unhindered by any class, race, sex or church. Yes, music purifies.

Yes, your astrology section was great, it makes the shit you read in the daily paper stink like most shit does. It was like going to school because I learn more from it than I have from all those commercial books I have read that only said the same thing the last book said. You are right on with your paper and I dig it the most.