Pun On The Vote 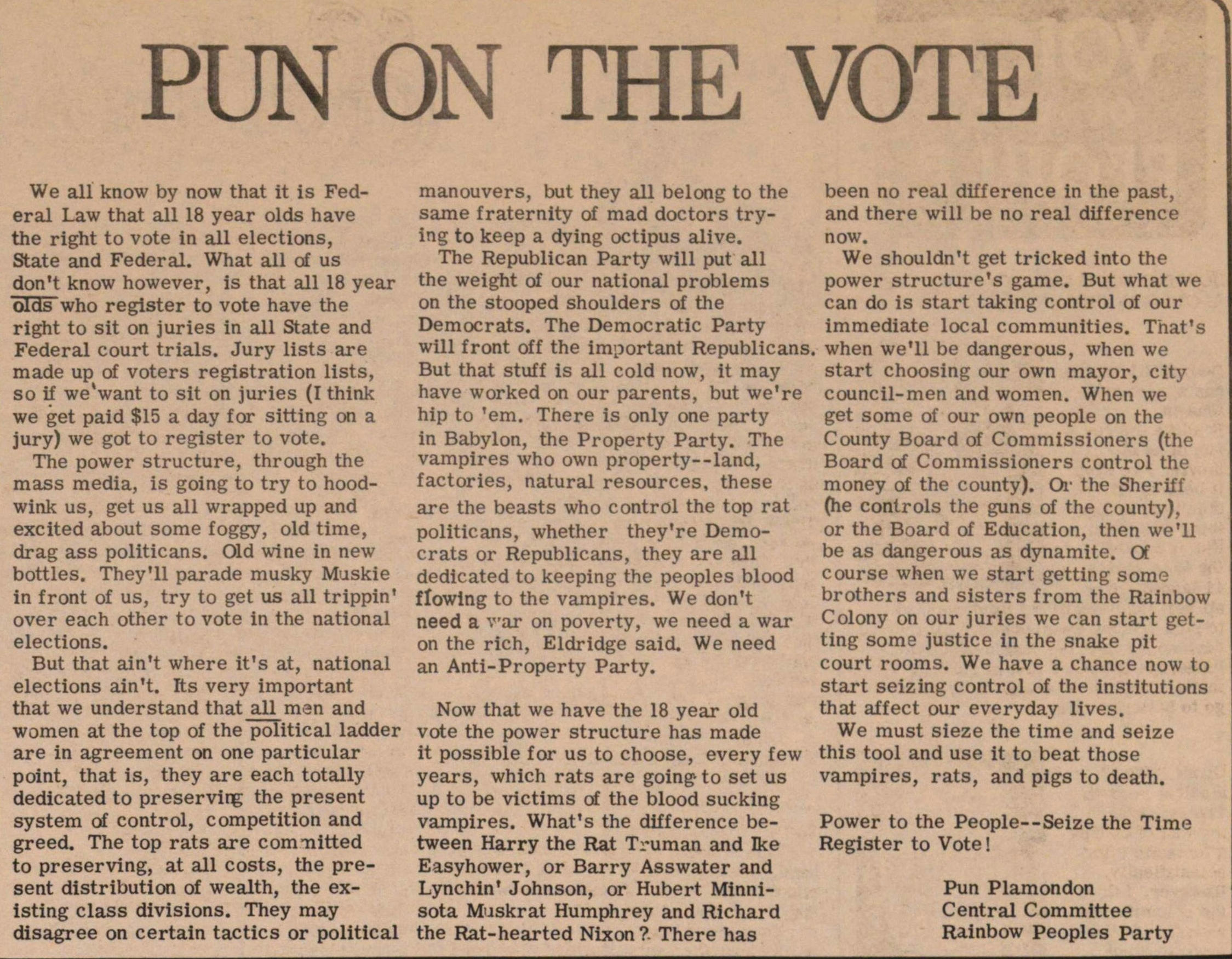 We all know by now that it is Federal Law that all 18 year olds have the right to vote in all elections, State and Federal. What all of us don't know however, is that all 18 year olds who register to vote have the right to sit on juries in all State and Federal court trials. Jury lists are made up of voters registration lists, so if we want to sit on juries (I think we get paid $15 a day for sitting on a jury) we got to register to vote.

The power structure, through the mass media, is going to try to hoodwink us, get us all wrapped up and excited about some foggy, old time, drag ass politicans. Old wine in new bottles. They'll parade musky Muskie in front of us, try to get us all trippin' over each other to vote in the national elections.

But that ain't where it's at, national elections ain't. Its very important that we understand that all men and women at the top of the political ladder are in agreement on one particular point, that is, they are each totally dedicated to preserving the present system of control, competition and greed. The top rats are committed to preserving, at all costs, the present distribution of wealth, the existing class divisions. They may disagree on certain tactics or political manouvers, but they all belong to the same fraternity of mad doctors trying to keep a dying octipus alive.

The Republican Party will put all the weight of our national problems on the stooped shoulders of the Democrats. The Democratic Party will front off the important Republicans. But that stuff is all cold now, it may have worked on our parents, but we're hip to 'em. There is only one party in Babylon, the Property Party. The vampires who own property - land, factories, natural resources, these are the beasts who control the top rat politicans, whether they're Democrats or Republicans, they are all dedicated to keeping the peoples blood flowing to the vampires. We don't need a war on poverty, we need a war on the rich, Eldridge said. We need an Anti-Property Party.

Now that we have the 18 year old vote the power structure has made it possible for us to choose, every few years, which rats are to set us up to be victims of the blood sucking vampires. What's the difference between Harry the Rat Truman and Ike Easyhower, or Barry Asswater and Lynchin' Johnson, or Hubert Minnisota Muskrat Humphrey and Richard the Rat-hearted Nixon? There has been no real difference in the past, and there will be no real difference now.

We shouldn't get tricked into the power structure's game. But what we can do is start taking control of our immediate local communities. That's when we'll be dangerous, when we start choosing our own mayor, city council-men and women. When we get some of our own people on the County Board of Commissioners (the Board of Commissioners control the money of the county). Or the Sheriff (he controls the guns of the county), or the Board of Education, then we'll be as dangerous as dynamite. Of course when we start getting some brothers and sisters from the Rainbow Colony on our juries we can start getting some justice in the snake pit court rooms. We have a chance now to start seizing control of the institutions that affect our everyday lives.

We must sieze the time and seize this tool and use it to beat those vampires, rats, and pigs to death. Power to the People -Seize the Time